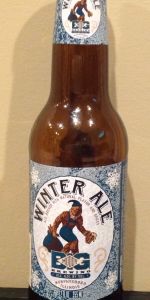 Brown to caramel in color with an fingernail of creamy beige on top. The aroma is of ginger and nutmeg. I'm tasting ginger and some dark malt. The mouth is light and quaffable.

Welcome to my Bonne Bière d'Hiver Nouveau Dimanche (Happy New Winter Beer Sunday)! This bottle was a recent acquisition from The Friendly Greek Bottle Shop here in Lancaster, PA & with mud sales (really!) on the horizon as Winter comes to an end, this seemed to be a natural!

I am unsure about the label. Is Sasquatch carrying a bagful of cinnamon sticks while hoisting a foamy mug of beer?!? Well, now! If that is the case, Sasq is always welcome at Chez Woody!

I do not know how I intuited it, but somehow I knew that it was a screw-top cap. Aw, no Pop! with Sasq. I went with a gentle Glug so as not to disturb him, even though he was my visitor. a solid swirl awoke a finger of dense, foamy, light-tan head with good retention. Color was Brown to Dark Brown (SRM = > 22, < 27) with filament brightness and garnet highlights. Nose smelled like Mexican Chocolate! Milk chocolate with cinnamon & nutmeg! Oh, man, when I was just a wee lad, one of the mothers of Central American descent of one of my fellow students served that at lunch. My young mind = blown! Today, my mind = equally blown! I get the idea of Winter/Christmas beers as being spiced, but when they follow quickly on the heels of Fall/Pumpkin beers with their inherent spices, I get bored quickly. Mouthfeel was thin-to-medium. The taste was just like spiced cocoa! If you can still find this, put some aside until either the next snowfall of this Winter or the first snowfall of next Winter, buy a double-boiler set of pots in the interim & when it snows, warm this up and serve it in mugs. You may thank me later. Finish was in the twilight zone of semi-sweet & semi-dry since the chocolatiness was cut by the spices. As a beer, it was decent, but I would bet that as an apres-ski or apres-anything hiver, it would be a winner. Presentation is key in this case!

12oz bottle, no date. Pours clear reddish amber with a medium off-white head. Smells strongly of cinnamon and vanilla with some sweet malt and ginger. The taste follows very closely but with more vanilla and malt; less intense than the smell suggests. Some slight sweetness in the finish. Below average body and above average carbonation. Overall, this is a very spice-forward WW which could use more of a malt backbone.

From a 12 ounce bottle, this brew is a deep, murky brown color, capped with a large-bubbled, lightly tan head. The aroma is concentrated with cinnamon, sugar, nutmeg, and malt. It's reminiscent of a cinnamon donut, if you added malt extract. The flavor is similar...lots of spice, a bit of malt, and some underlying sweetness. The spice dominates the beer. At first, it is pleasant and enjoyable, but it does become a little overpowering. Spice in the finish as well. Interesting, good, but not exceptionally drinkable.

A: Coffee pour, with a dark creamy, khaki colored head of moderate retention. Steady rising carbonation along the sides.

O: Overall a bit overly sweet for my liking, overly spiced with cinnamon toast, some chocolate and coffee that is limited in drinkability. One is plenty, no repeat or repurchase factor.

Just how I like my winters: big and muddy. Anyway, this stuff pours a midnight sienna topped by a finger of dirty khaki foam. The nose is a wave of sweet French toast (laden with maple syrup, o' course) with a nice helping of extra brown sugar on top for the beauty of it. The taste holds notes of caramel, brown sugar, cinnamon, and dried maple syrup. Not quite as rich and memorable as the smell, but a rather tasty concoction regardless. The body is a light medium, with a light moderate carbonation and a fluid feel. Overall, an enjoyable spiced winter warmer. Straight up.

Poured out a light burgundy color with a white, one-finger head. It left traces of lace. It smelled of roasted malt and grassy hops. It tasted bittersweet with a nice hoppy and malty quality. It was crisp and sharp. A medium-bodied beer.

I picked up mixed brewery hand-picked variety pack at the Lawrenceville NJ Joe Canal’s. Among the beers was this Big Muddy Brewery Winter Ale. 12-ounce bottle, which I poured into my Duvel Belgian Tulip glass for tasting purposes.

A: A slightly thicker pour resulted in a thin off-white head. The color was dark maple brown sugar in appearance. Lacing clung tight initially, but reduced quickly as I tilted my glass.

S: I could actually smell the spices as soon as I popped open the bottle. Winter in a glass I would say. Sweet gingerbread cookies tingles the nose right way. Perhaps a hint of vanilla and brown sugar mixed with cinnamon comes in close second, but the sweet gingerbread aroma is prominent and enticing.

T: If I ever had a beer, which I’m proud to say I have had plenty of different styles from an abundance of breweries, whereby the taste equates to the smell, this one matches like no other. Sweet, but not overly sweet, gingerbread cookies snaps the tongue to attention immediately. Hints of bready malt, cinnamon, vanilla mix with the gingerbread flavor. I really like this one a lot.

M: Perfect balance of carbonation makes this beer easy drinking for Winter Ale. At a mild 6% (for Winter Ale) I could really see myself have at least two in a sitting. I normally don’t do back-to-back Winter Ales, but I would make an exception for this one.

O: First reaction: This by far one of the best Winter Ales that I have ever had. Just the right amount of spice. If you don't like spices in your beer then you may not enjoy this one as much as I did. How could I have not had a beer from Big Muddy before this one? To be honest, this was the first Big Muddy beer I found on the East Coast. I am respectfully requesting they send us more…

Winter Ale from Big Muddy Brewing
Beer rating: 83 out of 100 with 34 ratings