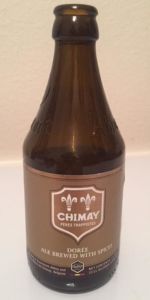 The Chimay Gold, which is brewed in the heart of Scourmont Abbey, was for long reserved for the monastic community and its guests and staff. Its refreshing aromas of hops and spice are now yours to try.

L: Pours a very cloudy light brown color, light orange when held to the light, accompanied by a tall white head with good retention.
S: Smells rich of fruits, citrus, apple, fair amount of malts.
T: Follows the nose, has a bit of a banana aftertaste.
F: Medium-bodied, high carbonation, crisp.
O: Heard a lot of hype behind this beer, just not for me.

I had this on draft.. I’d love to find a bottle of it! Just so I know the pour and all that comes from reviewing a brew at home. However, the authentic Chimay glass from this place did sort of make me feel at home

A faded golden, nearing burnished brass body that has a fair amount of haze. Head is a typical fluffy white with loose structure that produces abstract lacing. Nose is ripe with esters as much as spices, producing a fruit pie impression - pear and apple, with some hints of nectarine. Spice notes are familiar, coriander, clove, maybe nutmeg.

Biting carbonation on a less sweet than expected opening. Warmth brings a little more sweetness - partially in banana form, but a drier grain note still comes through. There's a slightly herbal note before some peppery back end notes. The beginning and end have the orchard fruit notes coming through more than the middle which has the grain, herbal, and pepper notes.

The components of this beer are interesting, and there's something to each component that I like, but somehow the coming together of all these things don't work as well as I'd expect.

330ml bottle, best before 06/2022, poured into a tulip.
Look: Pale gold, a little bit of haze, a gently pour leads to about 3 or cm of fluffy white head. Pretty good head retention. Looks good.
Smell: A little yeast to begin, a bit of clove and spice, there is a little sweetness underneath that I can't quite put my finger on, a little bubblegum maybe. There is also a little bit of fruitiness as well.
Taste: Pretty earthy and yeasty. There is some spice as well, mainly clove. Some banana and bubblegum come through a little on the back end.
Feel: lighter bodied, a slight bitterness rounds it out and I found it a little oily towards the end. Dry finish.
Overall: Not bad. Great nose, but overall I guess I wanted a bit more from it. Easy drinking though.

A - Hazy medium to dark gold color with a very thick, dense one fingered layer of creamy foam that doesn't subside. Carbonation is moderate and steady.

S - Sweet light Belgian candy sugar malt aroma with some delicate spice/. Overall, the aroma is "dry" on the nose.

T - Sweet sweet, light Belgian candy sugar, some slight earthiness, just a touch of citrus, and delicate spice surfaces towards the end of the sip. Finishes on the sweeter side and overall flavor seems to be pretty subdued.

O - Having Chimay beers in the past, they are usually packed full of flavor, this one tastes like it might have been sitting around for awhile and unfortunately the stamps on the bottle don't make any sense. It's solid and glad to have tried it, probably wouldn't try it again, though.

A welcome alternative to other Chimay ales which are stronger both in alcohol and flavour. Not a problem though. Doreé is hard to find (I only find it at BevMo when the four pack of ale and goblet are sold together.

Something a bit different from Chimay for me, I've previously only had their Red and Triple (aka. Cinq-Cents). I've also a Chimay Blue to enjoy soon. This Doree will be the first Chimay beer I've had that's sub-5%, and the ABV% has been a contributing factor to buying their beers - so will this 4.8% do enough in it's own right to impress... ?

L- Prepare to pour slowly, this was v well rested and chilled, yet it was so keen to yield head it took a while to pour. Pours pale amber, with slight haze and 1-2Cm pillowy head. Much sediment left in bottle. Head forms lacing all the way down, impressive.
S- It has something akin to Weissbrau notes present, but in an er... pungent/sour form?
T- The taste follows the smell really closely. But now the 'sour' aspect is a bit clearer, it's not actually sour, it reminds me of aromatic timber or herbs.
F- It probably does feel it's ABV, neither +/-. It isn't rich or austere either, though...
O- ... I'm not sure if it's sessionable as the taste is idiosyncratic and might jade my palate fast. It's something different to have tried but it's not doing much at all for me.
Bought from TremblingMadness/York for home delivery to London. 330ml bottle £2.20 BB: 02/22

Refreshing trappist ale by the monks of Chimay. Crisp and fresh, smooth and fresh. Hints of citrus, apple, bread, fresh yeast and lemongrass. Only 4,8% Abv, an ideal summer ale.

Appearance: Poured with a solid thumb of head that retained like crazy, has perpetually high carbonation in it's cloudy gold body and made some modest lacing. That said, even after leaving the bottom of the bottle alone, quite a bit of particulate yeast can be found in the brew.

Smell: Fruit by far is by far the dominant part of the nose, mostly apple and pear with apricot and even banana backed behind coriander and light cloves with also hints of doughy malt and floral hops. Warming certainly helps it's cause, and if the potency was rampped up a bit more I think you'd hit a perfect, if not close. It's interesting, like a traditional high malt Belgian beer crossed with a Wit.

Taste: There's a almost stale bread note to the entire beer, which I know the yeast is causing as it is also paired with an apricot taste to it. The body starts with a mild lemon note that turns to a barely toasted bread and spice note that finishes with a floral sweep. It's good, but it the yeast seems out of balance here.

Mouthfeel: That stale bread note I mentioned makes the beer fairly dry, and not it a good way. It has a soapy kind of cleaning of the palate and the end which I would normally applaud, but that dry note makes it come across as more of a scouring pad scraping the tongue clean. The carbonation is done really well and the transitioning is good...but I'm also noticing the particulate, which while not outright gritty seems noticeable.

Drinkability: Light bodied and settles down well, but the dry notes stop it from being refreshing. It's something that's a bit too high class to be approachable but seems to hit all the wrong buttons as far as what I would want from said class.

Final Thoughts: I think with less of a yeast presence I would really enjoy this beer, but it really is the elephant in the room here. I mean, it's still a good beer, don't get me wrong, but it just isn't hitting the right buttons for me.

Poured into a pint glass. Hazy pale gold with a thin head that sticks around. Lots of lacing.

Look: Pale yellow, hazy and straw like. Generous white foamy head that dissipates in minutes.
Smell: Banana, soap, flowers
Taste: Fruity. hint of lemon and soap, light bubblegum taste. Crisp on the back end.
Feel: Soft and soapy. Lives all in the front of the mouth, not much happens past the middle of the tongue.
Overall this beer earns a B+

Poured from a 330 mL bottle into a goblet.

Smell - Floral and spicy. Very light and delicate though, you really have to dig for it.

Taste - An air of sweet lemon with a sprinkle of baking spices. Light and easy going, this would make a good summer sipper.

Feel - Medium-thin body with a gentle caress of carbonation. An easy drinker.

Overall - Simple and brilliant. Light and refreshing. This is a good one.

Poured from a brown 11.2 oz. bottle. Has a cloudy, light brown color with a 1/2 inch head and plenty of carbonation. Smell is full of fruits, cherries stand out. Taste is the same as the aroma, light malts, a touch of spices. Feels medium/full bodied in the mouth and overall is an enjoyable beer.

Poured in the Chimay chalice. Tall cloud of white foam on nearly clear yellowish beer. More clouds of carbonation as it melts in the mouth. Very light-bodied otherwise. Aromatic with the classic Belgian yeast, though skewed to the bubblegum side. Fruity with notes of pear, apple, sweet bread, and coriander.

It's hard to compare this with other Belgian pale ales. It's more of a Witbier sired by a Hefeweizen. Technically, a Patersbier, it's the lighter beer meant for the Fathers. I'd just call it unique. From the stubby 330 ml bottle-- a four-pack with glass from a giant retailer before Christmas.

The feel is almost perfect, which makes up for the lackluster flavour and extra dose of sugar. Could be a beer to draw your Molson-drinking friends into the world of trappist brews.

Smell - Sweet honey, subtle candi sugar, yeasty with some light stone fruits lurking in behind. Soft and delicate aroma. Quite similar to their tripel (white) but dialled way back. A touch of clove and coriander too.

Taste - Light flavors, some yeast, honey, slight bit of candi sugar and subtle peaches and plums. Not particularly intense but well crafted. Bready flavors throughout. Clove and coriander make an appearance after repeated sips. Flavors may be a touch too light.

Overall - Chimay Doree or Chimay Gold (as listed here) is a very nice, modest strength Belgian Pale ale that packs much of the deliciousness of its bigger and boozier sibling into a small neat and delicate package. Definitely worth a try and very happy to have tried this for a milestone review.

Poured from 12oz bottle into Tulip.

S: Spices like coriander and clove are at the forefront. Faint fruit in the middle with some apple and banana. The finish is a touch of orange peel and a slight bready note.

T: Follows closely to the aroma, with spices and fruit and a touch of breadiness. Wonderful.

From the bottle into a Chimay glass, it pours a hazy amber with a white head that soon diminishes to a thin layer. In the nose, it is slightly fresh with some orange peel and spice. In the mouth, it is fresh tasting and a little bready.

Aromas of wheat, orange peel, light spices, pretty much like a witbier imo.

Taste follows the nose, the body being more dense than you'd imagine for a 4,8% beer. Tastes fresh.

Mouthfeel is medium, not a hint of alcohol. Fruity and spicy aftertaste.

Nice beer, not the most complex of the Chimay line up but really good to pair with some cheese.