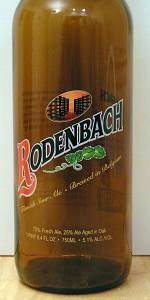 A: Pours a dark amber color with a fluffy tan colored head. retention is pretty decent but lacing is just okay for the abv/genre.

F: About as close to perfect as it gets for the genre. Super light and fluffy. Really helps to make this beer as refreshing as it gets.

O: This is a very good "casual"/refreshing sour that doesn't command 100% of your attention. It's a great beer to have on a summer day I bet. Very very good.

L: Russet colour with a ruby core. Many streams of bubbles. Thin head quickly turns to a ring.
S: Red wine vinegar.
T: Tart & fruity. Sweet & sour finish.
F: Clean, sharp, refreshing.
O: I’m not averse to a sour but I’m struggling a little with this one. Not sure why. Improved as it warmed but too much vinegar up-front for me.

500mL can stamped CNxh50847R poured into a Duvel glass at fridge temp 5.2% ABV. The beer brown with ruby red highlights and meager light khaki head. The head recedes to a thin ring and single layer of bubbles. Minimal lacing. The aroma is faint with red grapes and tart yeast. The taste is tart, yet barely sweet, red grape juice with yeasty funk rising the longer it stays on the tongue. There's slight oak and tannins as well with a midly bitter finish. The mouthfeel is medium to thin bodied with average carbonation and a mostly dry finish. Overall, good. Not my style, but I couldn't turn down the chance to sample a single at a bargain price (compared to the bottles).

Pours a muddy burgundy with a finger of khaki head. Head is more fizzy than foamy and doesn't retain long. Aroma is plum, burnt sugar, grapes, dough, toffee and biscuit malts. Flavor profile is plum, grape, toffee, caramel and biscuit, bread, and caramel malts. It has a lightly yeasty, sour finish leaving a lingering sourness on the tongue for a while. Mouth feel is medium in thickness with a smooth, velvety texture. Overall, flavorful, but youthful. A lot of flavor for a standard 5% ABV, landing a similar experience as its heavier relatives.

Served in a 12oz snifter from a 12oz bottle.

Nice lunch or dinner red light sour that goes well with most anything .. Not on the level of the more premium Rodenbach offerings, but the price reflects that . This one is more of a daily drinker that I would recommend to most anyone that likes this style .

Pours a deep amber - red with nice micro bubble foam head. Nose is sour cherry, reminds me of a framboise Flavor is mostly cherry, some raspberry, reminds me of a light wine. Sweet and sour, has a nice tart finish. Carbonation had a fizzy quality. Overall this is a flavorful and light bodied beer, very enjoyable.

Another fine offering from Rodenbach -- and unlike Alexander and Caractere Rouge, this one is impressively reasonable in price! More malty than their other offerings, with that same lightly smacky tartness that doesn't overwhelm the nuances in the yeast that is used.

Pours a murky combination of dark amber/red and brown. The carbonation is visible through the darkness as is a fingernail length foam head. The head dissipates and leaves a silky swirl of film and frothy lacing that retains throughout.
The nose is dominated by fruit, mainly cherries and sour plum. There is also a caramel sweetness that contrasts nicely with a light lemon acidity.
Light in the mouth, silky and with a dry finish. A nice balance of tartness that is not overly acidic and fruit-cherry and plum-that is not overly sweet and syrupy. The carbonation is relatively gentle but provides enough of a tingle. Simple and complex, there is even the lightest hint of peppery spice and hops bitterness.. It has enough complexity to remain interesting and not a one dimensional sour. I would have again.
Refreshing and easy to drink

A: Pours a murky bloody brown. Head dies away fast. Very effervescent.
S: Apple cider vinegar, grape must, raisin. Very winey.
T: Tartness and a bit of sweetness up front. Fruity flavors like grape, strawberry, and hint of citrus in the middle. Finishes with a yeasty sourness.
M: Light-medium.
O: I think I like this a little more than Duchesse de Bourgogne. A little more well-rounded.

Pours a small head, only a thin ring of retention.

Surprisingly light on the tart/funk. Okay, but I expected more.

Rodenbach is one of my favorite breweries, so I was surprised that I had never rated this. Ah well, poured from the bottle into the correct glassware at Pressklubben in Stockholm.

Smell is tart with cherries and some vanilla at the forefront, backed up by some cranberries.

Taste is a bit sweet and sour, with lashings of cherries, strawberries and vanilla covering the tongue. Taste is fairy mild, but still lasts a long time on the pallette.

Mouthfeel is thin and bubbly.

It's very apparent that this is the younger sibling of the Grand Cru. It has most of the same taste profile, but lighter and milder. Superbly easy to drink, and so refreshing.

I had this one on tap at a cafe in Flanders, Belgium.

Brownish head and foam fading quickly. Smell and taste incredible, cherry and grape, very smooth and easy to sip on it, I wouldn't get tired of this.

Sadly difficult to find here, but it's a solid recommendation.

This was poured into a snifter. The appearance was a nice looking hazy amber to orange to brown/Red color with a slim half finger-ed white foamy head that dissipated within about a light thirty seconds. The smell had a nice sweet to sour fruit leaning towards an apple/possibly peach and maybe somewhat light cherry. The taste took those flavors and combined wonderfully to taste. A nice sweet fruity to somewhat sour aftertaste accompanies the flavor. On the palate, this one sat about a light to medium on the body with a fairly decent sessionability about it. The carbonation was there and good for the style and for me - as it’s nothing overbearing. Overall, I’d say that this is one I’d have again. Great beer!

Pours an old, brown color, not unlike filthy pond water, with a negligible cap of khaki froth the soon retreats into tasteful ring around the periphery. Mild aroma smells of apple cider vinegar and tart cherries with some brown sugar and a vague, muted spice akin to stale allspice.

The taste is mellower than the nose would suggest, and extremely cohesive. Everything blends together so nicely that it is an entity unto itself, with little in the way of untoward prominences or evolution. Close scrutiny reveals apples, oak, bready malt, spicy yeast, and a tasteful dash of apple cider vinegar. Grain husk peaks out on the back end. Moderate carbonation and medium body afford a smooth, lively mouthfeel.

Overall, this is a subtle, classy brew with no serious flaws. The taste, while not bold or complex, is simply well-executed and delivers on the style in a way that would ingratiate itself even to novices.

You can smell the cherry as you place the glass up under your nose and the subtle sweetness balances well with a tartness. I can't grasp it as well going down, but the cherry definitely lingers slightly.

Please note my review is based on a bottle that I just purchased that unfortunately was "sell by" 6 months ago. Smelled and tasted pretty much like viniger. Don't age this beer. Drink fresh.

Poured a clear ruby color with a light pink head of fizzy foam. It smelled of sweet cherries and a little bready notes. Nice sour bite up front with a strong cherry flavor. Crisp and puckering mouthfeel.

Pours a red brwon colour, with a small head that fades soon, leaving a good lace. Aroma is sour, oak, berries, Medium to light body, carbonation is good, Surprisingly, taste is not as sour as the smell indicates, cherries, vanilla, fruits, all come in good for a round bitersweet taste. Refreshing and easydrinking,

Overall - I really like this beer, the taste and smell is great.