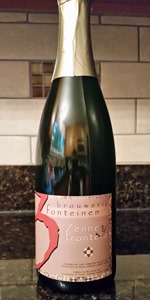 Notes: 3 Fonteinen Zenne y Frontera is the latest creation of Armand Debelder, together with sommelier Andy De Brouwer of Les Eleveurs. The lambic was aged in 40-year old casks for 12 months prior to bottling. According to the brewery, this collaboration seeks to bridge the beer and wine worlds and is also aimed at drawing in the culinary sector.
View: More Beers
Recent ratings and reviews. | Log in to view more ratings + sorting options.
Rated: 4.75 by Skellbop from New York

S: Aroma is tart lactic acidity, a big minerality, some plastic like funk notes, only the faintest barnyard characters. Mild sherry notes give it a subtle fruitiness. A bit of spice on the finish like white pepper. 4.75

T: Taste is immediately wildly complex. There’s a sweetness up front followed by a sour tart punch, then lingering oaky vanilla on the finish that lasts forever. It’s not as aggressively tart as some lambics/gueuzes, likely subdued by the cask asking. Other characters I get are red grapes, tart citrus, moderate spice. Just fantastic, so much going on, and the finish is divine. 5

M/D: Mouthfeel is medium bodied. Carbonation lower than most in the style but insanely drinkable. 4.25

Review 1200!!! For this landmark review, I'm tackling the highest rated Traditional Lambic on BA, which also happens to be the 10th highest rated beer overall on the site. This one has been a huge want for me for quite some time now, so I'm happy I managed to source a bottle. I will drink half of this immediately and decant the other half for about 20 minutes, as suggest by 3F and others who have reviewed to see the difference. I will take the highest of the 2 for the official rating, but I'm sure that will be the decanted version. Let's pop it open

Pours a cloudy deep orange with just a thin ring of bubbles which obviously leaves no lacing. Expected for the style, and I don't think decanting will make a difference in this regard

The first whiff of this tells me that decanting is probably the move, as it feels like it needs to open up a bit first. Pre-decant, I'm picking up on aromas of peat smoke, leather, oxidized sherry, wet hay, and white wine vinegar. Post-decant, I'm picking up on aromas of lemon juice, tart peach, white peppercorn, oxidized sherry, wet hay, wheat cracker, toasted oak, light smoke, and stone

Much like the appearance, I don't think decanting will have any effect on the mouthfeel. A medium body pairs with gentle carbonation, resulting in a sharp and funky beer. Finishes bone dry with a hefty funk. This is so damn refreshing that I could literally chug it, but obviously I wouldn't do that

Wow, this is truly awesome stuff. I mean, I can't say I'm surprised, I knew what I was getting into, but it was an absolute honor. Paired wonderfully with a smoked bleu cheese and fig pecan crackers. I couldn't think of a better beer for 1200. Cheers BA!

Pours a beautiful gold color with a light haziness to the transparency. Head is two fingers of white foam. Aroma is sherry and barrel right off the cusp. Funky stone, lemon, and earthy notes round it out with a light funky nose. Sherry smooths things out, elevating the whole nose from base, while delivering stronger, more potent notes of dried fruit. Flavor profile builds on the nose, hitting sherry and barrel character first. Stone, lemon, tangy green apple, and earthy notes round it out - again. There is a sublime twist of funky tartness that does well to give the whole flavor profile an additional dimension. Mouth feel is medium in thickness. Texture is driven by a consistent, smooth, even texture. Overall, just a splendid beer, in each terms of complexity, quaffability, and thoughtfulness. Lovely.

4.25/5  rDev -9.8%
look: 4.25 | smell: 4.25 | taste: 4.25 | feel: 4.25 | overall: 4.25
Bottle: Poured a dark golden color lambic with a medium size foamy head. Aroma of funky ester with some barnyard notes and some woody vinous notes. Taste is also a mix of vinous notes with some funky barnyard notes and oak notes. Body is about average with good carbonation. Great lambic but was expecting the Pedro Ximinez barrel to be more apparent.
Dec 21, 2021
Rated: 4.02 by wisrarebeer from Wisconsin

Reviewed by dboon from Florida

Reviewed by brokensail from California