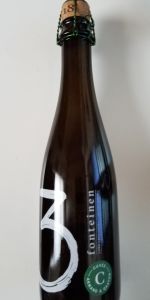 Notes: 3 Fonteinen Oude Geuze Cuvée Armand & Gaston is a blend of one-, two-, and three-year old traditional lambics, all brewed at Brouwerij 3 Fonteinen. Spontaneous fermentation, patient maturation in oak barrels, and continued evolution in the bottle result in a distinctively complex beer. No two bottlings are alike, as there are multiple variables in the blending process, a variety of barrel sizes and shapes, differences in aged lambic proportions, etc. This cuvée, like all of our lambic, is 100% natural, authentic, spontaneously fermented, and crafted with steadfast adherence to tradition, like Armand and Gaston Debelder have always done it. This geuze has fermented in the bottle and will continue to develop its tastes and aromas over its long life when properly cellared. Traditional Lambic is living, cultural heritage rooted in the Zenne valley! Taste, savour, enjoy, and experience this unfiltered, unpasteurised, and unadulterated beer with friends new and old!
View: More Beers
Recent ratings and reviews. | Log in to view more ratings + sorting options.

Reviewed by txaudiophile from Texas

Reviewed by augustgarage from California

Hard to find a more authentic example of the style - rich, complex, rustic yet refined. Reasonable value given the time and labor involved. A good candidate for aging indefinitely.

4.75/5  rDev +5.6%
look: 4.5 | smell: 5 | taste: 4.75 | feel: 4.25 | overall: 4.75
Pours a rich, light orange with ample visible carbonation and a light collar of foam. Nose is extremely funky and expressive with elements of dried and wet hay, fresh cut crash, menthol, wood chips, pine, and sap. The aroma continually evolves and builds on itself throughout the course of the drink. Taste follows with an equal complexity and expresses many of those notes from the nose. There's a deep earthiness that underlies it as well, evocative at one moment of the smells of a forest floor or the flavor of a cave aged cheese the next. Overall, this beer does not stop working until it's gone. Remarkable and easily one of the best.
Sep 25, 2022
Rated: 4.5 by d5001986 from Wisconsin

4.5/5  rDev 0%
look: 4.5 | smell: 4.5 | taste: 4.5 | feel: 4.5 | overall: 4.5
750ml bottle, caged and corked. Label has bottling date as '21 SEP 18', and a best before date of '26 OCT 38'.
Clear, medium gold colored body. One finger of white head sticks around as rising bubbles replenish. Slight strings of lacing.
Aroma is a complexity of funk, fruit and oak. The funk is musty and hay-like, the fruit is remindful of green apples, and the oak adds to both the slight sweetness and the tannins.
Taste is also complex, and sour in tone. The mustiness comes through in the funk notes, and the fruit has green apples that add to the sour tone. Big oak underlay. Rather quick to disperse and dry. The fruit funk lingers.
Mouth feel is light and substantial at the same time. Bubbly, and high in carbonation.
Excellent balance in its blending, and a pleasure to sip.

Reviewed by twage04 from North Carolina

Pours a honeyed golden orange. No real head to speak of, but a nice white ring surrounds the glass.

Complex nose that you need to smell yourself to truly experience it. Fruit notes of green apples, pears. Funky notes of general barnyard stuff, hay, some musty notes in there as well. Somewhat of a vinous smell, generic dark wine grapes here. Some wooden and oaky aromas. The smell is not an unrestrained Brett/super barnyard funk that smells like a horses barn that hasn’t been cleaned and smells like crap, and it’s not sour vinegar-y either. It’s even mildly sweet.

Taste of apricots on the sip that morph into a green apple flavour. Some dried lemon and tangerine peel notes here, I think it’s the drying effect on your palate that give me that impression. Ever spritz a citrus peel and lick the peel itself? That kind of oily flavour is here, but it’s miles more gentle. A little bit of wheaty notes here as well, like some damp, whole wheat bread made with sprouted grains or something. Vinous character at times, like generic white wine grapes. It sort of dances between a lot of different flavours, and yet all of them meld together on each sip. It’s more like, on a particular sip a certain dancer does their solo before blending back in. It’s pretty remarkable all things considered. Some gentle leather like flavours that are sometimes accompanied by… a mild smoke flavour? I might just be shooting blanks here, but it feels like it. There is not, well… I don’t think it’s a savoury character to this. But there is this kind of umami flavour to it. Sort of like the character of blue cheese or yogurt, that sort of body. It’s not oily, particularly, because the sourness makes it more tart than anything. It’s really hard to nail down this character, especially as it warms and it comes out even more. Thankfully… I have another in the cellar!

Definitely sour, but not a puckering sour. There is even a mild sweetness. It finishes pretty dry, and surprisingly, finishes quite clean as well. No lingering sourness on the palate. Maybe some very mild fruits and the slightest hint of sweetness, which is really unique from a lot of sour beers I’ve tried. Good carbonation that creates a smooth sip, the carbonation is not particularly biting. Medium bodied.

This is my first real Geuze. I’ve had plenty of sours, but not a Geuze as of yet. And I’ve had plenty of terrible farmyard funky sour vinegar bombs that taste like they added 10 gallons of brettanomyces. This is not that. This is balanced, restrained and yet complex. For what the style is, it feels like an absolute benchmark. I am by no means an expert in this arena, but this is quite an experience for any beer drinker. My bottle was bottled early 2018. Which made this about 4 years old when I drank it. I have a second one I plan to age for another 4 years or so! Can’t wait to revisit it! To tide me over until then, I have many other 3 Fonteinen beers to try… the framboise may be next!

4.49/5  rDev -0.2%
look: 4.25 | smell: 4.5 | taste: 4.5 | feel: 4.5 | overall: 4.5
Pours a foggy, hazy burnt orange with a half finger of white fizzy foam. Head bubbles away quickly. Aroma is peach and apricot for fleshy fruits, but not overly juicy. It adds just a touch of initial sweetness. Stone, grass, and oak round it out. It has a slight tart funk to it, but is not 'sour'. Acidity remains balanced, and low. Flavor profile is stone, oak, grass, herbal, peach and faint apricot. It leads with that heavy stone, grassy, yeasty character, with a little build up of fruits at the finish. Tartness remains light or faint, offering just a touch of dynamic at the end. Acidity is low. Mouth feel is still in effervescence with just a little sparse pulp for any additional texture. Thickness is medium. Overall, a sublime lambic that packs elegance into every sip. It's not big, bold, or brash, instead developing an endearing personality.

A slow pour yielded a small white head; no lace.

Elegant, balanced & tasty. I'd have another!!

A: pours a deep burnt orange with a couple fingers of frothy tan head that faded away into a thin bubbly collar with soapy lace.
S: musty earth/wood, bright acidity, mild citrus, wood, grain, and apple notes.
T: follows the nose with musty/damp flavors and soft citrus, with the addition of darker grain/dark bread flavors. I get a touch of dark fruit followed by a cider-like note in the finish and apple skins in the aftertaste. There’s a earthy spice throughout along with a lingering funk to the aftertaste.
M: frothy, creamy carbonation complimented by acidity that is sharp but quick. Medium body with a little chew to it. Not bone dry or thin. Acidity lingers but this drinks well. But if you want a few of the last sharp corners rounded off, give this a few more years of age. This is still pretty bright for 5 years.
O: I had to pop a bottle on the day of Armand’s passing and felt this was a good fit. A lovely beer, just like the lovely man I hear Armand was. Fuck cancer; rest in piece.

4.57/5  rDev +1.6%
look: 4 | smell: 4.5 | taste: 4.75 | feel: 4.5 | overall: 4.5
Pours a cloudy opaque brownish tinged orange color. Very thin, fleeting off-white head appears as the beer is poured, but dissipates almost instantly. The aroma on this is very complex - there is a moderate funkiness on the nose that is immediately noticeable. Notes of tart green apple, white grapes, oak, dirty laundry, and a zippy lemon character.

The taste leans into the funk without as much of the tartness. There are notes of green apples, apple, lemon, some bleu cheese notes, strong oak with some mellow white grapes, wet blanket funkiness and some dry tannic notes. I feel like I get something else every time I take a drink of this beer. At times its funkier, and times it more fruity and tart, then it is drier and leans into that chardonnay like character. The complexity of this is amazingly balanced by a drinkability I have rarely found in these geuzes. I could actually envision drinking this all afternoon rather than just a single glass - although my heartburn would undoubtedly make me regret that. Still, this is a beautiful beer - complex, yet approachable.

The feel is medium bodied with bright, vibrant carbonation. The tartness in this dances up to the point of being puckering without ever actually reaching that point. It is definitely a drier beer especially on the back end into the finish.

Overall its a remarkable beer - delicious, complex, challenging, yet oddly drinkable. A fitting beer to carry the name of Armand Debelder

T- fruity notes of ripe pears, green apples, lemon pith and citrus zest up front, followed by a backbone of funk, providing notes of hay, lemon tartness, yogurt and some barnyard funk. The finish is fruity and funky, with notes of more pear and lemon, funky linger

M- light-medium body with low carbonation leads to a foamy mouthfeel that finishes foamy and dry, just enough tartness lingering on the mouth