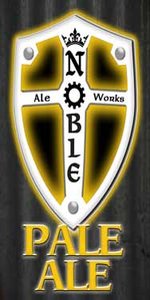 Had a pint of this at my boi little Nicky's 30th at some podunk bar in Fullerton, CA.

So there Raul was: one girl on each side. On the right was one of little Nicky's sisters l, and on the left was this lil minx that kept on grabbing Raul's arm and flirting with him as her boyfriend sat near. (Raul don't play games like that, my peeps. Don't do it!)

Anyway, to defuse the situation, Raulsky ordered the only beer that seemed palatable - and drinkable it was. Not the crispest, not the most robust, not the most flavorful, and not the most balanced; but at the end of the day, when you got your homies sister on one side and a sneaky little fox - whose next move is unpredictable - on the other, a Noble Pale Ale is mighty fine to level the mood.

On tap at Noble Ale Works in Anaheim, CA.

Billed at the tap room as Breakaway Pale Ale with the same ABV, so I will assume it's the same beer.

Pours a hazy orange with a foamy beige head that settles to wisps of film on top of the beer. Small streaks of lace form around the glass on the drink down. Smell is of malt, citrus fruit, and citrus zest. Taste is much the same with a citrus zest flavor on the finish. There is a medium amount of hop bitterness on the palate with each sip. This beer has a lower level of carbonation with a slightly crisp and medium bodied mouthfeel. Overall, this is a pretty good beer with a great smell but the taste doesn't match up in my opinion.

Poured from a 12oz bottle into a pint glass.

S- WOW. More on the IPA side, hoppy, floral, some light malt. Very intriguing on the nose for the style!

T- Wow again! Hoppy, little bit of citrus, sweet malt balance and again a nice hop bite in the end. Not typical for the style, but it has a great drinkability.

MF- Smooth, light-medium body, light-medium carbonation, crisp and leaves a great finish that hangs around with a subtle bitterness.

O- Still impressed by this brewery, great stuff, must try! I am definitely looking forward to more!!!

They call this one "Breakaway Pale Ale," but it's the same ABV as what's reviewed here. Great aroma of orange blossoms. A hoppy sort of Pale Ale but a very flowery and friendly version.

Golden amber in the pint glass. Decent cap of foam. Sharp and lightly spritzy on the tongue. Some resins as you sip. Really drinkable, and an excellent example of the APA style. Loads of hop aroma and flavor with a quaffable level of bitterness.

Drank this on tap at Beachwood Barbecue in Seal Beach.

A pretty bold but still very manageable, just a fun lovin' pale ale. Balanced but still a bit agressive upfront. I could have just said delicious as well.

taste- malt flavor then hop bite, out of balance for the style

overall- not of the english pale ale style, way over-hopped
This is an IPA and not of any english pedigree. English beers have fine balance.

Starts out mildly sweet with a toffee and wood flavor. Mild flavor with a medium level of bitterness. Not a lot of subtle flavors here just a straightforward APA.

Drinkability is good. An OK BPA but not a great one.

Poured from a bomber into a shaker pint glass.

A: Clear, light amber color with one finger of off-white foam head. Light lacing remains on the glass. Tight formations of bubbles rise eagerly in the column. A drift of fine sediment can be seen at the bottom of the glass.

S: Toffee dominates the smell when this beer is at its coldest, featuring a cloying and musty earthiness that is forgivable. As it warms, orange citrus becomes more intense, eventually surpassing the toffee. Esters round out the smell, accentuating the juiciness of the orange fruit.

T: Begins off-dry, with chemical-laced caramel malt that invites persistent astringency early. Hops display subtlety in their mostly earth and savory spice profile, while surging acidity peaks into the middle. Flavors turn sweeter and more mild, featuring faint orange amidst increasing toast that combine to make for the most refined portion of the taste. The finish is moderately bitter and slightly sweet with earthy caramel that even allows for a whiff of roastiness the be detected. Resurgent astringency detracts from other flavor qualities.

M: Medium viscosity, acidity and astringency are both felt on the palate to the point of distraction, with low carbonation.

D: This new Orange County start-up brewery makes some strange tasting beers. Having tried their Alpha Red, IPA, and now this pale ale, I can report that each deals some unexpected twists but the Alpha Red may conform most closely to expectations. Of the three, the Alpha Red was the only not served from the bottle, so maybe the issue is not so much with the beer but with the bottling process.

The pale ale is a very full-flavored rendition of the style and those flavors are all over the map. There is not a concentration of West Coast hop character, however, with malt, darker aromatics, and some obvious astringency issues making up the bulk of this beer's flavor qualities.

A: The pour is sort of orange in color with a finger of white head and some spots of lacing.

S: This doesn't smell much like an English Pale Ale. Lots of citrus hops, particularly orange and grapefruit. There's a decent pine quality to it as well. I guess the prominent bread malt character is what makes this "English".

T: A big hop bitterness to the beer, mostly in the form of pine and grapefruit peels. There's a mild grassiness to this beer along with plenty of bread and slightly sweet malt flavors.

M: The body is medium and the carbonation is as well. A slight bitterness lingers on the finish.

D: This is pretty easy to drink, like you would want for a pale ale. Not the best out there, but a pretty decent beer.

22 oz. bomber, looks like the new brewery is a stone's throw from Angel Stadium,

A: Pours a dark amber with a soft finger of white head into an imperial pint glass. Good lace, definitely on the dark side for this style.

T: Considerable malt flavour, caramel/treacle, toffee. Hopping is fairly light, good amount of grass and earth on the back end to keep it interesting. I liked the balance. Hint of metal on the finish. The sweetness certaintly tries to take over, but the hops always hold it back. The overall flavour is very English.

D: It's still a bit tought to find information on this brewery. They're in Anaheim, just off the 57 at Katella, but that's about all I know. Found some bottles at Farmer's Harvest and I want to support any new Orange County brewers so I picked this up. I entered it as an English Pale Ale simply because of my impression of the beer, the look, the smells, the taste, feel free to correct me. Overall I found this a solid first impression. The beer is well made, balanced, good flavours. I'd love to see this on cask. Looking forward to the IPA.

Noble Pale Ale from Noble Ale Works
Beer rating: 85 out of 100 with 25 ratings