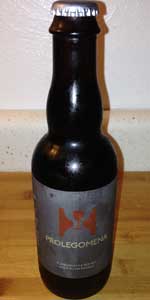 Acquired: Via a trade orchestrated by a friend in my tasting group; thanks, Collins!

Reviewed live at low altitude in Austin, TX. Side-poured with standard vigor as no carbonation issues are anticipated.

Vintage: ?
ABV: 8.5%
Style: Flanders red ale (per the label).
Serving temp: Cold. Allowed to warm over the course of consumption.
Serving vessel: Tulip.
Expectations: Sky-high given the style and brewery. I believe this is my first Hill Farmstead sour, and this style might be my favourite type of sour.

BODY: Oddly, it looks like more of a caramel-brown than a deep red to me. No yeasty muck is visible.

It's a nice-looking beer in general, but doesn't nail the flanders red appearance at all.

AROMA: Has a nice tartness, with notes of tart cherry and cherry pie filling. I dig the pie crust. It's not as acetic as say, Rodenbach's best offerings, but it's adequate. Faint cream.

The barrel character is understated, subtly teasing out the mild sourness with hints of oak, and to a lesser extent, red wine.

I think I'm finding some fresh orchard red apple as well. Granny smith apple? It's crisp and inviting. Maybe a kiss of brown sugar in there too?

The cherry pie crust is seductive, and the tartness right on the money for the style. Seems only modestly sour - maybe 3-4/10 in terms of intensity. In any case, this is mouthwatering and near perfect for the style. Brilliant.

No yeast character, alcohol, or off-notes are detectable.

TASTE: The red apple is a nice touch, blending well with the cherry pie filling I love so much about this beer. The pie crust notes are set off beautifully by the hint of brown sugar - another note you don't find in many traditional offerings in the style. Not quite as acetic as I'd like, but it's there.

Contrary to the best traditional offerings in the style, it has a younger more crisp taste instead of an obviously aged expression of flavour - which probably contributes to the understateness of its acetic character as well as the absence of much in terms of vinegary flavour.

Sourness is a style-appropriate 3-4/10, but I'd like to see it dialed up a bit along with the tartness.

This build nails the fundamentals, hitting the cherry pie and acetic one-two punch of a great Flanders red beautifully. Its balance is stellar, and there's ample subtlety and here. What's impressive is its unique nuances, particularly in terms of the expressive brown sugar and apple.

Very cohesive. Certainly a gestalt beer, with plenty to offer the discerning drinker.

Constructively, the oak barrel is rather reticent. Still, the red wine lends this a nice subtle undertone of dry blackberry and a kiss of tannins.

TEXTURE: It's a bit thin on the palate, with inadequate body and presence. Needs a fuller body, a softer feel, and more of a refreshing smoothness and wetness. But it's near perfectly carbonated. Perfect acidity, coaxing out those crisp red apple notes and evoking apple skin.

There's not a harmony of texture to taste, but it complements it nicely.

OVERALL: One of the best American-brewed Flanders Red Ales I've had. Its uniqueness will impress the discerning drinker, and it's absolutely worth trying. This is more great work from Hill Farmstead, but it still fails to surpass the traditional paragons of the style (e.g. Rodenbach Caractere Rouge). I could drink this by the growler, and already want more.

Acidic aroma of tart cherry preserves and red wine with a touch of caramel in the background. The flavor is milder, with a rounder acidity than the aroma would imply with the same dark sugar and fruit notes as in the nose. Like that acidity, the sweetness is a bit less pronounced than in some examples of the style and it balances nicely. Complex, balanced, and subtle this is perhaps the first HF beer that I have had that fully lives up to their substantial reputation, and it is one of the best beers I have had in quite a while.