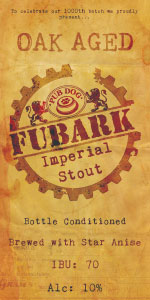 2013 bottling. 375ml poured into a teku. The brew apoears black in color with a rich mocha head that fades leaving a full wall of webby lace.

This is medium in body with modest carbonation. Creamy rich and pleasantly smooth with no alcohol impact. Not a bad brew but not something I feel I need to drink again.

This is a nice imperial...Motor oil-coffee presentation in the glass, with nice head retention and lacing. Great sweetness and easy drinking balance, with the alcohol being amazingly well buried in the mix for a pour that comes in at 10% ABV. (It does of course kick after the fact!) There is a fairly prominent coffee bitterness in the finish that does lingers on the pallet. (Note: Coffee is of course a major component of this batch and it's great to drink a beer that actually includes the flavors the brewer advertises! (Kudos Pub Dog.) Some may not like the prominence of the coffee, but the syrupy upfront sweetness is a great foil-counterbalance.

This is the 2014 version. Nice 2 finger head. Pours dark black like used motor oil. Great aroma of coffee and oak. The oak really comes through in the taste but not over powering just right. Good coffee flavor with a slightly bitter finish. This is one great Maryland beer.

Pours down with a thick caramel head. Pitch dark color. Aroma has a hint of dark chocolate and nuts. Alcohol is well blended in the flavor which tastes like dark chocolate, walnuts and smoke. Creamy texture that finishes with a long lasting smoky finish.

Brief write-up of the 2014 vintage. This time, it's brewed with coffee - awesome! While this presence is subtle, it works with the base beer better than star anise did last year (well, two years ago...) The coffee might be slightly too subdued, in fact - that isn't terribly surprising given its age. And I still get a bit too much licorice for my preference. The taste is similar to the nose, with subdued coffee in general. The primary note is still licorice, with lesser hints of vanilla and chocolate. Actually, come to think of it...I get very little coffee, and very little oak. I do have to laud the mouthfeel: it's not too light, fairly creamy, yet dry and easy to drink. Yeah, I'm still not particularly impressed by this one. Ah well.

A: Pours an extremely dark ruby color. The head is about one fingers high, with a khaki shade. Retention isn't very good, neither is the lacing.

S: The main addition (anise) immediately takes the aromatic forefront. Some spicy oak tones come through behind that, with a hint of dark fruits further behind that. And there's even something suggesting a mild hoppiness. Overall, the anise portion is rather overdone - then again, considering how I don't like (overdone) licorice/anise in my beer, this is to be expected. Still, I don't hate the aroma, so some hope about a decent flavor is preserved.

T: Boom. Anise hits the palate immediately. There's an oaky note on the back end, but this is mostly an anise bomb. Remember earlier how I said I don't really like anise? Still, it does bring some complex notes - coffee, mint, chocolate, and the like. I'll give it a 3 because it is well made (if imbalanced): scoring subjectively, it would probably be a 2.5 or something.

M: I really enjoy its mouthfeel. Sure, it's a bit thin, but it's relatively crisp and dry without being harsh. In that regard, it drinks quite well. A sweet oiliness is left behind on the palate which serves to quash its dryness. It's not very tannic or carbonated.

O: Your enjoyment is going to be decided on whether you like anise in your imperial stouts. I don't, so this is pretty middling for me. The whole idea of this beer interests me - I'd love to see next year's batch use something like chocolate, coffee, or hell, even coconut.

Fubark Imperial Stout is planned to be a once yearly brew with a yearly variation in taste.
2013
This is batch 1000
70 IBU
Aged on Oak and spiced with Anise.
375 ml bottle

A - aggressive pour into 22 ounce glass yields a straight black brew with a short head that fades very quickly but leaves lacing.
S - anise in the aroma, dark malts, but I don't detect much wood. I'll let some warm and look for the wood later.
T - simple straight forward bittered stout with flavor additions of anise and some trace of wood resin. Not too complex but also not harsh.
M - smooth but light bodied and undercarbed from what I expect an imperial stout to be.
O - easily drinkable but not remarkable

Drop the price a bit and this would be something I'd pick up on a yearly basis to see what different flavor additions do to the base beer.