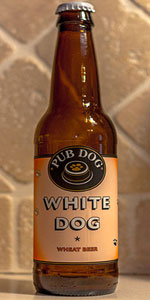 This is a very good beer. To me, the flavor profile was closer to that of a white IPA. Good head retention, very pale in color. Aroma has a nice hop bouquet and flavor is hoppy with little malt character and a not overly bitter, crisp finish. Good refreshing summer brew.

Brief write-up. This is a style that's very hard to stand out in: it's usually just wheat, orange peel, esters, and coriander - that's it. Even for the style, it has a mild nose consisting of those 4 elements, but at least it seems well attenuated. Flavor-wise, there are no shocks, though it is slightly heavy on vanilla cream flavors. A wit's hallmark isn't flavor intensity - it's drinkability and delicacy. This pulls off the former with a crisp, dry finish; it doesn't have the flawless flavor cohesion to put it in the latter, though. It's not Allagash White, and I likely won't buy it again; but it gets the job done decently enough. I'd never refuse a free one.