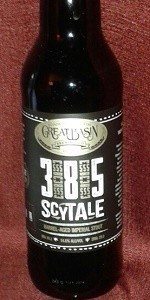 This pours black, motor oil black. No head except a weak attempt to carb/bubble up. Lacing is present, it is after all almost 15%. Aroma is cherries, dark fruit, bourbon. Quite liquor-y, with a bit of pipe tobacco. Super-rich.

Taste is bourbon, wood coming on strong, malts, brown sugar, some coffee, leather, rummy fudge. Some char and smoke in the back end. It's a mouthful, but it's really more mellow than I'd first think -- 14% is there but feels little more than 12 or so. Like that's nothing. A little sweet and thinner than comparable big RIS.

This aged a full year before release, then in my closet for another. Imagine it would have been more astringent a year ago. Wood whisky is the total takeaway. Pretty boozy, sticky, syrupy, caramelly.

Really liked this. Not quite as good as the 404 in my opinion, but still a keeper. Probably needed a little more time in the old cupboard. (Overall - 4.25)

A- pours jet black color with no head at all, looks like a port, some alcohol legs running down the glass

T- plenty of barrel up front with a kick of bourbon, giving off notes of vanilla, melted caramel & burnt brown sugar. Mid-palate brings a molasses & black licorice-like sweetness with cocoa, fig & date. The finish gives more bourbon, with some booze and dark fruit on the linger

O- a great straight up barrel aged stout that brings out an abundance of flavors, without adding adjuncts. Only downside is that them mouthfeel is a bit thin, which makes it hard for the 14% abv to hide

So I guess the continuing change in these names be the number of days this stuff spent in a barrel. This one pours black. Good carbonation on point, tan head 3/4". Aroma of bourbon, oak, roast. Simple enough.

Taste, good thickness, roast still comes through, alcohol heat but not oppressive. Thankfully covers up dark fruit bitterness than can be distracting in a RIS base beer. Its cool you can find these as cheap as $15 at winco, $20 at liquor stores.

Of course they just jacked the 808 price up to $28. Angel's share and whatnot explanation I'm sure.

This is a great example of how every region makes a good bourbon barrel stout nowadays. Makes no sense to chase shit when plenty serviceable stuff like this, Parabola, Pugachev's etc. . . is on the shelf.

Saw this beer at Lee's a few times, calling my name, but each time after seeing the $19.99 price tag I passed it up. I miss a good barrel aged stout in the summertime when Bourbon County is long away cellared, Parabola's grabbed up in a single week if you can get to it, and Pugachev's cobra are done sitting on the shelf's. After seeing it was only brewed once and having a few excellent reviews I'd figure what the hell. Even though I love the style , I've had more average barrel aged offerings than good, so I'm careful these days, going in skeptical.

L. Very nice midnight black, as I'd expect out of a stout. Swirling the glass does reveals lacing similar to bourbon county.

T, Chocolate, Vanilla, Toasted Coconut, Oak, and more Chocolate. It does have a very nice chewie brownie vibe going for it -Below all that I'm getting some very nice dark fruits. Extremely Well balanced, and a world class tasting brew.

F. Thick - exactly how a barrel aged stout should be.

I was pleasantly surprised at this brew. The more I'm sipping on this beer, the more I'm thinking it beats parabola - Mostly in the mouth-feel. (I always thought parabola was an excellent brew, but a bit thin), but this beer does not beat bourbon county. BCBS is still the golden standard IMO (When it's not infected :) ) Although I've been wishing I could get to try Fundamental Observation Barrel Aged Imperial Stout, I currently can't justify paying $150.00 for a single beer. So I do not know how that compares to BCBS

With that being said, I guess only downside and reality is these days you need to spend $19.99 on almost every barrel aged brew available in stores. This, along with parabola, and pugachev, all retail at $19.99. BCBS is less $, but less brew for the $. I guess barrel aging programs are expensive :)

Appearance - Pours dark, near black, with cola brown edging where light can penetrate. Cocoa powder colored, half-finger head that dissipates rather quickly, leaving a mostly barren surface and a thin ring of suds around the edge of the glass. No lacing, but none expected.

Smell - Strong aroma, with notes of chocolate, nuttiness, caramel, vanilla, oak, molasses and a bit of heat from the whiskey to deliver quite an enticing aromatic experience.

Taste - Follows the nose. Fudgy chocolate and a bit of nutty flavor upfront. Caramel and oak make up the undertone with accompanying vanilla sweetness. Roasty malts. Molasses and raisin notes come through in the finish and linger with the fudginess and a bit of heat from the booze.

Mouthfeel - Full-bodied with low to moderate carbonation. Slick texture lends to its easy drinking, then a dry finish that leaves the lips feeling a bit sticky.

Overall - A formidable BA Impy, rivaling the likes of a Parabola or Big Bad Baptist. A little hot, but nothing unexpected for a beer of this magnitude, and one that should age beautifully. Makes me wish I'd have grabbed another bottle for that very purpose. I look forward to future releases of Scytale.

Smell: pleasantly boozy notes of whiskey is undeniable vanilla hints as well as molasses hits strong as you swirl it a go in a snifter.

Taste: crazy sweet Flavors are everywhere this is one of the better ba stouts I've ever had!!!
Chocolate, molasses, fruity , and honey! The heavy alc. Content balance out this sweet mellow charred smokey ba stout just right!!!!


Overall: a round of applause for this ba stout by Great Basin 385 scytale is definitely a must try there 385 day barrel aged process is a grand slam I put it up there with Westbrook, bottle logics ,cigar city ba stouts!

Great dessert beer. One of the best barrel aged imp stouts I've had. The whiskey barrel adds some amazing character to it. Lot of sweet notes: molasses, honey, dark fruit, chocolate, caramel. Might have to grab a few more bottles of this to age.

This beer is definitely one for the cellar!
Looks of deep dark molasses night accompanied by strong notes of drenched whiskey and sweet honey arouse the senses. Flavores of charred oak barrels roasted chocolate deep dark whiskey, molasses semisweet chocolate, vanilla, and dark stone fruits arrive upon subsequent sips, and as you delve into the unending subtly of licorice, honey, and allspice, you’re left with smooth caramel that saunters on the palate.
Feel of silk lingers with a bit of a cream feeling. Overall this is a amazing beer.