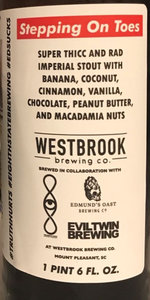 A - Poured into a Kate the Great tulip a nice dark brown almost black with a thin mocha head that fades to leave light wisps, lovely legs, very oily.

S - Big aromas of sweeter bananas and tons of peanuts. As it warms the peanuts become even more and more assertive. No coconut, no vanilla, no cinnamon.

T - Taste is similar to the nose with tons of banana and peanut butter. Like a peanut butter cup banana milkshake. Big coconut, nice vanilla. Really thick and dense.

O - Overall this was a very enjoyable stout, huge banana and nuttiness, just wish the rest lived up to how well those two aromas and flavours delivered.

Nose brings loads of peanuts and banana, some general nutty notes and some macadamia nuts, loads of nuts, turning to almost peanutbutter, no cinnamon, no coconut, hint of vanilla, very mild cocoa

Taste more loads of peanutbutter and banana, some dark chocolate as well, like a candy I made as a kid, banana covered in peanuts and chocolate, resee's peanutbutter cup with banana, mild candied macadamia nut, hint of cinnamon and coconut, fair amount of candy bar, some alcohol but not heavy, fair bitterness, rich dark malt and roast

Overall decent, loads of nuts and banana, not much else on the nose, although the taste had some limited notes


Stepping On Toes from Westbrook Brewing Co.
Beer rating: 4.33 out of 5 with 3 ratings