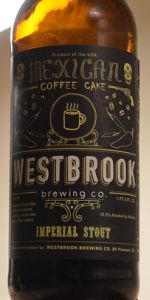 Notes: Way back in December 2011, we brewed our first anniversary beer – a serious imperial stout aged on cocoa nibs, vanilla beans, cinnamon sticks, and fresh habanero peppers. It was so delicious we decided to infuse this version with coffee and bring it back once each year.
View: More Beers | Place Reviews
Recent ratings and reviews. | Log in to view more ratings + sorting options.
4.74 by MJSFS from Florida on Sep 05, 2021

Acquired in a subscription box from Tavour

Nose: 5 - holy crap! Look, I don't love the mole style, but this smells amazing. The coffee and spice complement each other perfectly to create this lovely sweetness.

Taste: 4 - pretty tasty, but honestly a bit underwhelming. No explosion of flavor here. It's almost crushable.

Mouth: 4 - interesting. Thin on the tongue, but thick down the throat. Again, crushable.

Overall: 4 - honestly not as impressive as the OG Cake, but I like it more.

Westbrook has been on the radar for all of 2020. I was finally able to find their Mexican Coffee Cake Stout on Tavour. The beer is heavy coffee for the initial few sips. As it warms up, the chocolate cake profile starts to break through and rounds out. I would recommend drinking this one about 10 minutes out of the fridge.

Void of the depths black with a finger of brown foam. Smell is dominated by the coffee with dark chocolate and cinnamon accenting. Taste has much more depth: dark roast coffee, dark cocoa and hot chocolate (so brighter) with mild pepper heat, strong cinnamon, a touch of vanilla and earth. Feel is warm yet not overly taxing, chewy, and decently smooth despite spice textures, very well made. Not as good as the orignal, but for coffee fanatics you might disagree.

Bottled 7/7/20. I can see why this one is rated so highly. Anytime I see a beer with peppers, I worry that it is going to be too spicy. But this one is just right. It brings heat and flavor, but it is not too much. There is also plenty of cinnamon, coffee, vanilla, and chocolate flavor. Extremely well balanced, big bodied, very boozy, but it doesn’t have an oiliness, thickness, or stickiness to it. Excellent beer.

Poured from 22oz bomber into my BeerAdvocate teku. Bottled 7/7/20.

Smell: roasty and sweet with just a hint of coffee. There's also wonderful dark, rich notes of toffee and dates. Really quite delightful.

Taste: very sweet, with plenty of vanilla flavor; there's a bit of roastiness and the coffee comes through, though like the aroma it is subtle. There's less of the dark fruit and toffee in the flavor than in the aroma, which is a pity because I really like that stuff. This is still a very good pastry stout, but maybe not quite up to what the aroma promised.

Overall: this beer is a delicious, if rather sweet, treat. Perhaps not sublime, but very good indeed.

Black. Of the mass of ingredients, it is chocolate & chilis that escape the surface & just a touch of roast.

Mexican Cake – Coffee is an interesting name for a beer missing the coffee. Muscular chilis assault the tongue & palate while banishing the balance of the ingredient team to the back benches. Nice dark malts with nearly unheard hints of chocolate, coffee. Nice & thick, but half a bomber is just fine.

Popped at about the same age as my first encounter with the base Mexican Cake, but the chilis are even more aggressive in this thing. Pretty good, but I can see this improving markedly with six to twelve months to allow the heat to wither a bit.

Thanks to BrutalFarce for this one, from his ninja box during Rookies BIF #2. 22oz bottle, poured into 12oz goblet. Poured the expected solid black color with 3/4 inch of tan head that had OK retention and lacing.

On top of the base "stout" scent, I picked up a hint of cinnamon, light licorice, just a teensy bit of coffee, some light chocolate (maybe from the malts?), and a couple notes I couldn't quite put my finger on. A busy olfactory experience indeed. All of the above applies to the flavor profile, with the addition of a hint of spicy pepperness.

The body was a bit thinner than I look for in the style, but was very smooth, and had, a bit surprisingly for all that was going on, a semi-sweet finish. Drinkability was very nice, it was the rare big stout that I would have drank a whole 22 of by myself. Overall, a very nice brew, would I would happily drink again. A must-try if you get the chance.

S - Aromas of decent amount of cinnamon and spice, nice pepper heat, chocolate, vanilla. The coffee is a bit subtle.

T - Taste is similar to the nose with nice heat, great cinnamon, solid vanilla and light coffee. The coffee is fruity as well which was unexpected.

O - Overall this was a rather solid imperial stout. I don't think this is better than regular Mexican cake, but, it's solid beer.

Appearance: Pours jet black with a two-finger tan head that has great retention and leaves strands of lacing behind

Smell: Mocha aroma, with notes of dark chocolate, coffee, cinnamon, nutmeg and a hint of vanilla

Taste: Mocha and chocolate forward, with cinnamon, nutmeg and vanilla developing; after the swallow, coffee tones emerge and, finally, the hot pepper brings some heat to the finish

Mouthfeel: Medium to full body with low to moderate carbonation; the heat lingers quite a while

Overall: A lot going on here beyond the base version; very enjoyable

I was quite surprised by how little of the spice of Mexican Cake has survived in Coffee Cake - the overriding adjunct is very much so the coffee.

But then, in the very last tiny pour from the bottle, there's a whoooooole lot of savory heat and spice.

My pour, however, was quite sedate with just a bit of spicy edge and lots of rich, acidic coffee. It's certainly no dessert stout, and definitely not on a level with bourbon barrel-aged Mexican cake - but this is a very worthy bottle with a lot going for it.