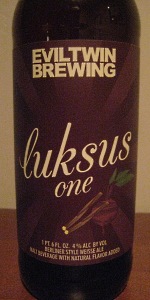 650ml bottle. Brewed with red beets? Is Luksus a Russian restaurant? I guess not, as apparently Scandinavians like them too.

This beer pours a slightly hazy, medium orange-amber colour, with two skinny fingers of puffy, loosely foamy, and well bubbly dirty white head, which leaves a bit of calved iceberg profile lace in places around the glass as it quickly abates.

The carbonation is very low-key in its peekaboo frothiness, the body a so-so middleweight, and actually somewhat smooth, after more than a hefty dose of acclimatizing and cognitive dissonance sets in. It finishes mostly dry, the lingering vegetal beet root notes sticking to one's proverbial palatal ribs, amongst some middling sour lemon, and that niggling saline character.

Wow, this is one brew that takes some time to get used to - if I stopped at the aroma (and I nearly did - gag), then I would have been lesser for it. The beet root really does come through, in spades, as does the base Berliner Weiss tartness and crispness. Not sure though, that I'd want to order this on a summertime patio; however, I'm not Eastern European, and there's not a bowl of borscht sitting in front of me.

Pours red-tinged amber with a white head.
Nose shows earthy beetroot notes and lemon.
Flavours include more of the same with big acidity and some light fruit.
Pretty awesome and unorthodox.

Very much not for drinking. More for eating, but even then... I don't know. There's a real lack of balance about it and a distinct 'cooking ingredient' feeling to this beer. The flavor is interesting but not delicious – and not even interesting beyond a few sips. What a shame. This is a beer that makes me feel like beer has jumped the shark. A small glass might be nice with the right food, but it was terrible mistake to attempt a bomber by myself. To be honest, this is a borderline drain-pour.

Luksus One from Evil Twin Brewing
Beer rating: 85 out of 100 with 16 ratings