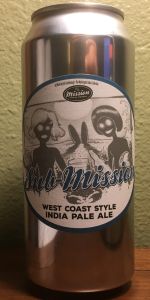 Pours a light straw color - slightly cloudy. Frothy white head dissipates steadily but not completely leaving a quarter inch layer of white velvety foam. Not much in the way of lacing is left behind. For a west coast IPA, this beer is lacking in any clarity.

Smell has lots of pine and sap with hints of lemon, lemon grass and grass. There is also a dank weedy aroma that pops on and off of the nose as you consume it.

Taste is very piney up front with a woody quality to it. Notes of sap, lemon grass, hay, and weed all come through giving way to a very bitter finish that lingers on the tongue. Crackery malt backbone does shine through but takes a backseat to the bitterness.

Feel is thick and syrupy with a oily slickness. Mild carbonation that does provide some prickliness.

Overall there are some glaring issues of the beer - the appearance is very cloudy almost hazy, but for a west-coast IPA you aren't looking for that. The beer is overly heavy and oily as well. It needs to be "cleaner". However the flavor profile is very nice - Its easy drinking and neutral making it easy to pair with any situation. I'd certainly drink this again.

Draft at Mission Taco Joint, served in a tulip.
Thanks to Steve for the tip on this place!

Bright orange gold, nice clarity, lasting frothy head with lacing around the edges.
Aroma is pungent with piney and citrusy hops. Taste is moderately bitter with more citrus and pine notes, well blended and nicely drying in the finish. Pale malt presence as well that rounds it out.
Overall this was really good and paired well with bahn mi and duck tacos.

Light gold in color with an inch and a half of densely packed creamy off white head. Light lacing. The aroma is packed with plenty of piney hops with some light, crackery malt to keep things in check. The nose is reminiscent of Green Flash West Coast IPA, but not as aggressively hopped. The taste is much more muted on the hop front than the nose implies. Lightly piney hop flavor that seems rather thin and where it ends and the light malt begins is a mystery. The mouth is lightly sticky and chewy.

Poured a clear, copper color with a white head of foam. Nice head retention and it left sticky rings of lace. It smelled piney with some strong citrus notes. It tasted of pine and orange zest with a sweet caramel backbone. Good burnt toast maltiness. Good balance. It was crisp and very smooth.

I wasn't sure about this IPA out of the gate but it's growing on me. Half way through it hits me that this is a Goldilocks brew. Not too anything...just right. Good balance of malt and hops. Finish is just a bit sticky but not a lot. Solid job.

brewed for the mission taco joints from what i gather, thats where i had this on tap, really one of the least impressive beers i have ever had from these guys, still solid, but oddly generic and sort of uninspired tasting, not at all what i have come to expect from 2nd shift. its a little murky from the tap, a burnt orange to really light amber color, darker than i was anticipating, but still has a big tall white head on it and visible carbonation rising up. smells a little tired to me, less refined than i am used to, yeasty in a weird way, and bitter without a ton of hop aromatic, fruitiness, or freshness, at least to me, balanced though, with a relatively sturdy malt layer. the flavor is fine too, a northwestern hop profile with more pine notes than anything else, balanced again, but not very interesting at all. a honey note, some toasted warmth to the grain profile, and a swish of oily hoppiness, but then its fairly dry and its gone. not sure this really does compliment tacos all that well, i would prefer some of their other hoppy beers to this one. it seems overly safe, and like they were confused how to do that well, make something a little more mass appeal than their general audience would go for, maybe thats just in my head, but to me this is the least exciting of all the hoppy beer i have ever had from 2nd shift...