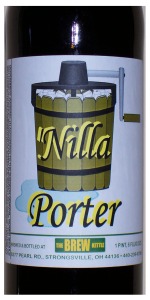 Purchased at the brewery in a 22oz bottle.

A: pours in the glass with a "hissing" sound like CO2 coming off soda when poured into a glass - head immediately dissipates, dark rosey brown color, clear
S: medium nose with light roasted malt and some enticing vanilla
T: ugh!, thin, watery no body, almost soda-like in sweet taste, very little roasted malt, some vanilla
M: thin, watery, disappointing
O: this one was a huge disappoint from BK after trying their pils

A 22 ounce bomber bottle poured into my nonic Imperial pint glass. The porter appears a clear cola brown color with about a finger of quickly fading light tan foam. Nose and flavor are of molasses, brown sugar, artificial vanilla flavoring, medium toasted and roasted grains, some sweet caramel that really shows through as it warms. Decent carbonation with a somewhat thin body. Not the best thing I've had from Brew Kettle.

Now this one I had actually been looking for a little while,. I had heard about it and was very intrigued to try it. Trading for it recently, I decided to open it up with dinner last night. Twenty Two ounce bottle was served chilled and poured into an oversized wine glass that was consumed on 10/23/2008.

The pour was decent with a very dark brown, nearly black color coming forward from it right away. Nice opaqueness to it as well, as only some light shards of light were visible on the sides and bottom of the glass. Nice notes of tan in the head color, which reached a height of around two inches before settling down to just a thin veil across the top for the remainder of the session.

The aroma was light, not nearly as big as I would have thought it would have been. Very sweet with a noticeable amount of vanilla and candied sugar being evident, but that was about it. No real depth to this one at all. The same followed through on the flavor. While not being bad really in any way it just was not as full, or as big as I would have wanted it to be. Lots of artificial cake like flavors, lots of sugar, and not much depth. Hints of caramel and molasses with a good dose of Vanilla flavoring. Lack of carbonation led this to come off as a bit slippery without much in the way of good feeling to balance it out. Sippable due to the obscene amount of sweetener in it, but nowhere near as drinkable as it should have been.

In the end, I think I would pass on this one again. It was just not crafted well enough for me to really take notice of it. Still better then some others, but a disappointment overall.

22oz. brown bottle, purchased at the brewpub during a Cleveland visit about a month ago, poured into a pint.

A: Pours very dark brown, nearly no light. A short head forms and falls to a thin skim. Some lacing.

T/M: Very dry with a weird veggy/rooty/starchy taste. Vanilla is sickly sweet. Some old coffee with a bit of bitterness. Body is a creamy medium.

D: This was a drain pour, unfortunately. I bought it from their fridge and kept it in mine the entire time I had it. Maybe it was a bad bottle... IDK.

A: Pours a dark brown with reddish highlights. A foamy one-finger head on the pour subsides to a frothy ring that clings to the glass at the top of the brew but leaves little lacing.

T: Plenty of vanilla in the taste, along with some chocolate and cream soda flavors and a milk stout sort of sweetness

M: Silky smooth with a medium body and light carbonation. The finish leaves a sticky sweet sensation in the mouth

D: The smoothness and pleasant flavor of this beer make it very easy to drink, although this gives me the feeling of a dessert beer, so I probably wouldn't want to drink this on a regular basis. Still, very good and reccommended.