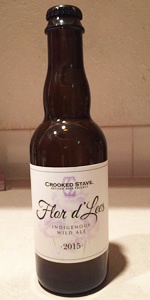 Notes: Indigenous Wild Ale aged in Oak Barrels is one of Crooked Stave’s most complex long-aged sours. Numerous barrels are sampled to get just the right blend. Never one to be complacent with brewing tradition and classical styles of beers, Flor d’Lees walks the lines of the most ancient of beers.
View: Beers | Place Reviews
Reviews: 7 | Ratings: 86 | Log in to view all ratings and sort

Pour to Duvel tulip, yellow with slight haze, minimal head that fades rapidly, very minor lacing. Funky nose with a bit of cheese, some bright citrus. Lactic sour melds with funk on the palate. Lemony sweet tarts. Decent body for the style and has a fizzy/stingy feel without a lot of bubbles.

Hazy, almost milky, not much for head or lace but a small pour size, cheesy, gym socks, lemon, vinegar, weedy, floral, super funky, has some weight and the bubbles fluff it up, interesting stuff anyways

Poured from bottle into shot glasses.
Pours tiniest bit hazy, perhaps got some sediment in there. Very light straw color. No head whatsoever.
Aroma is bright, light citrus - lemon, bit of hay-like funk.
Flavor is surprisingly dull. Like a rustic berlinerweisse. Lemony, tart, slightly acetic, some wheaty graininess.
Overall, light drinkable sour beer. More berlinerweisse than lambic. Less intersting than the label would lead you to believe. Wouldn't try it again.
This was for the 2015 version.

5.0% ABV. Reviewed live as a wild ale per the label. Served cold into a tulip and allowed to come to temperature over the course of consumption.

HEAD: ~5 centimeters wide. White in colour. Not real creamy or frothy, but billowing and fluffy. Appears soft. Retention is nice - ~5-6 minutes. Leaves no lacing as it recedes.

BODY: Cloudy nontransparent yellow. Colouration is dull and thin, lacking the vibrance that would set it apart - as well as the "golden" characteristic mentioned on the label. In short, for a golden sour it's surprisingly non-golden. No yeast is visible within, but I think that's just because this is early in the pour; I notice a great deal of yeast and eponymous lees about the bottom of the bottle.

It's a decent looking sour ale. Lacks unique or special characteristics to help it stand out.

AROMA: Lemon. Farmhouse characteristics.Plenty of brettanomyces funkiness. Neutral Belgian blonde malts. Downplayed/subdued hops bring subtle yet complementary notes of flowers to the table. Soaked damp oak is present from the barrel aging, but I don't find rich white oak, barrel sugars, vanilla, etc.I do find some tame sourness - maybe a 4/10 in terms of intensity. It seems to come from more than just straight lactobacillus; I suspect the involvement of other bacteria or wild yeasts.

It's a gentle aroma, suggesting a nuanced brew with plenty of subtlety - but perhaps ill-enough sourness for the pucker lovers.

(In contrast to Flor d'Lees Batch #1, this seems less sour yet more complex).

TASTE & TEXTURE: Has a nice smackiness to the texture, which helps accentuate the bacterial sourness brilliantly, bringing out notes of lactobacillus and some other bacteria...maybe pedio? The beer's above-normal acidity plays into the farmhouse characteristics nicely, emphasizing dampened hay. The Belgian blonde malt backbone is pretty neutral, letting the bacteria seize the reins. Funkiness about the beer suggests brettanomyces' involvement. Subtle floral hop notes lend still more complexity to an already impressive flavour profile. But through it all, the beer maintains its balance, never coming off too sour (though indeed, more sourness would be welcome) nor too bitter nor too sweet. Tartness is comparable to its sourness.

Ample sour lemon (with accompanying zest) is dominant in the build.

I have to wonder how long this was aged in oak, and where the barrels were sourced, since the oak presence is minimal. Rather than embrace the oak and have it unite all the harmonious flavours, Crooked Stave went for a very reticent barely noticeable oak presence - seemingly squandering the potential of the use of a barrel in the first place.

Flavour duration and intensity are both above average.

Elaborating on the mouthfeel, it's soft, wet, smooth, and slightly overcarbonated. Aptly light-bodied, with fair heft on the palate. Never syrupy or boozy. The mouthfeel succeeds for the most part, though it doesn't elevate the beer as a whole. Its smackiness and acidity are its most mentionable attributes.

Overall, this beer does exceed the sum of its parts, but like its Batch 1 predecessor, it's somewhat plain and reticent, lacking both the depth of flavour and diversity of flavour of superior beers in the style. Nevertheless, it's definitely a success at what it's trying to be - a drinkable golden sour imitative of finer beers brewed in the Senne Valley.

Side-note: I taste no lees - at least not to the extent you'd find them in, say, a Unibroue beer.

OVERALL: A pleasing golden sour with plenty to offer the sour lover, though some drinkers will find its bacterial presence still too restrained and its sourness not puckering enough. I find it very drinkable, and will look forward to trying future batches. Crooked Stave offers evidence their high reputation is well-earned with this quality brew, though the price point will put me off to cellaring any bottles.

a pretty vigorous pour left this one looking like barbasol on top and centipede (atari, not the scary basement monsters) on the bottom. the head settled pretty quickly but the beer remained pretty carbonated. color is a pretty pale yellow (i deliberately omitted the comma there).

smell is bright - vinegar and hay and lemon all jump forward. tongue and nose are in agreement here - flavor is sour lemon that lingers just a touch. oak is an afterthought, in terms of i'm more reminded of autumnal leaves than wood.

with all that tartness, there's no way that this one washes clean right away, but nothing really lingers.

this was a perfect beer for the season - warm summer night with the hint of fall around the corner.

A: A nice straw, golden color. Not a lot of carbonation. S: Nice oak and lemon zest. Some tartness. T: Lemon zest, and a nice oaky dry finish. O: A very good brew. One of the better CS brews that I've had.

Poured from the bottle a bright lemon yellow with one finger of bright white head.

The taste was definitely a sour with bold strokes of lemon zest, apple cider vinegar, and wheat.

Lighter bodied and very dry with a sharper carbonation.