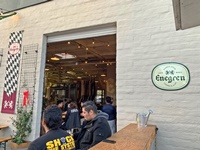 Enegren Brewing is located in a business park in Moorpark.

The day I went, there was a food truck and live band playing right outside their building. Inside there was a small bar area with some seating with the production area next to the tasting room. It was a nice comfortable place to enjoy beers. They had about 10 beers on tap. Service was prompt and friendly.

I had a nice time. I will return when in the area again.

Visited on a Sat night and my first impression was that it was too small. After spending an hour or so I realized that it's size added to the charm. Polite adult crowd. The food truck offered a heavier fare than what I prefer, but it was a great compliment to the business. I tried their Valkyrie and stuck with it all night. Why change if you found a perfect beer? I rated the selection 3 only because most beers on tap that night were a little heavier.The bartenders made the evening with great service.

There are a half dozen breweries in the area. Having gone to about 10 now, enegren holds it own, is above average quality, and is great all around.
They go for the hidden, hole in the wall motif being in what looks like an industrial/ storage facility in a cul-de-sac, which I prefer.

Beers are good, and they have 10+, which is a good selection.

I prefer darker beers, Porters, reds, ambers, stouts. They have plenty to choose from.

Classics like euro style beers, IPA s, and your barrel aged, Choco, coffee type beers as well. They typically have a nitro but no cask.

Friendly, and the bartender's are happy to give you the history of beers there, etc. They showed me how the to go canning machine works.

Crowd is young on weekends and older locals on weeknights.

They have live music, trivia nights.

I really liked Enegren. The people were great, the atmosphere quite nice for a small brewery. The brewers were engaging and willing to talk, so all in all, a really nice place. I will certainly return when I make my annual west coast jaunt and look forward to trying new beers and revisit some of the ones tried on my recent trip.

Stopped by for the first time Saturday afternoon to sample this nearly two year old local brewery. On my list for a while and glad I finally walked through the doors. The place was absolutely jumping and alive. A smallish place in an industrial park with no clear signs leading up as one drives into the general area.

There were about six brews on tap - I went for a sampler of four. Not taking notes when on site, my general review from memory is a very assured two thumbs up. One brew was a rye-wheat based beer that was both unique and extremely enjoyable. IPA was very good without being over the top on the hops, though it had solid hop bitterness. The 2nd anniversary brew was simply outstanding. Happiness in a glass!

Hoping that there are many more anniversaries to come for Enegren.

I just moved back to So Cal about 3 weeks ago. I heard of Enegren through the grapevine, so to speak. I'm quite surprised that none of my friends knew of it since they're all fans of anything fermented and only about 7 miles away.

I tried their Black IPA and my friend tried their Alt. I enjoyed my beer quite a bit. It wasn't overly hopped nor was it super roasty, I felt it had a nice balance. I should note that I do not review beers nor do I care to. My friend, who is not a beer drinker, seemed to enjoy the Alt. Service was pleasant and friendly.

It is a nice little spot in good ol' industrial Moorpark and you can stop by Wood Ranch for dinner after! My only real complaint is that I've never seen their taps around town, so I'm not sure where to get their beer outside of the brewery. I plan on asking about this next time I go and hope to make this a regular spot for myself since it is so close to my home.

Small little tasting room off the brewery- visited on a Wed night ( they are now open wednesday ). A couple other people hanging out, one of the owners was working the bar-really nice guy, talkative about the beers and even gave our kids cookies. Fun place to hang out, tried all of their beers , most were interesting. A little of my beaten path but well worth the stop. Would stop in again or try on tap, particularly liked their hoppy offerings. Thought the taster and glass prices were very reasonable but the growler prices seemed really high - $8 for empty 1l, $15 for empty 2 liter , then about the same to fill them. We're also doing 750 caged and corked while you waited (fun) of their 1st anniversary beer.

Stopped in today to celebrate their 1st Anniversay along with many, many other fans and locals who wanted to show some love to this establishment. A single unit in an industrial park at the end of a quite cul de sac. Enter from the front into a small office with drafting table and T-square (somebody is an engineer here). Through the door into a small, 2 stool, wooden bar tasting room with malt and grain storage and cold box. Beyond is the brewing system floored in concrete with 2 skylights overhead. Nice touch on placing the big red lettered "Approved" Conditional Use Permit over the door. On this special occasion there were 8 taps and a cask to choose from. All were very good. The crowds grew as the afternoon progressed and the folks behind the bar were swamped. I'm sure it's not normally like this. Overheard they may be expanding - excellent. For me the most interesting thing was the buttons and switches on the bathroom wall. Oh how I wanted to push the yellow one for the horn. Maybe next time.

I visited Enegren Brewing Company today to check things out. Located in a business park, Enegren is a small location with a very small tasting area and the actual brewery within a single suite. It was neat being able to see and smell the brewing going on while I was tasting the beers. I was able to talk to a few of the employees and one of the Enegren brothers about the beer which was nice. Quality is obviously very high since the beer and tasting area are in the same space. They only had 4 of their beers on tap and there is a restriction as to how much you can taste in a certain timeframe. I got the sampler of all 4 beers which was $5. I also got a growler to take home which was $8 for the glass and $9 for the fill. I am glad I checked this place out and I will be back for sure in the future.

Have visited the brewery twice, both times had good service and was greeted by the owners/brewers of the place.

The ALT and the IPA were both very solid. I am really excited to try some new offerings from this place as they grow and expand.

Definitely recommend this place to friends. They do have restrictions on how many tasters you can have, but unless you are a frat boy, it was the perfect amount to try all of their offerings.

Growlers are nice and they sell tasting glasses and t-shirts if you are so inclined.

So far Enegren is the first, and only brewery in Moorpark, and being that they are less then 10 minutes from my job, I made it a point to start following their blog earlier this year. 3 young guys are the owners, Chris Enegren his brother Matt, & their mutual friend Joe. All three are very down to earth guys, each with unique talents beyond brewing that they have brought to the business (Engineer, Accoutant, & Marketing majors respectively)

They have only been open a few months, coming up on 6 I believe, and so far I've liked what they have brewed up so far. Their brewing system is unique too, as they use a sort of Ipad like touch screen, which is a 3D representation of the system, with real time displays of temperature, flow, volume, etc. Some control's also work from the screen as well, pretty impressive for a small nano, being engineer is a good skill to have.

So far they have two regular offerings. Protector, which is a Imperial IPA, and Valkyrie, a Alt beer, the latter of which is so far my favorite. Some variants of each have been made as well. They have had some seasonals, their summer session, & foliage pale ale, both were pretty solid as well. They already have an oatmeal stout in the fermenter for their winter seasonal, that should be ready in a few weeks that I'm really excited about.

Small space, but clean and nice, and everything is new of course. Tasters & growlers are available at the brewery too. If you’re in the area, check these guys out, and keep an eye on them.


Enegren Brewing Company in Moorpark, CA
Brewery rating: 3.99 out of 5 with 336 ratings