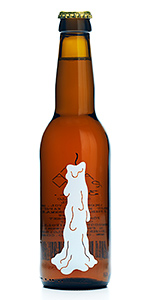 Columbus, Amarillo, Chinook, Citra and Simcoe. 48 IBU. No hops were added during the start of the boil.

More tropical forward than you could expect from an APA. Papaya and mango aromas are vying for dominance with, but being equaled by the grapefruity citrus zest notes. Pithy astringent aroma also balanced by the sweeter, tropical moistness. Mild biscuity malt whiff here and there.

Ahh, some of the more classic APA notes come out in the palate. A gentle bitterness hits you with mild juicy tropical flavours of mango and passion fruit while pleasant grapefruit pith sunders in the background. Throughout the sip and the finish is a dryer, crackery flavour and gentle grains with a hint of earthy yeastiness. Grassy cereal grains that are mildly sweet are balanced by a more astringent, citrus peel bitterness on the finish.

Light bodied but towards the heavier end of light bodied, decent/medium carbonation creating a smooth, clean sip. The body of the beer is just a bit more slick than typical lagers or APAs, likely thanks to the presence of oats. Bittersweet finish that is a mix of general malt flavours and bitter citrus peel.

Omnipollo are very well known for their NEIPAs, and this beer is definitely a fusion between an APA and a NEIPA. If either of those beers are your thing, you’ll enjoy this. And if you love both, then you’ll love this even more. It’s a unique take on an APA, some might say this is just a pale faded version of an NEIPA, but it’s definitely unique enough with a crisp, easy drinking body that anyone could enjoy.

4.2/5  rDev +7.1%
look: 4 | smell: 4 | taste: 4.25 | feel: 4.5 | overall: 4.25
A- Impressive looking beer....super hazy, like this is opaque.....golden yellow with bronze hues....actually looks like a hazy IPA brew. The head is white in color, frothy, and comes with nice retention....eventually settling into a thick layer over top the beer. Lacing is thick and sticky, with plenty of foam clinging to the inside of the glass....overall this looks like an unfiltered apple cider....very nice!

T- A well balanced sweet malt profile, and bittering hops to help round everything out. a nice fruity balance between the citrus fruit and the tropical fruits as well....the grapefruit tartness and papaya/guava/mango sweetness are most noted here. I also get the oat flake dryness, cracker biscuit, and yeasty robustness. The finish is somewhat sweet, with caramel lingering on the palate and a bitter oily hop like character hitting the back of the throat. Overall it is very clean and inviting!

M/O- Medium bodied and the carbonation is soft enough to allow the flavors to show off for themselves. Highly drinkable fare and I am quite enjoying the well balanced nature of this one. The alcohol is hidden nicely and a person could really pair this with anything....from beefy/robust to spicy and light, I could have this with anything really. Love the clean looking design on the can with the melting candle....Id buy this again and recommend it! Nice job!

Taste - citrus and tropical hops upfront. The mango, peach, papaya, tangerine, and hint of guava come through next. The oats add a nice chewiness to the brew. The bready malts, caramel, and earthy yeast round out the brew,

Overall - A pleasant rendition of a "New England" APA. It hits all marks of the style with the oats adding a nice chewiness to the brew.

Reviewed by TerryW from Canada (ON)

Pours a turbid, hazy pale golden-yellow colour, producing nearly an inch of foamy, soapy white head that recedes within a minute or two. It leaves behind a messy smattering of sticky lace, in addition to a frothy collar and thin cap - looks good to me. Grapefruit, melon and peach on the nose, with lesser notes of orange, passion fruit and piney hops also coming through.

A fine pale ale indeed, boasting a robust malt backing of bready, wheaty malts and oat sweetness with plenty of hop goodness layered atop. I'm getting big notes of white grapefruit, with flavours of melon, apricot, orange and lemon also coming through prior to an increasingly piney, resiny, earthy tail end of moderate bitterness; citrus pithiness and stone fruit fade into the aftertaste. Medium in body, with fairly active carbonation that gives a nice, crisp bite to this brew's fulfilling, almost sparkling juice-like mouthfeel.

Final Grade: 4.12, an A-. Omnipollo's Maz is one of those beers that was simply ahead of its time. These days, hazy pale ales and IPAs are commonplace on both retail shelves and draught beer lists, but I can't imagine that the same thing was true in 2011-12 (or whenever this beer was officially released). It's one of the better hazy, hoppy pale ales I've tried as of late, easily outpacing most of the local competition with a delicious brew that is juicy, bitter and sweet all at the same time. It's a little steep at $4.25 per can, but worth the price of admission IMO - I'd buy this on a regular basis if I could, and must encourage other hopheads to seek out and try this one.

Smell - Grapefruit for sure, also some orange and passionfruit. A nice depth of tropical aromas.

Mouthfeel - Medium bodied, very smooth and rich textures (thanks oats), carbonation is middling. Kind of gives off a smoothness half way between a convention brew and a nitro stout.

Aroma is of citrus and fresh grassy malts.

Flavor is of citrus, bready malts, straw and grassy notes, and a bitter hop finish.

Pretty nice. Drinks very easy. Flavor is good and refreshing. No complaints, would have again.

3.72/5  rDev -5.1%
look: 4.75 | smell: 4 | taste: 3.5 | feel: 3.75 | overall: 3.5
Just figured out it is an 8 month old tallboy can!!
Pours a weak orange juice with a huge, fluffy white head that retains. Some carbonation, not much. Big time lacing.
Candied citrus fruit hop with the pineapple coming to the forefront.
Grapefruit, pineapple, apple and tangerine in taste. The hop has a unique bite. Malt shows up in plenty on the back end.
Medium mouthfeel.
Disappointed for a hard to find beer.

Overly carbonated, sprays foam out of the can and easily puts down 4-5 fingers worth of head. Smell is hops of all types: pine, dark fruit, tropical fruit, pepper, weed, garlic armpit.... great for a pale. Taste is a little boozy for 5.6%, with some bitter metallic unpleasantness, but otherwise good: harsh roasted grain and juicy vegetal hops finish with a honey-like sweetness. The dank hop flavor lingers... Smooth and not overly bitter or "too hopped", great balance

Very good pale ale, even with some age on it. Now I need a fresh one

Smell: It has plenty of citrus aromas with some grapefruit and stone fruit. The stone fruit is quite sweet which is complimented by some grainy sweetness. As it warms, the stone fruit takes on a peach and apricot combination.

Taste: The stone fruit is the most prominent in the flavor with the citrus and grapefruit flavors adding a low sharp tinge in the background. There is some grainy sweetness to it.

Feel: The bitterness is moderately low and pleasant. It has a medium body with a very slight slickness on the tongue.

Overall, a great beer for stone fruit lovers with the other elements supporting that presentation.

Reviewed by Dr_Gonzo from Kentucky

Peppercorns are much more present in the taste than the aroma, and are a key note. Cracker and wheat provides a soothing body for this beer. The bitter citrus peels, that of orange and grapefruit, are mild and easy to taste, and even so there is still a nice citrus composition to accompany the pine, cracker, wheat, and peppercorns. There is a mix of juices from oranges and pineapple. I also even taste a little bit of lime. Overall, the aroma follows the taste well and is a balanced beverage between all the complex malts and hops. Medium-bodied.

Reviewed by VoodooBear from Puerto Rico

Appearance: The bright white, one finger head goes away fairly quickly and leaves behind a lot of lacing in small and big patches. It's a hazy, bright gold color.

Taste: It's juicy and fruity at first with hints of grapefruit, lime and orange peel. That's followed up by a subtle bitterness in the aftertaste of earthy pine, hop resin and some grains.

Mouthfeel: The texture is fantastic and easily the best aspect of this beer. It's smooth and ever so slightly creamy but still crisp and very refreshing with a medium to light body and medium-high carbonation.

Overall: This is a superbly well balanced and versatile beer with a lot going for it. It tastes great, the texture is just top notch and at a very manageable 5.6% ABV you can drink this anytime, anywhere.

It’s got a nice hazy golden pour, with soft white head rising to a low level and leaving heavy layers of lace retention in its wake.

The nose on this is surprisingly dank, with some malt emerging but balanced still by a grassy, earthy predominance.

Again, this beer is hoppier and pithier than I expected. with a noticeable malt presence but getting more zesty orange peel and grapefruit as it opens up further. A re-emergence of piney , potent hops, but this beer is holding up really well. The hop bitterness is softened really nicely by the inclusion of the oats.

Soft-bodied beer with medium carbonation and a good amount of sticky mouth-coating left behind.

Reviewed by tkarsies from Ohio

Cloudy like a NEIPA. Nice. Lacing is thin but lasts.

Dank hops on the nose

Taste hop forward. A little pine and floral, more citrus. Malt holds up but in the background

Mouthfeel like a NEIPA. Not much carbonation at all. Sticky at the end

I like this. A lower ABV beer that reminds me of a real NEIPA. Not the disappointing lack of balance that I get from session IPAs. Happy to have gotten to try this. Would have it again if I ever see it

The aroma is prickly and weedy, bordering on earthy.

The taste morphs back to a bitter pale ale from the smell. There's a better malt start but it's a bit grainy. The hop is the strongest element, giving this beer a long bitter aftertaste. Neutral body with a slightly elevated carbonation. Overall, it's a pleasant, if bitter, American-style Pale Ale.