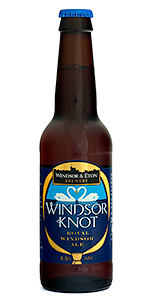 Notes: Originally brewed to commemorate the wedding of HRH Prince William and Kate Middleton, but due to on-going public demand now one of our regular beers.
View: Beers | Place Reviews
Reviews: 9 | Ratings: 12 | Log in to view all ratings and sort

A barely above average ale. Good, but not good enough to have twice.
Looks the part as I want to drink it. Smells mostly of malt. Taste has enough hops and not too many. Balanced. Finishes dry-ish and has good bubbles to cleanse the palate.

I give some big OA hugs to these guys for their efforts to promote craft brewing in London. They also have perhaps two dozen pubs centered in and around Berkshire. While I'm not one to understand this whole royalty thing, I recognize good marketing when I see it. And Windsor Knot is so. They even did another rendition for the Harry and Meghan wedding. Worth a try. But, someone else has to go figure this royalty thing... and now the babies !

L- Mid amber, very hazy to the extent initially it has lumps of sediment floating about. Pours with thin white head that swiftly clears to lacing. I'd totally missed that this was bottle-conditioned, my fault for not reading the lable; so I won't mark it down for the mega-haze as it does warn about this.
S- Is absolutely nothing like the English Bitter it's categorised as. The dominant note to me is lychee, amongst a broad 'perfumed fruit' aroma. This often suggests it's going to be hops-forward.
T- OMG it's bitterly-dry, way too far for me on a light 4.5%. I get some grains as well, but the sourness of the hopping entirely dominates for me. A small facet of 'perfumed' fights through on swallowing.
F- I have had some fashionable 'hipster hop-bombs' that I've found almost undrinkable; this is not at that extreme, but it is heavily hopped and too much so for my taste.
O- I thought this was going to be an interesting local Windsor beer that I bought on a recent day-trip there. The absence of kiddy-cartoons on the packagaing led me to think this would be something more traditional. So it was a surprise to find that behind the sober packaging was an entirely modern style of brew. Not a purchase I'd repeat.
BB is tricky to locate as it's in black ink on a v dark blue background. It's just under the barcode, mine was 15/9/19.

As Bark observes below, I think this is mis-categorised under 'English Bitter': It's not, there is nothing really traditional or generally sober about this beer as that Style usually deliniates. The lable iself refers to 'Royal Windsor Ale'. I also agree with Bark that the Style is in keeping with American Pale Ale and believe it should be recategorised. Perhaps if one more person concludes this, they can 'Suggest Edit' from 'Beer Tools' just above the top of the bottle image above?

330ml bottle as a gift from Windor:
It not all that often that I get to try a new English bitter & to be honest this one has just reminded me why, it's definitely a basic offering with very little going on but it was still drinkable throughout thankfully. It's not so much that it's a bad beer but it wasn't all that interesting either with only some biscuit malts & a bitter, nutty finish grabbing your attention' I can't imagine this one is a beer that I'd have again sadly.

11.2 oz bottle, served in a half pint nonic glass. No date on bottle.

Mouthfeel: A bit thin, light carbonation, but as you would expect from a bitter in a bottle. A bit sticky on the teeth.

Overall / Drinkability: Not bad. Reminds me of a Fuller's London Pride a bit. Very drinkable, could have easily had another.

Fresh nose and hop-forward flavour. Brewed using both Sovereign and Nelson Sauvin hops, so this is an English pale ale with a bit of NZ exoticism thrown in. Grassy, bitter and fruity.

I liked this. Traditional with a twist. Really good drinker.

The colour is amber-red (25 EBC), the liquid is clear. The two finger head is white, compact and uneven. Some lacing occurs.

The smell is powerful, especially considering the low ABV. It is dominated by the Nelson Sauvin hops: Currant bush, kiwi fruits, starfruits, nettles. But also some sweet notes of cream candy, mild sweet flavours and a touch of rubber.

The malty flavours are light yet rich in a very English way. Otherwise, it is dominated by the Nelson Sauvin hops with distinct notes of currant bush and white wine. White currants. Medium strong bitterness and a light sweetness. The body is light to medium. Even more hops in the aftertaste, clean mild sweetness and returning notes of white currants and unripe fruits. The finish is long lasting with fruit esters and somewhat perfumed flavours.

The carbonation is light, the mid-sized bubbles are light. The liquid is light and a bit dry.

This beer is all about the modern hops, I don’t agree about the “English bitter” classification. It is rather a light American pale ale. Anyway, it is a forward-thinking and highly drinkable ale, perhaps a bit one-dimensional.

Poured from a 330ml bottle into a pint glass. Note: beer brewed to celebrate the wedding of Prince William and Kate Middleton.

Pours a copper/amber colour with a small but thick white head and some good lacing also.

Smells faintly malty and hoppy too, fairly 'soft' with some yeasty undertones.

Tastes quick palatable, hefty caramel-ish malts up front with a flowery hoppiness on the finish, quite a pleasant bitterness on the swallow.

Overall a very nice way to celebrate the royal wedding, only 11 months too late!

Aromatic hops on the nose. Sovereign and Nelson Sauvin were used, and they really give a unique smell. Slightly winey, touch of tropical fruit.


Windsor Knot from Windsor & Eton Brewery
Beer rating: 81 out of 100 with 12 ratings