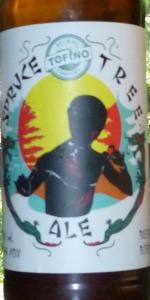 Notes: This golden ale has been conditioned with fresh picked sitka spruce tips and piney, complimentary hops. To fully understand the true essence and inspiration of this beer, walk into the rainforest, quiet your mind, breathe in deeply, and let your senses take you on a tour of the timeless and harmonious place that is our natural world - if you can ignore all the insects and deadly predators. and rain. So much rain.
View: Beers | Place Reviews
Reviews: 7 | Ratings: 25 | Log in to view all ratings and sort

Pours a nearly clear golden with a medium sized head and good retention, solid carbonation. Smell is lagery, a little spicy, looking for spruce or evergreen, but not finding it.

Taste is where the spruce tree is hiding. It's clearly present, but not overpowering (at least not on the first sip...). Works nicely with the malt body and yields something slightly honey-like as a balance to the evergreenness. Doesn't quite hide the lagery kick, though.

Mouthfeel is dry, resinous. Overall, not a bad beer.

More pale ale than "herbed beer", this is really just an American pale ale (/borderline IPA) with a profile leaning a bit more toward the piney, resin-y side of things. Bitter, herbal, almost juniper, gin-y like character, some lingering purple fruits.

Nice enough, I says, but not setting the world on fire.

650ml bottle - nice description of the island forest experience, especially the 'And rain. So much rain' coda. Ha!

This beer pours a clear, bright medium copper amber colour, with three fingers of puffy, loosely foamy, and bubbly ecru head, which leaves some random stringy lace around the glass as it slowly and evenly subsides.

The carbonation is quite tame in its lolling-about frothiness, the body a decent middleweight, and mostly smooth, just a wee green, let's just say pea pod thing, doing its usual disservice to the proverbial princess here. It finishes off-dry, the complex base malt standing strong, as the various green forest and unheralded fruity characters head to ground.

Overall, a rather tasty and engaging bitter ale - if they hadn't mentioned (or named the thing after it, for that matter) that this was a spruce beer, I would have just assumed that it was an IPA made with some experimental new hop that exhibits pine and sundry esters. Whatever, it's pretty good, with the spruce taking a supporting, instead of leading role.

Pours a deep gold with copper highlights and surprising good head. Aroma is spruce, pine, vanilla, and a touch of caramel and toffee. This beer tastes like christmas. Moderate woody and pine bitterness, followed by the spruce, which lends a slightly sweet note. There is a solid malt backbone consisting of toffee, caramel, and maybe a tiny bit of butterscotch. Feels moderately thin and finishes with a mild bitterness and sweet note. Spruce beers can be all over the mad but this is certainly one of the best ones I have had.

Appearance - Pours a clear copper with a finger of foamy white head.

Taste - hint of earthy and piney hops followed by hint of spruce and bready malts. Too bad the spruce doesn't play the dominant role.

Mouthfeel - Medium bodied with light to moderate carbonation. Finishes with a lingering bitterness from the hops and the hint of spruce lingers.

Overall - A spruce beer that plays the flavours on the safe side. I wish the spruce tips played a more dominant role.

Ov-funky/good beer , so similar to an PNW IPA ,

Appearance. Pours a rich gold, pretty much clear with a finger of white head that leaves some decent rings of lace.

Smell. Sweet grainy malts and honey, currants, and yes, fresh spruce tips (though I'm sure I wouldn't have picked this out without knowing the name of the beer).

Taste. Sweet light malts, floral hops and that interesting spruce flavour (maybe it's just the spruce, but there's some hop bitterness), some currants and a fresh wooody flavour, lingering floral/herby bitterness. Quite complex.

Overall. It was tough to judge what category this is. Maybe a pale, tastes a little bit gruit-like, possibly an IPA because there's some decent hops there. I think the herbed/spiced beer suits this best. Quite complex and I'm sure I'll get something different out of it the next time I try it. Interesting stuff for sure.


Spruce Tree Ale from Tofino Brewing Company
Beer rating: 83 out of 100 with 25 ratings