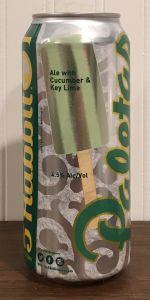 Aroma is cucumber, a tinge of lime and lots more cucumber. It too much - I want more lime and a bit more balance. Admittedly I'm also a bit sensitive to cucumber in beers so the "too much" may be just me.

Taste follows the nose with lots of cucumber, a bit of light slightly tart lime. Bit of light wheat notes on the backend. As with the other beers in this series, they flavors are smooth and bright.

Feel is light with some moderate carbonation. Dry finish.

Overall another unique beer and intriguing installment in the Paletas series. The cucumber in this was potent - if you like cucumber, you will likely like this one. If you don't then you probably won't like this. Either way, its well worth trying.