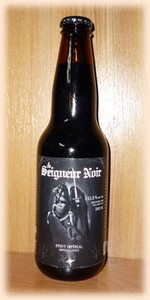 L: Pitch black. Creamy, dark tan color head that is slow to rise which I'm assuming is due to the viscosity of the beer.

S: Sweet malt and bold roast. Far more floral hops than I would have expected.

T: Starts smooth with some caramel and toffee then ends in a long finish of roasted malt. Coffee and dark chocolate all come through. Very nicely balanced; I haaaate when Imp. stouts become syrupy messes- this beer is nicely bitter and roasty and maintains good drink ability throughout the experience. What alcohol? This beer never even suggests an ABV past 7%. As it warms even more roast comes through. A good dose of floral/ american types comes through.

F: Viscous, but not overly so; creamy would be an accurate descriptor.

O: Nice stout overall. It's been a while since I've had a stout that wasn't a syrupy, black, alcoholic mess. Highly recommend.

Bottle: Poured a pitch-black color stout with a medium size brown foamy head with good retention and some lacing. Aroma of star anise with light roasted malt/black chocolate notes and some residual sugar notes. Taste is a great mix between some black chocolates notes with loads of star anise notes and some residual sugar notes. Body is about average with good c carbonation and no apparent alcohol. I am not the biggest fan of the brewery and the previous ratings are quite bad but I actually really enjoyed this one.

Poured from a 12oz bottle.

One of the darkest pours in recent memory, black as midnight with thin head. Bit sweet in flavor with fudge and hints of burnt coffee. Was actually surprised by this one given the brewery's spotty record. Worth a try for sure.

Thanks to TC for this one. Poured into Nonic. Poured an almost solid black, just a very light bit of brown translucence on the edges, with zero head. In fact the whole beer is very still, just a few light bubbles.

The aroma was a bit on the weak side, not much malt, very light roast, and a very light (but very enjoyable) hint of chocolate. There was a noticeable alcohol scent, not surprising for a 11.5% abv brew. On the tongue, The malt and roast were even more subdued, but the chocolate was a bit bolder. Somewhat surprisingly, the alcohol was barely noticeable on the palate.

The body was OK, but certainly on the thin side of what I look for in the style. Drinkability is decent, considering the overall lack of personality. Overall, not a bad brew, but not one that jumps out at you either. Probably worth a shot if you see it.

Appearance: Poured with a half finger of head that neither laced nor stayed around. The body is a completely opaque black.

Smell: Well roasted malt with a touch of orange and with a dark chocolate note boasting a mild amount of sweetness. Didn't need a lot of warming to come out and was of respectable potency.

Taste: Starts with a malt note with bitter chocolate which then takes over with a slight floral and cherry touch that is regrettably not as good as it could be as it's complimented by a boozy note that certainly shows it's ABV.

Mouthfeel: Point get deducted for the lack of head, the high alcohol note also carries into the aftertaste as well and it's not until it calms down does a dark chocolate aftertaste come forward. Transitioning is ok, and the carbonation tends to help out the beer fairly evenly. The issue though is it falls flat around the 3 quarter mark.

Drinkability: On the heavier end of medium bodied, which I usually find impressive for an imperial stout, but sadly the fact it doesn't conceal it's alcohol content doesn't sit very well with me. Not something I'd want to drink most of the year.

Final Thoughts: I can only see wanting to drink this in two circumstances. The first is as winter nursing stout. The kind of beer your order one pint of in the winter and nurse for the night as long as possible so you don't break the bank. That said, two pints of Guinness would likely fill that niche, for probably for close to the same price. The second, would be with Oysters, where I can see the sweet playing off of saltiness of the Oysters or the lemon to cut the alcohol note down. That said though, both are very niche times, so I can't really squeeze out a recommendation here.

341ml bottle poured into a snifter.

A: Black with about half a finger of tan head. The head disappears quickly and leaves some spiderweb-like foam on the surface with a slightly thicker ring around the edge of the glass. Pretty much what I'd expect from a beer this high in alcohol.

S: The bottle says that this one would age well and could take up port wine notes over the years. To me it already smells quite a lot like port! There is plenty of dark fruit here and it is pretty light on the roastiness. I get a hint of vanilla as well. It basically smells like an amped-down port (but still strong for a beer). Very nice.

T: Raisin and other dark fruit mostly. Quite a bit of licorice too. Again, I don't really get much chocolate, coffee, or roasty flavour. Surprisingly smooth for 11.5%, although it does leave a pretty boozey aftertaste.

M: I'd say it has a medium-plus body. It's pretty low in carbonation.

O: Enjoyable, and one to suggest to a red wine lover. The fruity flavours coming from the yeast definitely dominate. I quite like these flavours but I wouldn't mind if they were toned back a little bit to allow some other flavours to be noticed.

Look: Opaque black, orange-brown head, minuscule bubling.
Smell:Toasted malt
Taste: Sweet malt toast with a bit of hops.Cherrries and alcohol.
Feel:Light and easy if you like sweetness in your beer. A dry finish.Perhaps a bit overboard on the sugar-caramel. Watchout for the 11.5%!
A nice beer for a winter evening after skiing.