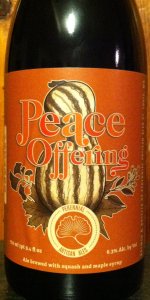 Nov 25, 2014
Rated: 3.25 by LilLebowskiUrbanAchievers from Missouri

Pours with a lovely, thick mashed potatoes head, off white in color. The brew is a coppery red-brown in the De Proef narrow tulip. A little something woody but I don't know what they mean on the label by "maple roasted." Some spice, like cinnamon and a touch of cloves, but mostly generic toasted bitterish spice. Huge suds that never give up. Your mustache will be covered with the stuff.

An interesting peculiar concoction. I think the Missouri squash farmers got the best deal out of this. From the 750 ml bottle purchased at Grapevine Liquors in Denver.

Holding well for the age, but not really thrilling me, worth a go, but not sure I would buy it fresher. Usually the aspects of what is basically slightly a pumped up pumpkin ale, are more off-putting when fresh

3.79/5  rDev +0.5%
look: 3.5 | smell: 3.75 | taste: 3.75 | feel: 3.75 | overall: 4
anything maple i am a lush for, so obviously excited for this beer, even though its well out of season right now, its still drinking great, and is another illustration of why perennial is on top of the world right now. look is much lighter than anticipated (and hoped for really), with a deep amber that lets plenty of light in to make it glow, and it has an inch of off white fizz, but thats gone in just a minute. aromatically, its not super interesting. i get no maple specifically, just sweetness. it smells like nothing more than a very well made but brown, which is appetizing enough to me. the flavor gives me a lot more than that though, with the sweetness of the maple and the sweetness of the grain playing off one another, but still being amazingly well balanced by the bitter gourd type of squash in here. not vegetal really, but definitely roasted. also not spiced, which is a huge plus to achieve such a complex flavor profile without it. well done. maybe a little thin in feel, but it lets the maple linger long enough. the finish is actually dry for all the sugar in here too, impressive. not exactly what i wanted out of peace offering, i think these flavors would work well, maybe better, in a robust porter, and of course more maple couldnt hurt, but i like whats going on here and respect it on a number of levels, including the absence of both pumpkins and spices. worth a try at 13 bucks.
Mar 29, 2014
Rated: 4 by Tafyob41 from Missouri

Reviewed by Misanthropy_Sipping from Nebraska

Poured into a Hitachino Nest glass, crackling khaki tone head flares up and crackles away quickly leaving a sparse, and broken grainy map of bubbles on the surface of a deep ruby to rust coloured brew. Orange tints in light areas with a sort of brown toasty shade accompanying it.

The smell is pretty nice. Has quite a few gentle touches to it. You pick up the toasty malts. A small amount of orange peel, some brown sugar, a hint of vegetal squash and then the lingering sticky scent of maple that catches my attention quite potently at the end.

The taste is a quite toasty. Almost a toasted bread flavor. This is layered over by some herbal hops that dry the beer out a bit. I definitely taste the tones of squash. It almost reminds me of acorn squash with a bit of butter and brown sugar. The maple is present but no more present than the squash is. The beer is quite balanced and subtle. But quite pleasant. It's absolutely frigid, but I could imagine drinking this in the fall or during a Thanksgiving dinner and this would be awesome. This beer and smoked turkey would be awesome.

Mouthfeel is pretty average. Fairly dry, not very bitter. On the lighter medium side. Crisp and pretty drinkable. A tad tacky with the sweetness. Not much to say. The carbonation is nice but nothing out of the ordinary for a beer of this body.

Overall it is a pretty good beer. As mentioned, I got this at a sale price and I feel satisfied. If I payed the original cost of $12-$13... I would have felt a bit down about it. It's good, it is interesting, it is not so unusual it would turn off a beginner in adventuring into odd beers but wouldn't hurt the veteran to try.