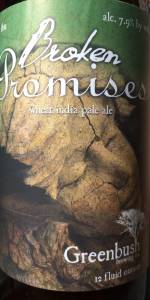 Gorgeous looking. Dark for an IPA, good head retention, nice belgian lace.
Smells of citrus hops smoothed out by some sort of soft fruit. I might describe it as mango, maybe. Definite sweet malt undertones. Just the faintest touch of wheaty.
The taste is a two part journey. It's sweet up front, then coyly slides--I don't mean the liquid itself slides, but the taste--backwards along your tongue to finish with a mild and sticky hop bitter. It's quite an interesting, and far from unpleasant, experience. Also, for 75 IBUs and 8% alcohol, this beer is hardly as "kick you in the teeth" as one might expect.
Mouth feel is about the ideal heaviness for an IPA.
This beer is solidly above average, and masks it's high BAC well. While the two-tone taste shift is enjoyable, it strikes me as something that would probably get lost over the course of multiple pints.

Poured into a becher pint glass, the appearance was an orange rust color with a finger's worth of white foamy head that slid off at a decent pace. Some speckled lace.
The aroma had some sweet orange to mango smoothness. Nice level sweet to grassy hop contour. Delicate malt base, somewhat wheaty.
The flavor was mainly sweet and then developed a sly bitterness with a little tangy bite (I'm guessing from the wheat, perhaps). Semi-smooth wheaty to orange and mango-like aftertaste.
The mouthfeel was almost medium bodied with a fair sipping sort of quality as the booziness becomes slightly noticeable. Carbonation felt fine. ABV felt appropriate.
Overall, pretty nice wheat IPA that I would have again.

Don't know that I've had a wheat ipa? The smell stands out and nicely balanced flavors make for easy drinking. Not so for head and lace but color is inviting. Golden orange. Hoppy, fruity and clean mouthfeel. I will look for this again. Makes me think of a cross between an ipa and a Belgian but not too far either way, bitter or erbal.

A pours a ruby red / brown with some head that quickly dissipates and not much cling.

O - Really solid offering from GB - definitely worth a try on this and I will come back to this.

Reddish amber with decent head and lacing. Smell has a fruity sweetness - seems all the Greenbush hoppy beers carry that sweet note. I don't really get any wheat notes in the aroma or flavor ... and the hue is darker than expected. Flavor follows through with malty sweetness, caramel, over floral citrus. OK.

I picked up a bottle Greenbush's Broken Promises last week for $2.19 at The lager Mill. I had this on tap one, but I missed out on the last bottled release and I'm interested to give this one a try, so lets see how it goes. No visible bottling date. Poured from a brown 12oz bottle into a snifter.

A- The label looks ok, It goes a little with the name and it's slightly eye catching. It poured a nice orange amber color that took on more of an amber orange color when held to the light with almost three fingers worth of fluffy off white head that died down to a thick ring that stayed till the end and it left some nice sheets of patchy lacing behind. This is a pretty nice looking beer I have no complaints.

S- The aroma starts off with a higher amount of medium sweetness with the hops which impart a mixture of fruity and green hop aromas with a little bit of floral hops showing up in the background. Up next comes some sweet malts followed by a little bit of grainy aroma with no wheat aromas showing up. This aroma is nice, but I wish some wheat showed up.

T- The taste seems to be similar to the aroma and it starts off with a higher amount of medium sweetness with the hops still being the first to show up and they impart the same aspects that they did in the aroma with the green hops seeming to stick out a little more than the rest. Up next comes the sweet and grainy malts and there's still no wheat aspects. On the finish there's a medium amount of bitterness with a hoppy aftertaste. This is a nice tasting beer, but I wish the wheat actually showed up.

M- Fairly smooth, a little crisp, medium bodied with a slightly lighter amount of medium carbonation. The mouthfeel is pretty nice and it works well with this beer.

Overall I thought this was a decent beer and I thought it was much more like a normal IPA than a wheat IPA since the wheat never really showed up in the taste and aroma and that held this beer back. This beer didn't have the best drinkability, one is enough for me, I don't really the urge to drink another one. What I like the most about this beer is the appearance and mouthfeel, to me those were the highlights of this beer. What I like the least about this beer was the lack of wheat in the taste and aroma, it would have been nice to have some balance. I wouldn't buy this beer again if I wanted a wheat IPA and I can't say I would recommend it as that, but as an IPA it might be worth checking out. All in all I liked this beer a little more since I had it on tap, but it still isn't as good as I hoped it would be. IT's not a favorite Greenbush beer and it's below average for a wheat IPA. Better luck next time guys, this one needs some more wheat.

12 ounce bottle into a weizen glass.

Pours with a two finger, thick head.. Heavy lacing on glass is like melted ice cream. Good color, haziness of a wheat beer. Smell brings lots of citrusy hops and some floral. Taste follows the nose- grapefruit and orange hoppiness, along with some malt and caramel, a little wheat. Nicely carbonated, good aftertaste.

A very tasty, refreshing beer, much better than I was expecting. Hop forward, but still nicely balanced with the malt and wheat. Only bought one bottle, will buy again. Definitely worth your purchase.

Smell: The wheat comes off a bit rye-like in this. It has a similar spiciness that rye has, but it's not as intense. The fruit aroma is mostly that of citrus and citrus rinds, with maybe a little cherry sort of sweetness as well. Slightly herbal. Very nice as a whole. (4.25/5)

Taste/feel: Wow, well that's interesting. The beer has about a medium body that has a very slick, silky feel thanks to the wheat, presumably. The rye sort of spice is also there and is a good contrast to the smooth feel. Finish is strange, unique, and hard to describe. This beer tastes like it has rye, so again, it has that spiciness, with citrus fruitiness, and mildly bitter and dry finish sometimes, other times it seems to finish a bit juicy. Light lingering aftertaste of wheat/rye and citrus peel. (4/5, 4/5)

A very good, if not great IPA in my eyes. I know it's called a pale wheat ale, but the bottle itself even says it's an IPA. Either way, it's a tasty beer worth trying out.

Taste: Sweet arrival, bitter across mid-palate. Sweet at the end, then bitterness lingers.

Overall: Outstanding - love this style; sweet and fruity. Big alcohol, but not unpleasant in the least. Could buy over & over.

this was brought to me in a 16 oz glass. about quarter inch of head. nice hoppy aroma. good carbonation and lacing down the glass. good hop taste with light balance from the malts.

this went well with the turkey Rueben they served. slight hop aftertaste which I like for a hopped brew. tingles in the mouth well.

this was purchased at their brew pub in Sawyer Michigan. a good place with a great selection of a wide variety of brewed on site beers.

On tap at Ashley's in Westland for the Shorts vs. Greenbush Throwdown. Pours a weird color, something slightly resembling a burnt copper - murky and hazy throughout. The beige head scatters pretty quickly and settles nicely into a skin that hangs around for the duration of the brew. Sadly, not much lacing was left on the sides of the glass despite the decent retention of the skin.

There's no mistaking the wheat in this beer - the first sniff is packed with a truckload of wheat, backed up by a faint hoppy character. The hops are kind of faint, especially considering the fact that this is supposed to be a "Wheat IPA". Musty, dry, and somewhat floral in character, I wish they popped a little more. Apparently these are made with Zythos hops... I'm not so sure what Zythos hops are, even, but they seem like some strange mix of an American C-hop and a Noble hop.

The taste actually contains a stronger performance from the malt and wheat than the hops. Lots of sweet toffee, caramel, and a large blanket of bready wheat. Nice mouth feel; soft and light with a very light creaminess to it. Hops take a second to kick in, but they finally arrive, albeit a little late. Again, they're slightly leafy and floral, but it's nice to see the citrus flavors come out a bit more in the taste. White pepper sprinkled over a sea of grapefruit. Bitterness is pretty low, and the hops fade out pretty quickly, leaving a finish with mostly sweet malt and wheat flavors, aside from maybe a small touch of citrus peels and leaves.

Another beer from Greenbush that is good, but not great. It's got a nice balance of flavors; good amounts of malt, wheat, and hops, although there's nothing here that's really jumping out at me and smacking me in the face. It drinks super-easy, especially at 7.6% ABV, but in a Michigan market saturated with great beers, it's doubtful I'd ever reach for this one again.

Broken Promises from Greenbush Brewing Company
Beer rating: 86 out of 100 with 91 ratings