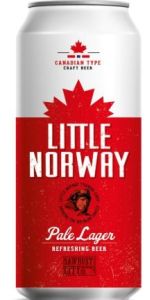 I bought a can at the beerstore in Ontario Little Norway Pilsner 473ml can at 4.7%..
Hoppy and Crisp .
Pilsner Style Lager it said in the side of can.
poured a 2finger head into glass the floral smell .
light crispy and tasty pilsner or lager .very nice bitterness it makes you want to take another sip its actually very easy drinking and light but zesty and crisp .
pure Muskoka water
barkey malt German pilsner.
hops Saaz and Magnum
yeast german lager .
ibu 25 .
overall I'm enjoying this beer it's very good .
cheers.

Look: Pale yellow, Small weak head fades away within 2 minutes
Smell: New hay
Taste: Bready and slightly tart. Hints of white rice.
Feel: Watery, fills the bottom of your mouth and front of tongue. Nothing on the palate at all. Seltzer like.
This beer earns a C+

Clean, crisp, pure, and simple. Great example of the style, well balanced and refreshing, perfect for a summer day or post hockey game. A new favourite lager, and one that will bring those Molson lovers over to craft (I had several friends try it, and it did). If people rated based on style, this would have a much higher showing.

Look is the highpoint of this beer, pale gold with a lovely three finger head that breaks slowly leaving a small island of foam. Then it seems to go downhill for me. The nose and taste are a little too sweet for my liking. I found it almost corny too. Feel was thin and watery and almost weak.

Easily my least favorite from Sawdust City. But, this style is not for everyone and I respect that others do like it. To each our own.

This is a very nice Pale Lager. Great malt depth, and very balanced and clean. I recommend this summer crusher.

Straw with tons of champagne like carbonation, and a finger of white head.

Smells malty and hopped to the hilt with grassy Saaz hops. Hints of wet cardboard as well.

Very malty, and very hoppy with big drying grass notes, and a hint of sourness. A decent bitter finish like a fresh German pilsner.

Got this at The Beer Store in Gravenhurst, drinking in Muskoka Lakes Dec 19th, 2017. Really freshly hopped, really nice lager.

473 ml tall boy can purchased from the Beer store for about $2.75 CDN. Served cold into an MGD pint glass. Listed as 4.5% ABV. Description indicates pale euro style lager as opposed to a kolsch.

Smell - clean and grassy with some sweetness in there and a hint of pepper. Based on that appears closest to a pilsner as opposed to a kolsch or a traditional pale lager.

Taste - pretty bland and easy drinking. Slight bit of sweetness, just a bit of hops, pretty non-descript. Flavor ramps up just a touch as you get into the beer, but still pretty average even for the style.

Overall - Little Norway isn't a world better, but makes for a petty good lawnmower beer, the kind where it goes down real easy on a hot summers day, and you don't want it to wow you with flavor just something cold, wet and with a little extra something to make it interesting. This beer does do that reasonably well, but don't expect to be wowed.

473 mL can from TBS; dated Oct 6 2016. Nothing on the can (or the brewery website) indicates that this is supposed to be a kölsch, or even kölsch-inspired, so I'm grading it as a German pilsener instead. Listed at 4.5% and served ice cold.

Pours a hazy, pale straw-yellow colour, with one finger of surprisingly resilient white head seated atop. It slowly devolves into a smooth mat of dense, creamy foam about 1 cm high that lasts for quite a while; a decent amount of lacing is also deposited. Grassy hay and straw on the nose, with hints of leafy, spicy hops and grainy pilsener malts. Pretty standard stuff, with a clean, inviting aroma.

Not an exciting beer at all, but as a Euro lager it meets all the prerequisites quite handily. It starts off with a clean, grainy pale malt flavour, followed by hints of biscuit sweetness, apple skin, lemon zest and finally, a firm slap of grassy, spicy hop bitterness to finish it all off. Very straightforward, but to be fair I've never had a to-style pilsener that wasn't fairly simplistic in terms of flavour profile. Light in body, with crisp carbonation that imparts a nice biting sensation on the palate; quite refreshing and sessionable.

Can't quite understand why the grades on this one are so low - I realize that pale lagers are far from the first choice of most BAs (and that a lot of people can't be bothered to grade to style), but it's still a *much* better lager than its current aggregate score indicates. I'm also impressed that it tastes this good despite being 6 months old (refrigerated TBS storage FTW, I guess). I'll return to this one at some point when I can find a fresh serving.

Another tallboy, this time from the LCBO and dated Apr 13 2018 (making this can roughly 3x fresher than the one I originally reviewed). Still, there's no reason to change the grade this time around - it's a solid Euro-style lager, though I'll grant that it doesn't really stand out from the crowd in any specific manner (and honestly, the German imports are usually better bang for your buck). That "Ontario Pilsner" that they put out last year is easily the better lager of the two, yet I still found this one enjoyable.

Very pale yellow. Subdued nose and flavour. Slightest of bitterness from the hops. Not offensive, but no real appeal either. Safe to use it to wash something down, I suppose.

This standard North American mass produced brew went well with...... Anything you would pair a Bud with