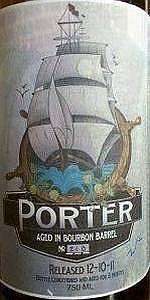 Notes: A fresh batch of Port Jeff Porter is divided into three Heaven Hill Distilleries whiskey barrels (virgin, one-fill, and two-fill), matured for three months, and carefully reunited using secret blending techniques—involving some mandatory taste-testing, of course—performed by our brewmaster. The aforementioned barrels introduce bourbon, oak, and vanilla to our traditional porter, catapulting the beer to a new level of complexity. It’s that simple.
View: Beers | Place Reviews
Reviews: 8 | Ratings: 32 | Log in to view all ratings and sort

A light and slick black pour with a soft white head that dissipates quickly. The nose gives off notes of chocolate, wood, and sugars.

The drinking starts with lots of sweet malts and sugars upfront. A tad soapy with the subtle barrel tones coming over on the finish. Nice tones of bourbon, sugary molasses, and oaky wood. The mouth feel is on the lighter side with a slight stickiness to it.

Overall, and enjoyable and decent porter.

Bottled 2/13 I think batch 2
Pours a like a deep brown ale with a 2 finger cream colored head. Smells of vanilla and muted hops. Taste starts off like a normal slightly hopped porter and ends with a nice barrel presence vanilla, toffee and a slight alcohol warming. Mouthfeel is the same as the normal porter with slightly lower carbonation. Overall good beer...its good to see a local brewery trying to barrel age beers but I think they need to get their process down...hope there is more to come from these guys.

This is from the batch that hit distribution...although possibly the batch before since there were some carbonation problems with this batch and I believe they were pulled from distro? None-the-less with that information i in tow i carefully opened the bottle and it did pop open once the cage was slightly loosened (i was ready). enjoyed from a blue point snifter.

a - brew poured a watery black with a very generous head of several fingers. after many minutes there was still a full finger of creamy mochachino looking head on the beer. lacing moved in full chunks connected to the surface of the beer and left some spotty dots of where it once danced along the glasses sides.

s - nice balanced roast and rich milk chocolate. some burnt wood and a hint of metal. the chocolate is fairly decadent, but the metal is a bit off putting.

t - big decadent chocolate with a slight glazing of metal. not as pronounced in the flavor as the nose..and perhaps it is the nose of the beer that is bringing it out in the taste, but i do get some metal on this otherwise gem of a beer. the barrel is subtle but really compliments the beer in a nice way.

m - the highlight of this beer is the creamy mouthfeel. really rich and decadent, but smooth as silk. one of the silkiest beers i've ever had.

o - overall, not sure if it was the time or the carb issues with this batch or what, but this seems to be a shadow of what i enjoyed from growler. i can taste the beer that i had in growler form, but it has a sheen of metal on it. i would definitely give this beer another go. the bottle i have has a space for a bottle number but it is not filled in so it makes me thing that this bottle does not go with the others that hit distro that are numbered. i did get this at a port jeff tasting where they were planning to release it, but decided not to due to some issue, but a few bottles were made available to those that were there. as i drank it, the metal seemed to fade away. as i mentioned the barrel is subtle (pretty sure it only spent 3 months in the barrel) but really compliments the beer in a nice way and makes this a really solid beer. in my opinion this one is worth seeking out and should be easy to find if you are local or know someone local.

A: black body with a milky chocolate head of fine fizz; settle into a fairly laceless state

M: a little thinner and more effervescent than I'd like, but clean-finishing; nice balance between sweeter, heavier feels and lighter, drier notes - fairly consistent from start to finish

O: my first bba porter - had porters, had bba beers, but never a bba porter - also my first Port Jeff beer of any sort - so take this for what you will: I liked it and found it a nice take on a porter, and I think the porter base itself was a respectable presentation of the style. No reason not to try it at all. Cheers!

Appearance: this is beer is black, yea maybe some might say it is dark brown but honestly it is seriously opaque. Tan head that rise to roughly 1/3" off the body. The head frame is thin dissipating to almost nada after a minute.

Smell: Without tasting it it smells like milk chocolate, light scent that appetizes most nostrils.

Taste: A enigmatic combination of honey, chocolate, and believe it or not butterscotch which is really hard not to like.

Mouth: medium combination which is sharp toast and it is super if not indeed almost perfect.

Overall: Well above from what I was expecting, this isn't just a brew, it is real beer. Salud!

Pours a black color with some brown highlights. The head is a fizzy brown color that settles quickly into a solid ring around the glass.

The aroma is of light bourbon and vanilla. Some woody notes but that is pretty much it. Perhaps some chalky chocolate notes. Its pleasant but not very strong.

The flavor has some nice milk chocolate notes with a smooth bourbon flavor. Similar but not up to par as a KBS. The beer is way overcarbonated, as admitted by the brewery rep, so that takes away from some of the beauty flavors. There is a nice toasted pumpernickle malt but the woody, charred goodness that the straight porter had is lost. That is unfortunate, as the straight porter is excellent. Regardless, the flavors, despite the carbonation, are very good. If they can incorporate the woody goodness from the straight porter with the lovely barrel aging from this porter and have both stand out; they will have a super beer on their hands.

I love fizzy beers but this is a bit too much as it takes away from the flavor. Moderate body and sweet on the palate but with a slight roast to balance.

I like this porter, just wish it wasn't so fizzy. Perfect kiss of bourbon and nice chocolate notes. I hope they can incorporate those loevey woody notes that I pick up from the straight porter.

S - Raisin, bourbon, vanilla, booze, and white bread. A bit of cocoa as it warms.

O - Relative to the non-barrel aged version, the 3 month edition picked up a surprising amount of fruit from the barrel and less booze and oak than I would have expected.

Note: I did not make a typo in entering this beer's name. The label on the bottle says "Porter Aged in Bourbon Barrel."

I got this from the brewery tasting room at the beginning of December 2011. Bottle conditioned and aged for 3 months. Hand-numbered bottle #210. Poured into my Portsmouth Brewery tulip.

A: Pours pitch black with as finger of creamy off-white head and moderate amounts of foamy lacing.

S: The nose is somewhat subdued. Definite notes of sweet chocolate right off the bat. Slight suggestions of floral hops and roasted malt as well. There is a slight off-aroma too that interferes slightly with the bouquet. Slight oxidation maybe? The bourbon presence is slight on the nose, but definitely there.

T: As with the nose, lots of chocolate character up-front transitions to a roasty and slightly nutty finish. The roastiness lingers for quite some time. Not nearly as much bourbon character as I would typically expect from a BBA brew, but it works since this is a porter and not a RIS. Subtle suggestions of alcohol, vanilla, and oak towards the finish.

M: On the heavier end of medium bodied, but not quite full bodied. Very smooth with very little carbonation. Impressively little detectable alcohol.

O: Not the best BBA brew I've had, but solid nonetheless. Port Jeff has only been open for a few months, so it was quite ambitious of them to attempt a BBA beer so soon. Since I visit Port Jefferson once or twice a year, I am excited to see what they produce in the coming years. I had their 9% abv oatmeal stout during my last visit and it was great - they should age that in bourbon barrels.