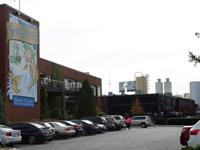 Reviewed by Cuervo_PCB from Florida

4.35/5  rDev +4.6%
vibe: 4.5 | quality: 4.25 | service: 4.25 | selection: 4.5
The newly-expanded Taproom, with 24 taps at the large rectangular bar, plenty of other seating, big windows into the brewery and outside, and with a patio and beer garden now shaded/shielded (from afternoon sun and light industrial/warehouse neighborhood) by rapidly growing trees and other screening vegetation, is filled with people and (outside only) their pooches digging the scene, the beer and the limited but excellent food from the newly-opened kitchen.

The food is pub bites, salads and sandwiches, but excellent. The smoked corned beef on the sandwich by the same name is the best I have ever had outside of Montreal. Only quibble? The sandwich could use a little more of it. But again, in a town with a lot of breweries practically none of which offer food other than an occasional truck, SweetWater stands out.

SweetWater’s beers speak for themselves. All styles, seasonals and series are on tap, and there is a nice selection of reasonably-priced cellared bottles.

Service was more than adequate, although several bartenders were prone to get caught up in extended transactions with friends and acquaintances.

Tours depart the bar area regularly, but I did not join one. Parking is limited (with a valet option), but there is some street parking, and SweetWater is centrally located for ride services.

I will go back.

Rated by Grackos from Florida

Rated by GatorCoop from California

4.19/5  rDev +0.7%
vibe: 4.25 | quality: 4.5 | service: 4 | selection: 4
Visited Atlanta a few weeks ago, and this was definitely a must stop for me. The location is a little hard to find and definitely hard to reach (impossible) without a car. Their hours are also very short, but the place was completely packed.

The tasting room has a great vibe and a ton of people, and their tour is a really good value (six 6-oz pours of your choice + a tour for $12). Most of the beers are good, and their Dank Tank really produces some interesting beers, though it could be a hit or miss kind of thing. The tours were very casual and informative.

Would have appreciated if they extended their hours a little bit, but otherwise I have no complaints. Would definitely be back if I had the chance.

Rated by Denniscl from Texas

3.64/5  rDev -12.5%
vibe: 3.25 | quality: 4.25 | service: 2.5 | selection: 4.25
I was actually extremely surprised by the selection on-hand at Sweetwater. I expected the usuals but when I visited they actually offered 4 brewery only exclusives which were very good. The service was fast, but the bartenders were not friendly at all and some just looked annoyed to be working. And the place was SOOOOOO crowded. Granted it was a Saturday afternoon, and I expected a crowd, but it was much worse than I expected.
Aug 29, 2016
Rated: 4 by DevWand from Oregon

Reviewed by Johnjason2211 from Pennsylvania

Reviewed by Brom732 from North Carolina

4.21/5  rDev +1.2%
vibe: 4.5 | quality: 4.25 | service: 4.25 | selection: 4
What a great place! For 10 bucks you get a 12oz/pint glass and six samples of beer on tap on the serving room. The tours are short but very cool! The vibe was great, lots of laughter and smiles. It was very loud inside and out because it was the Friday evening mega crowd. The beer selection wasn't all that great but they just incorporated a new small batch program that only brews a 15bbl batch of brew by the brewers there. This small batch is never bottled and is only sold on tap at the brewery, once it's gone it is gone. Overall an awesome place with good vibes and great beer for an amazing price!
Jun 11, 2016
Rated: 4.54 by Cloaked_Phantom from Washington

Rated by Rittschof from Georgia

Reviewed by mah0019 from Alabama

4.03/5  rDev -3.1%
vibe: 4.25 | quality: 4 | service: 4.25 | selection: 3.75
I've been here several times over the past years. The brewery has grown so much I need to base my review on the most recent couple of visits. Lively, relatively young crowds are characteristic. Live music is frequent. There's plenty of space, especially if the weather is good or the upstairs bar is open. Excellent tours of their impressive facility. Always a good mix of beers on tap (with an excellent selection at one of their special events) served by friendly and knowledgeable personnel.
Apr 01, 2016

Reviewed by 86sportster883 from Maryland

3.99/5  rDev -4.1%
vibe: 4.5 | quality: 4 | service: 4 | selection: 3.75
This is a must stop for any beer enthusiast visiting Atlanta. While there are a lot of good beer destinations in ATL, this place is the real deal. Authentic southern craft brewer from 97 that continues to pump out good beer and increase its distribution. Maybe ATL was late to the craft brew scene, but SWB was there at the start (at least for GA). Great vibe, great people, and good to excellent beers (try their IPA). I only gave a lower score on the selection because what they were serving was limited to what's commercially viable, vs. having a selection of one offs at the brewery itself. That said, they did have a the Hash Session IPA on cask, which was great, although served a little colder than expected.
Feb 24, 2016
Rated: 3.97 by Hogbrew02 from Arkansas

Reviewed by ctufano from Florida

4.65/5  rDev +11.8%
vibe: 4.5 | quality: 4.75 | service: 4.75 | selection: 4.5
They have most of their traditional store available beers for pour. They will sometimes have a few of the lesser available. You get a glass + some drink tickets for 10 bucks. Tours are good. Several tasting rooms (outside patio, original building two bars, new construction up stairs two bars). Upstairs bars have large windows overlooking shop floor. Enjoy going when I'm back in town. Wish the hours werent so shitty now though.
Feb 12, 2016
SweetWater Brewing Company in Atlanta, GA
Brewery rating: 3.81 out of 5 with 19029 ratings