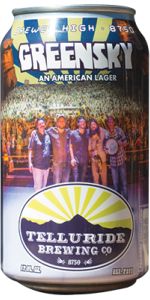 Poured into a tulip a nice clean/clear golden pale yellow color, nice carbonation, with a nice thick/creamy one-finger white head, which leaves some sticky lacing behind. The nose is malty, hoppy, with some lemon/grapefruit, kinda piney. The taste is malty, hoppy, lemon/grapefruit, piney. Medium body, ABV is hidden nicely, with a dry/bitter finish. Overall, a pretty tasty brew.

you probably will never have a bad beer from telluride, they just do a good job with everything, but this new one isnt one of their standouts, a collab with the band i think, and a nicely hopped up pale lager, but its really watery feeling, doesnt hold its head or its carbonation, and drinks heavier than it should for what it is as a result. the hops manifest themselves as bitter as well as citrusy, and while i get some nice lime and grapefruit out of it in the nose, as soon as i taste it the green bitter element sets it, not over the top or enough to turn me off, not even close, i actually admire its robustness there, but the level of refinement and dialed in-ness of it just isnt quite there for me. crystal clear though and bubbly looking, even though it cant hold its head long, and leaves an awfully clear looking pint glass, no lace around hardly at all. lemon and lime to the nose, a noble hop grassiness too, maybe a saaz hop in here, but a flavorful enough european sort of lager yeast comes in to heavy it up and obscure the hops at the end, still crisp and relatively clean, and its nice to have some yeast character in such a light lager, but its timing is strange, almost disruptive, coming out of left field. this could use a few tweaks, but if they keep making it im sure it will find its stride. nice to see new beer from these guys either way, its been not enough innovation at all from them for way too long. glad to have this around this summer...