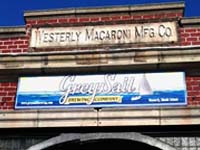 Cool vibe, very relaxed and friendly. Clean place with a nice beer garden in back. Lots of beers on tap and the bartenders are happy to pour samples. The worst that could happen here is that you get a pour of Captain's Daughter at the source.

Props to Grey Sail for being open on New Year's Eve. The brewery is right next to the Pawcatuck River and the Connecticut state border with Rhode Island. They have cans for sale in 4-packs. Bartender was nice and helpful. Food would have been nice, but no complaints.

Unique venue inside a historical home. The back "yard" is well maintained with boccie and wood fired pizza. The actual brewery is next door and has just undergone major improvements/expansion. The tap room is where you can fill a growler, purchase cans, and some fun swag.

Quick stop on my way to the airport and right before opening for growler fills. Head brewer Josh was really cool and let me sample a few beers before I made my can selections. Great selection including ultra fresh Captain's Daughter.

Stopped in on the way to Newport. They have recently changed how they do things, so here is an update. They now have two locations next door to each other. One is where they sell beer to go, the other is a bar-like taproom. In the beer to go they offer 32oz and 64oz Growlers and decent selection of their brews to choose from, they also started selling cans on site usually Captain's Daughter and one or two other brews. Their taproom has about 10 of their beers available for a glass or 4-beer flight, they also have guest beers on tap which are not available for flight. The taproom has about three rooms to sit plus an outdoor Beer Garden, which was pretty nice. The were friendly and the service was quick. The beers were average with the exception of Captain's Daughter which was quite amazing.
Overall a nice place to stop for some good craft beers and beer atmosphere.

Stopped here because I had tried their Captain's Daughter at home and thought it was impressive so I wanted to see what else they had to offer. The place is pretty tiny, just some standing room but not much more. The service was good, the selection wasn't bad either. The place had a very odd aroma to it... kinda smelled like shit honestly, I'm not sure if it's from spent grains they needed to discard of or what but I have to say I was happy to get outta there after trying the beers. Hopefully whatever the issue was is resolved.

Seems there's mostly locals here (gotten pretty popular thanks to Captain's Daughter), but the beers are overall really good to excellent, the service is excellent and they have a decent amount of choices. Definitely recommended.

I love Grey Sail. The room is small but the large windows make it feel bright and welcoming. And the beers are good. I've stopped in for tastings ($5 for a pint glass and 5 samples) and growler fills and had a good time getting just what I wanted. This is a must stop if you are passing through and especially if you are local.

Cool old re-purposed building with open view of the brewing area. 8 beers on tap, knowledgeable and helpful staff...very enjoyable time. There is a recently opened, additional, tasting room located 100 yards to the left of the original brewery building with small service bar.