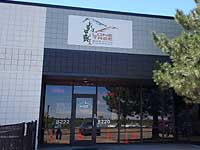 Brewery in an industrial building with an L-ish-shaped bar that seats about 25 and numerous tables about the floor and nice patio area out front. A dozen beers on tap, the two I had were somewhat run-of-the-mill but good.

Pretty nice spot just down the road from my work.

Vibe is converted industrial. Nothing really special inside, but nice enough, open, with a large bar, and small outdoor seating area as well. There is almost always a food truck parked out front too.

Quality is above average, I've been here a handful of times and enjoyed everything I've tried, but I haven't found anything that I would consider to be "great". Selection tends to be good, with around a dozen beers, haven't really seen anything overly exciting or interesting though.

Service is pretty solid and standard. Quick enough, pleasant, but not overly friendly or talkative. This might have something to do with the fact that this place has always been pretty busy when I have visited.

Maybe not a glowing review, but this is a place I enjoy visiting.

My wife and I were frequent customers there until I came there for my birthday in May... while we were outside with the other dog/family people a very rude group of (trashy) people came in and took over all the outside seating. They took all the chairs at our table, then proceeded to drag a table across my foot and 2 of their party sat down at my table inches from my wife and stared at us, clearly wanting us to leave. When I asked them to be more considerate, They then started calling me names until my wife and I got up and left- basically the last of the remaining outdoor patrons to do so.

We asked the staff to intervene but they refused, as a larger party spend more $$$. Sure, there was a lot of apology, but no action.

Basically in a family friendly place, either the staff stands up for the patrons, or the patrons stand up for themselves. In which case it becomes a biker bar. Which is what this place is, now, in my view. Don't go there unless you are ready to deal with violence and rudeness.

If you want to be physically threatened and personally insulted for your outdoor table, go here. A great place for testosterone muscle bound a holes. Not a good place for family and dog people.

They have a number of food trucks that setup out front. Today Douglas County Library is having a brew tour event and a food truck is here. Place is packed. Great vibe.

A comfortable setting, great, consistent beers and a staff that loves to take care of you.

my first trip to lone tree was a good one, although i had hoped they would have more interesting taproom only beers. instead its just the basic lineup with one or two exceptions, the stuff you see around town mostly, but a hoppy wheat they called kitchen sink, which was great, and some barreled stout i did not try as the new ones. the space is large, and packed on a thursday night. they were hosting trivia and it was loud and hopping inside. a forest of fermenters in the back. nice outdoor area was our saving grace, more quiet and pleasant out there, and a very good food truck serving up sloppy joes and such. service was frustrating. they seemed bored, overwhelmed, and unenthusiastic, surprising since the mood was light and fun around the joint. the beers here are all decent, but nothing ever stands out to me as being extremely good. a good place to hit on the way to somewhere else, but it feels a bit like most other larger taprooms. looks to be profitable though, the place was packed and people were drinking.

Got out of court unexpectedly early (Arapahoe County, located conveniently next to the Broncos practice facility) and headed over to where I thought the brewery might be. Turned out I was wrong and because I couldn't see the mountains thanks to this damned forest fire, later figured out I was going south on Yosemite when I thought I was going east on Park Meadows Drive, or something, but ultimately figured it out.

I sampled 5 beers, all of which were well made, tasty, and without flaw. I had the Helles, the Belgian Blonde, the Irish Red, the Pale, and the IIPA. I think I read a "meh, nothing special" review here, and I couldn't disagree more strongly. I think it takes a very good brewer to make a good Helles, and if this one was served to you by the guys at Prost, generally accepted to be lager mavens, you wouldn't think anything amiss. The Belgian was right on point, with crisp clean pilsener malt, floral hop presence, and a good Belgian yeasty character. I'm not a fan of Irish Reds butr this one hit the combination of malty, slightly roasty but not overpowering roastiness, and subdued hop presence, withouth the diacetyl which I don't believe is a flaw in this style but which I do not like.

Bartender (Josh), also an assistant brewer, asked which one I liked the best and I told him, I liked everything and I hate to pick a blah choice, but the american pale ale was excellent.

Finally I'm not sure the IIPA qualifies as an IIPA, more like a tweener between an IPA and a double, buit it was also an excellent beer.

I'll admit there wasn't an oak-aged bretted up saison, or a bourbon barrel RIS, in the lot, and if that makes them "meh" then so be it. But these weren't good beers, they were great beers. There's something to be said for competent professionalism amid all the, I guess, inspired amateurism at work in Denver's small micro and nano scene right now.

Lone Tree Brewing is located in a small strip-mall at the South end of the Denver Metro area. It's a little tough to find, but worth the effort.

The brewery is pretty simple inside. There's a good sized bar to one side and tables with chairs on the other. A couple of TVs had sports on when I was there. A long half-wall is all that separates the brewing area from the seats.

The weeknight crowd was small, but seemed to pretty loyal. The bartender was quite nice. All in all, this is a nice little tap room.

Great new place to just go and have a beer. No food served. Located in convenient Lone Tree. Great atmosphere, young and old mix, open viewing of brewing equipment. 8 different beers brewed on site. Great selection and bar tenders. Food trucks outside. Board lists ABV and IBUs - so you know what you are getting. Lots of new crazy beers popping up all the time. Acres 0 Green Irish Red is great, Mountain Momma Helles is a great light beer with good flavor at the end. The Ariadnes Belgian is very easy drinking as well. I'm almost tempted to try the Toots Oatmeal Stout - wish I liked dark flavored beers.

A brewery on the south end of town? Nice. Other than Potts and RB, this is really the only major brewery between SW Denver and Parker/Castle Rock.
When you walk in, you’ll find that it’s pretty spacious with a massive L-shaped bar (20 seats?) and about 15 or so tables. There are a few TV’s and a popcorn machine, too. All of the brewing equipment is visible in the back, and it looks like they have plenty of room to expand either the brewing area, the tasting room, or both. Like many other breweries, there’s no food, but you can bring your own or get it delivered.
It reminds me a little of both the older and newer versions of Dry Dock, which is never a bad thing. Not a place you'd probably want to hang out if you weren't having a few beers, but it's a shining beacon compared to the rest of Lone Tree.
They had a whopping 8 beers when I arrived, and one more had just run out. They had a weiss, helles, blonde, pils, alt, Irish red, APA, DIPA, and they just ran out of a stout. Quite the tasting line-up. I went with a sampler of all eight, which is a serious undertaking considering the large samples. I’m picky when it comes to German styles and I didn’t really care for the weiss (it was a bit bland), but the alt and pils were tasty. The helles was hazy and not much to look at, BUT tasted just fine. The blonde didn’t really do it for me, but the Irish red was excellent – one of the best of the season. The two hoppy beers were solid, too. No oniony-dank nonsense that seems to be popular at the moment. The main thing that should be pointed out is that there were no technical issues that plague many new breweries. No diacetyl, DMS, off flavors, etc.
Overall, a pretty nice place in an area that really needed something like this. It was pretty crowded on a random Saturday afternoon and I can imagine it must be a madhouse in the evening.
A smart location and solid beers should spell success for the LTBC. I'm a firm believer that when a new brewery opens with no technical issues then the sky is the limit. That could be the case here.