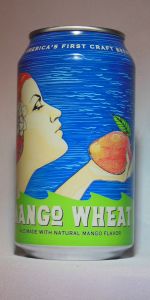 Notes: We are excited to present our refreshingly unique craft-brew, Anchor’s Mango Wheat™; an ale made with sunripened mangoes. Mangoes (Mangifera indica) are native to southern Asia, but Californians have enjoyed fresh mangoes since the 1850s. In 1857, Wide West reported that the mango “is at once the richest and most delicate of all fruits, and all other fruits are comparatively insipid beside its intensity of taste. There is something in it which is nothing less than voluptuous.” Anchor’s Mango Wheat is a crisply refreshing, effervescent, golden ale that highlights the delectable character of this singular fruit: Brightness without sharpness, fullness of flavor without heaviness, tropical aroma without pungency, and complexity without cacophony.
View: More Beers
Recent ratings and reviews. | Log in to view more ratings + sorting options.

Reviewed by JayDubTrub from California

A nice, fruity session vibe; I'd have another, especially on a hot summer day.

Reviewed by MKV from Belgium

3.85/5  rDev +9.1%
look: 4 | smell: 4 | taste: 3.75 | feel: 3.5 | overall: 4
I am kind of disappointed with this one, actually the first one from Anchor that was sort of a letdown. Not for the quality of course as they are making superb stuff but for this mango thing. I love mangoes but this one is mango "flavored." Claims to be naturally though but its still kimd of cheesy, kind of like candleway, a bit artificial. I would prefer mango in my juice not in my beer - or if in my brew then I'd rather put it in the wort as like Sierra did it with blood oranges, which was cool. Next I will have their Blood Orange Golden Ale, let's see how stoked it can be.
May 17, 2018
Rated: 4.05 by HaoleBoy from California

Mango aroma is intense enough that I can smell it at arm's length. It's very rounded and smooth and organic-seeming. Not much by way of wheat beer complexities but the fruit is nice enough to carry the aroma by itself.

Tastes surprisingly complex, beery, and good. The aforementioned mango nodes fill the beginning of the sip, but they move quickly into bready and yeasty wheat beer flavors and end with some peppery wheatmalt. The mango colors all of the beer, yes, but it does not blot out it's beeriness. And, unlike most (lesser) fruited wheat beers, this one is full bodied and the flavor doesn't drop off at the end. It's a fruited beer that... gasp... is made for people who actually like beer!

I was really surprised to see this on the shelf. Not only is it out of character for Anchor, but its branding breaks radically with their core lineup. Other brewers might have created some kind of fake subsidiary to distribute it. Anchor is proud of their product, though, and they damn well should be. It's excellently brewed.

3.23/5  rDev -8.5%
look: 3.75 | smell: 3.75 | taste: 3 | feel: 3 | overall: 3
Poured into a becher pint glass, the appearance was a glossy burnt yellow to soft orange color with a finger's worth of white foamy head that slid off at a moderate pace. Not much lace.
The aroma had some sweet mango puree' pulling in some sweet wheat and sweet grass.
The flavor was all about the mango and coming across in a semi-sticky manner in the aftertaste.
The mouthfeel was between light and medium bodied with a fair sessionability about it. Carbonation felt fine. ABV felt appropriate. Some cloying effects show their presence along my tongue.
Overall, I like the aroma the best about this. but it needs more balance in the flavor (a little more wheat would help pull down that overly sweet portion). Cloying part doesn't help either.

Rated by Katekaul from Illinois

L: It's a brassy gold pour with a slight haze, streams of rapidly rising bubble and a 1" white foam cap with moderate retention.

F: It has a medium body and medium high carbonation.

O: This is refreshing beer with an interesting blend of flavors.

Reviewed by theBubba from New York