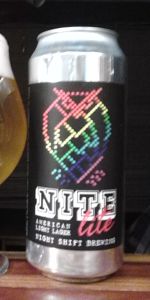 Notes: It's time to rethink light beer. Right now there's too much overlap - bland flavors, redundant branding, macro-brewery after macro-brewery. You deserve better than this sea of sameness, and Nite Lite is our way to raise the light beer standard. An unfiltered, unpasteurized, all natural, craft light lager that everyone can get excited about.

Perfect for BBQs, tailgating before the game, hanging at the beach, enjoying a concert... you know the drill. Nite Lite is simple - light bodied and crisp - just as a light beer should be.

Pale body with a thin white cap. Corn in the nose. Definitely tastes like a “lite” beer. Not my thing…

What can you really say about a light lager? Sometimes you're just in the mood for something easy drinking to go with lunch, and that's where they shine the most. I've only reviewed a few, and find them rather hard to pin down flavors. I had Lime Lite already, which is just this with lime, so I'm assuming it'll be comparable

The taste starts off with a nice lemon tang, grain, and general hops, not overly bitter. The swallow amps up the grassy and floral hops along with a honey like sweetness and some crackery malt

A very light body pairs with moderate carbonation for a very clean drinking lager, goes down very easy. Finish is crisp and dry as expected, with just a touch of sweetness

Yeah, just as I thought this is Lime Lite with less citrus. Equally good if not better, especially for pairing with food, whereas I think Lime Lite can hold up better on its own

Rated by FishyBeer3 from Massachusetts

Reviewed by AlltheBacon from Massachusetts

Nearly crystal clear, ultra pale straw yellow appearance. This looked like your typical macro larger. The body was topped by an inch-tall, tight and creamy, bright white head that quickly dropped to a medium sized collar. No lacing whatsoever.

A crisp, dry, powdery yeasty quality dominated the aroma initially. As the head receded, pale, pilsner malt notes appeared. Somewhat grainy with a touch of sulfur. There was a hint of lemony brightness too.

The flavor profile was cleaner and more interesting than the nose. Crackery malts led things off on the front end. Touch of raw grain and wheatiness. Bright lemon notes came through strong as the beer moved along the palate. Bit of sulfur on the back end. The beer finished with more lemony tartness and just a touch of earthy hop bitterness.

Excellent fluffy, lighter bodied mouthfeel. Pillowy soft and smooth on the palate. The liquid contained a super fine, fairly zippy effervescence that was spot-on for a beer of this style.

I usually have certain expectations for “craft” beers, so this one threw me for a loop initially. All things considered, however, Night Lite drank a lot cleaner than a typical macro and was as quite refreshing. At $5.99 a four pack, there is probably no better option at this price point.

Reviewed by VTbrewfan from New Hampshire

Reviewed by headlessparrot from Canada (ON)

2.69/5  rDev -25.5%
look: 3 | smell: 2.75 | taste: 2.5 | feel: 3 | overall: 2.75
I am not giving this beer a negative review because of the style--I'm actually a sucker for a well-made light lager or mainstream American adjunct like 'Gansett or Hamm's--but because I genuinely think it's pretty mediocre. I'd truly prefer a Miller Lite. Hazy pale gold, very crackery, light bitter aftertaste, but there's that underfermented grassy granny apple/apple core flavour that just lingers here. Can't recommend it.
Sep 18, 2019

Rated by Skywave from Oklahoma

Reviewed by Wapes from Massachusetts

Mostly clear straw golden color with slight haze. The fluffy head is 2 fingers and recedes to 1, with sparse lacing up the sides.

Feel is crisp and starchy, has a semi-creaminess, medium to light bodied. Drying finish with remaining starches.

3.7/5  rDev +2.5%
look: 3.5 | smell: 4 | taste: 3.5 | feel: 3.75 | overall: 3.75
Pours a honey-yellow with a transparency clear enough to read the beer label. Head is a finger of white foam, that is more fizz and does not retain well. Aroma is straw, sweet corn and bready and biscuity malts. Flavor profile is straw, sweet and creamed corn and nutty, bready, biscuity malts. Creamed corn comes on strong, a sign of potential DMS, which is fair with this sort of beer. It may be a touch strong for some. Mouth feel is lightly fuzzy with a stilling texture, almost like well-worn movie-theater carpet, where years of walkers have beat down the once luscious, velvety texture. It has a thin consistency. Overall, light and refreshing, with a little more sweetness than is typical for an AAL. Nice little brew.