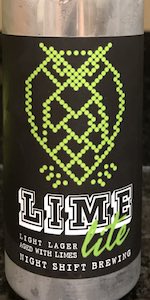 Notes: Macro light beers with subpar flavors have owned the light beer space for too long, help us raise the bar and compete against big beer on their own turf! At 4.3% ABV and 120 calories per serving, Lime Lite features natural lime in its recipe. Like Nite Lite, Lime Lite is unfiltered, unpasteurized, and preservative-free. It sips super refreshing and crisp, with a hint of lime citrus.
View: Beers | Place Reviews
Reviews: 9 | Ratings: 27 | Log in to view all ratings and sort

Mostly an adjuncty nose, corn and lime lead. A bit of malt and some salinity

Light in flavor without feeling bland, mostly just your average lager yeast with lime darting across the palate throughout the sip

More creamy in feel than I would've expected, but that's what makes this stuff great. Light bodied, moderate carbonation in conjunction with the light citrus makes this finish mostly clean and a bit sticky

Even for an 8+ month old can, this was pretty great. I certainly know where I'll be turning to for beer that'll please all of my friends

Effervescent body, clean and crisp. First thought was a lager but the lemon lime/7up taste is throwing me. Gose? No salinity. Golden ale with citrus zest? Possibly but a nice clean finish leads me to say no. Going with a lager here, very light in alcohol. Honestly, I would not be surprised if this was one of those NA craft beers.

This would be killer in the summer.

S - wet grains and hay, lime is not overpowering

A: Pours a fizzy yellow color with 2 fingers of head that fades down to a thin ring of lace

S: Light lime along with some cereal grains and barley. Very simple

T: Follows the nose. Starts off with a mix of lime, grain, and a bit of malt sweetness. Finishes with lingering lime and sweet cereal grain

O: A solid light lager than is super easy to drink. The lime is definitely not overpowering. Check it out

A: The beer is crystal clear light yellow in color and has a light to moderate amount of visible carbonation. It poured with a quarter finger high white head that quickly settled down, leaving a thin patch of bubbles on the surface and a narrow collar around the edge of the glass.
S: Light aromas of limes are present in the nose.
T: The taste follows the smell and has light to moderate flavors of limes with hints of pale malts towards the finish. There is an ever so slight amount of bitterness.
M: It feels light-bodied on the palate with a moderate amount of carbonation.
O: This beer is very light and refreshing and doesn't taste like something that has been watered down. The taste seems to have just the right amount of lime in it.

On tap. A fun beer. Light lager with lime flavor that is just the right setting. Not too flavored. Like a Bud Light Lime with a little more emphasis on flavor and aroma.

A: Pale golden yellow - clear, but maybe not as clear as Nite Lite - pours with a small, white head, fades to a few wisps of a cap, leaves minimal lacing

S: Nice amount of lime - fresh-squeezed lime and lime rind - it's not so much that the lime aroma is super potent, but it's particularly apparent because Nite Lite is just so very mild - light grains, light bread, some cereal, crackers - hint of lager yeast, some light spice - some light sweetness

T: Pale grains, light bread, crackers, maybe a touch of toast - very mild base - lime flesh, juice, and zest really shine - as the aroma suggests, there is a nice amount of lime without being excessive - the citrus works very well - touches of lager yeast, hints of spice - low amount of sweetness, maybe even lower than Nite Lite, finishes super clean

O: Have you ever wondered what Bud Light Lime was supposed to taste like?

Lime plus light lager has equaled massive profits for the big guys, so a craft version makes sense. Much like Nite Lite, Night Shift deserves props simply for attempting a style that most brewers would not touch with a ten foot stick... errr... ten foot mash paddle. If this is ever brewed again, it's really worth trying.

Lime Lite from Night Shift Brewing
Beer rating: 75 out of 100 with 27 ratings