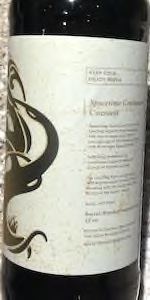 Notes: Spacetime Continuum Coconut is a blended Imperial Stout featuring 34% barrel-aged stout with an average age of 18 months blended with Truth base Imperial Stout. Following the blend it is conditioned upon hundreds and hundreds of pounds of toasted coconut.

The resulting beer is magnificent, with rich and sweet coconut flavors blending with the Tootsie-Roll-like flavors of the blend. The coconut character is super well-integrated, and while it does not overwhelm, it lets its sweet, creamy presence be known throughout the glass. As it warms it reveals waves of complexity with notes of sweet baker’s chocolate, uncut bourbon, dark caramel candy, and milky coconut. It is a phenomenal treat! Savor, and enjoy!

if it werent for the lingering tinniness...

L - finally starting to see some fruits of the TH barrel program's labor. Pours a thick blackness with minimal head, even when poured vigorously. Motor oil.

S - bright, playful caramel character, accentuated by the coconut. I know it's bourbon, but it almost smells like rum. The aroma is beautifully blended together to create a seamless smelling sensation. It's almost like this is a brand new aroma. Nicely done.

T - warming bourbon and brown sugar sweetness. Toasted coconut shavings, acidic coffee roast, and dark chocolate cherry candy. First impression doesn't hit as hard as the nose. Whereas the aromas are one continuous, artfully-crafted blend, the flavor isn't quite as integrated. The flavors come through separately and while good, lack the wow factor I got out of the nose. Cane sugar, rum barrel, and dark fruits, much like a barleywine. Oaky vanilla adds some levity just before the boozy warmth rolls in, leaving my mouth hot and tingly.

F - marshmallowy, but thinner than expected. Certainly as sticky as you'd expect a 12% adjunct stout to be.

O - as always, TH does an excellent job with restraint. It's easy for adjuncts to overpower, but the coconut is carefully added in a way that doesn't seem fake or overbearing, something that isn't hard to do with coconut. Definitely tastes like a stout first and coconut after. That initial disappointment in the taste disappears quickly; this is a tasty and invigorating stout.

Thick, glossy, pitch black appearance. The oily looking body was topped by a small film of saddle brown bubbles that quickly transformed into a medium sized collar. A few tiny streaks and dots of lacing stuck along the glass.

The flavor profile was also rather disappointing initially. Roasted malts and big boozy notes dominated from the start. Brown sugar came through in the center. More boozy bourbon on the back end and the finish. As the beer warmed, some vanilla and toasted coconut notes appeared. More sweetness too. With time, the coconut became punchier.

The mouthfeel was medium bodied for the style. Somewhat thinner than I anticipated. The liquid contained a fizzy, greater-than-average effervescence that turned light and fluffy on the palate. After a few sips, the sugars in the beer deposited a sticky film on my lips. With time, the carbonation settled down and the liquid felt fuller bodied and creamier.

Spacetime Continuum - Coconut was probably the most disappointing Tree House pastry stout I have ever tried. The coconut was quite subtle, the barrel notes were somewhat harsh and the mouthfeel was fairly thin. If this were a commonly accessible shelfie, I might not be so critical of this beer.

No bottling info on the bottle, tasted 1/14/2021. I'm not a huge coconut fan, but this was a really well-made stout. Tons of coconut in the smell, which was probably the highlight. The mouthfeel and taste were excellent as well - super smooth and the leathery bourbon and boozy heat was balanced by sweetness from a touch of chocolate, some dark cherry, and lots of coconut. I would have loved a bit more carbonation, but know that's not typical of a barrel-aged stout like this. Overall, definitely worth trying, especially if you're a coconut fiend.

12oz bottle thanks to IMN0P.
Pours pitch black with no head at all.
Coconut dominates the aroma with some dark chocolate and bourbon notes.
Taste follows the nose but more balanced than the aroma. The sweetness of dark cherries comes through.
Full body, definitely a sipper.
If you like coconut as much as I do, this is a stout to try!

Aroma is great, and that’s coming from
Someone who only enjoys coconut in BA imp. stouts.

Taste is a bit boozy, but I’m into that kind of toeing the line between beer and bourbon.

Thanks Dad for the gift.

A- 12oz bottle goes into a tulip with a pitch black body and a dark cocoa brown head. The head is a finger high with a thick and creamy texture but falls down to a small ring after only a few moments. Lacing comes down to a few small sheets and spottiness.

S- The hundreds and hundreds of pounds of coconut are very much in charge of this aroma with classic toasted coconut saturating the nostrils. Beyond the coconut are notes of fudge, chocolate, roast grains and hints of Bourbon barrel, but that is pretty secondary to be honest.

T- Coconut once again rules them all but there are some nice complexities to the flavor that weren't quite as present as what was found in the aroma. The barrel for one is stronger and it has a spicy Bourbon note as well as a hint of woody oak. Caramel comes in stronger alongside the coconut and overall it is of moderate sweetness. Vanilla desserts come to mind with roast barley, brown sugar, a touch of booze and as another reviewer mentioned cinnamon comes to mind. As time goes on a tiny bit of dark fruits like dried black cherry comes out.

MF- Heavy bodied with a syrupy, oily slickness but that is not to say the beer is overly sweet. The texture of this brew is creamy and silky and mouthfeel is somewhere Tree House always seems to nail. Ends very warm from the booze but

The coconut is definitely strong here but the flavor finds a nice balance between a spicy barrel and the roast grains joining that coconut. Thankfully not overly sweet as the booze cuts into the sugars quite a bit accentuating those spicy whiskey notes and the toastiness of the coconut.

Picked-up a single twelve ounce bottle at the Tree House Brewery in Charlton for $9.50. My one hundred and nineteenth brew from these guys. This tastes pretty good, but is super boozy.

My first imperial stout from these guys. I can imagine it will be hard to live up to some of the milk stouts I've had from them but I'm sure it'll be good. Went up to Tree House yesterday and got this in addition to my mixed case, splitting with my dad

The coconut is definitely prevalent in the aroma, but not overpowering. Some sweet coconut, cocoa powder, oaky bourbon, vanilla creme, and light roasty coffee

For the delicious aroma, sadly the taste doesn't quite live up. Starts off with a nice boozy heat, rich caramel, and milk chocolate. The swallow brings dry oak, coconut, and a touch of spicy rye. I wouldn't be surprised if the barrels used here housed a rye whiskey

A nice full body with the only carbonation coming from the alcoholic tingle, for a smooth and decadent drink. Finishes surprisingly dry for a beer of its heft, not being overly sweet

While probably one of the worst beers I've had from them, that's not saying much at all. It was a wonderful treat for the night, full bodied and rich with a great boozy complexion. Cheers BA, happy Thanksgiving!

From a 12oz bottle, undated, purchased at the brewery 11/19/20. Served in a rather fancy LTM-branded goblet, or maybe it’s a tulip. I guess I’m not sure which.

Pours utterly black and impenetrable with a feeble little head that doesn’t last long enough to really get much of a look at. There is a creamy, sort of pumpkin-colour collar and a rouseable thin, slippery curtain of lacing.

A rich, robust nose of boozy barrel and coconut husks. A little... fudgy, as well.

Initial taste impression is of handfuls of white granulated sugar, straight from the bag - which is odd because, on reflection, it isn’t all that overwhelmingly sweet. In fact, similar to the nose, the coconut character comes across more as the husk-y, woody outside rather than the sweeter inside which, I’m guessing, owes something to the barrel. There’s a fudginess and a taste reminiscent of RedHots candy, a cinnamon-like flavour defined and accentuated by the little bit of detectable heat from the booze.

Feel is thick and dense nudging up to but not quite crossing the line into being syrupy. Hefty bodied with gentle, barely adequate carbonation - a few more bubbles would have helped the last of the glass go down a bit more readily.

There is a detailed, three paragraph-long description of the beer on the label but the print is so fucking small that I have no christly idea what it says. I am not a big fan of sweet, syrupy stouts - which is, in fact, what nearly all TH stouts are - so I was pleasantly surprised that Spacetime Continuum Coconut was only almost-but-not-quite unbearably sweet and syrupy.


4.34 by PhineasMcClintock from Massachusetts on Nov 16, 2020
Spacetime Continuum - Coconut from Tree House Brewing Company
Beer rating: 94 out of 100 with 41 ratings