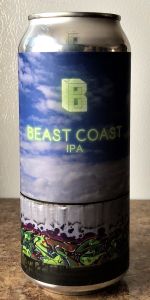 6/29/18 canning pours an opaque medium golden orange color with two fingers of ivory foam on top... Only a very mild sweetness, suggesting muted fruit impressions like oranges and grapefruit, but with a nice dry pithiness, and an herbal pine element that really airs it out... Smooth and soft, medium-light feel... Not even as fresh as I'd normally like for a new IPA, and this is really good... Features Simcoe, Cashmere, and Vic Secret hops...

Guess this hasn’t been around for a couple years, but it just saw a recent canning run a few weeks ago! Fresh beer from one of Maine’s unsung tiny breweries is always a nice thing to see in stores, but is it good?

Pours a turbid deep orange color with almost butterscotch-like overtones... kinda between a light and medium amber when held to light. Definitely darker than I assumed it’d be, but that’s not a bad thing. Solid fluffy head of densely-packed white bubbles that leave behind nice tiered lace as it fades to like a half-finger. A huge island of foam floats in the center of my glass, as well. Some yeast/hop chunkies are evident as I pour the whole can into my glass, but they pretty much entirely sink to the bottom rather than stay in suspension.

The nose here is herbal and grassy with a dank overtone and hints of passion fruit and starfruit. Some light citrus wafts up at times as well; somewhat reminds me of ruby-red grapefruit rind. Overall, it’s a decent enough nose but it doesn’t really leap out of the glass like some of these guys’ other recent hoppy ales seem to.

On the tongue, this is fairly punchy and vibrant with a lot of pine, grapefruit, tangerine and passion fruit. Surprising maltiness in the mid-palate with some biscuity heft and doughiness rounding out the intense hop profile. This is oily and viscous, with some complex flavors that remind me a bit of a bigger IPA than something clocking in at 6.5%. That said, since the nose is a little lacking, some of the elements they probably wanted to push given the interesting hop bill (Simcoe/Cashmere/Vic Secret) get a little lose among the maltiness. It’s a tough balance, and they did have kind of an uphill battle here to get this to work well, and it works decently but not incredibly. It’s just a bit too muted for its own good.

The feel is chewy and a bit more viscous than I’d like for a non-imperial IPA. Carbonation settles at a rather creamy and moderated point on the “flat-to-champagne” spectrum, and the finish is mildly oilier than usual and a bit drawn-out. I wanted a little more from this one; it’s not the best of the recent rash of interesting IPAs I’ve had from Bunker, but it’s solid enough.