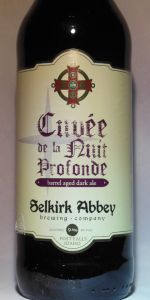 Bottle picked up at the COOP for a pretty pricey $18ish... but I am damn happy I did get one... Need to get another!! Pours mostly clear walnut with a decent khaki head... monstrously complex ... makes me think of raisin and vanilla, vinous notes and sweet plums.. figs and brown sugar on the finish... Something I associate with brandy?? Wow... Just wow.. This one proves that not every beer needs to be in a "style guide"... This one is special.

Poured into a Gulden Draak tulip. Pours a very dark red-orange with a thin, light khaki head that dissipates to patches leaving light lacing. Aroma of whiskey, fresh and dried dark stone fruit, vanilla, oak, clove and earthy spices; smells quite nice. Flavor is dark stone fruit, vanilla, oak, Selkirk's fruity Belgian yeast, hints of red wine and cherries. Medium bodied with light creaminess. The flavor of this is almost impossible to describe, deeply fruity and rich with excellent light barrel notes. Flavors like a dubbel distilled down to intense base components. Sweet, but not cloying and with enough flavor to support the sweetness. The house yeast strain interacts with the other flavors to produce an excellent Belgian fruit based strong ale. There are a lot of disparate flavors here that somehow come together into a nicely integrated, unusual dark ale. Unlike anything else I've tasted. Alcohol Is dangerously well covered. I really like this a lot.

22oz waxed bottle purchased at Huckleberry’s in Spokane for $17.99. I was able to try this on draft at Selkirk Abbey’s tasting room, but this was the first (and possibly only) time I encountered it in bottled form. According to the owner/head brewer Jeff Whitman, this is a blend of barrels of 8°, 10° and Guilt, and he doesn’t think it will age any better than it already has, and he isn't sure he can duplicate it exactly for another release, so "drink up and fucking enjoy it" seems the order of the day. The name, incidentally, means “Blend of the Deep Night,” according to the brewery.

Pouring into a big, St. Bernardus stemmed glass, this had a dark, brownish amber color to it. Once in the glass, it was more of a very dark, almost black color, with a tiniest bit of mahogany around the edges when held up to light. Initially, there was a half inch or so of beige colored foam, but said head dropped down to a foamy collar within about 15 seconds (though could be very briefly reproduced by twirling the glass).

Boozey, winey, woodsy aromas to start with. Some vanilla notes soon emerged. Weirdly, I picked up something like peppermint as well. There’s also some fruity and spicy Belgian yeast esters that emerge as the beer warms.

The taste is very complex. It’s a mixture of many different elements, all of which seem randomly strung together yet meld exquisitely well together. I detect the taste of red wine, whiskey, pipe tobacco, cocoa, vanilla, dark fruits. There’s a ton of different things going on in this beer, but they meld together fantastically. As it warms, the booziness creeps up, with a warming alcohol sensation that crowds in to the other aspects above but doesn’t push them aside.

Like many a Belgian Dark Ale, this has a lighter body than one might expect for what it tastes like, but perhaps not as light as some of the greats of the style. Lightly creamy mouthfeel.

This is an amazing beer. Barrel aged Belgian Dark Ale doesn’t come close to describing it – it needs its own special style name, maybe “Belgian inspired Ambrosianal Ale blended with Unicorn tears of joy”. It’s a fantastic night cap beer. I bought two – one for myself and one for someone else. I now realize the error of my ways and will try to pick up a couple more at least, and maybe will lay one down despite Jeff’s warning that it’s not meant to be aged. I desperately hope that he is able to somehow duplicate this beer. Stop at nothing to get this, unless the crime you wind up committing will lead to such quick incarceration that you won’t have time to drink it.

Still with a weak little ring of foam, color is clear caramel brown.

Drinkability is pretty high, this is super tasty, maybe a little still and sugary to really tear into, but so smooth. Served initially, I put the 2nd half of the bomber in the fridge while I worked on the first, and liked it a touch colder, gave it some snap.

Poured from waxed bomber into my Selkirk Abbey tulip.

Appearance: rich dark amber hue with a little bit of haze and a finger of creamy tan foam atop. Very attractive indeed.

Smell: sweet with lots of rich, dark fruit character: raisin, figs and even a little tobacco. There is a little vinous element here but it just plays a nice subtle counterpoint to the other flavors. Wonderful.

Taste: rich, sweet, dark; caramel and toffee along with the figs, dates and tobacco. It might have aged out of some of its subtler elements, but this is one smooth and complex brew.

Overall: I like this beer a great deal. I only hope they make it (or something like it) again.

On tap @ Homestead Bar & Grill, Meridian ID. This one surprised me...

A: Murky brown with an off-white head.

T: Follows the nose, complex...and not entirely Belgian? The barrel character is moderate, the malts shine, the dark fruits pop in and out but don't overwhelm. This is well integrated.

O: I really like this one a lot, this is one I could see putting Selkirk Abbey on the map nationally.

Appearance is a slightly cloudy brown with slight head and little carbination. Very mild pleasant plum and other fruits. Taste is a very pleasant clean plum and fruit taste with little hint of alcohol.