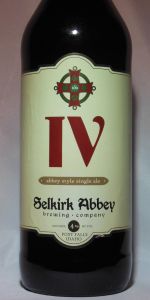 Poured from 22oz bomber into a tulip.

Appearance: rich red-brown hue with virtually no haze and a big effervescence. Head is a finger of fizzy tan foam; it's a bit darker than a typical example of the style, but I still like it.

Smell: light and sweet with a dash of toastiness and a hint of pear character. It's a bit light, but it's nice.

Taste: toasty, sweet and just a little bit phenolic. It's hard to get a ton of flavor into a beer this light in alcohol, but there is definitely some interesting stuff going on here.

Mouthfeel: light body with a big carbonation and a nice creaminess despite the lightness.

Overall: this is definitely a super drinkable beer, given the good flavor and low ABV. It was brewed primarily to sell in the Utah market, but I think it has a lot of appeal even without this constraint. Definitely worth checking out.

22oz bottle purchased at the brewery for $2. Apparently this was brewed for the Utah market, since those goofy Utah alcohol laws don’t allow for widely distributed bottled beers beyond 4% alcohol. Selkirk main-man Jeff Whitman has since reformatted the recipe for this “Belgian Single Ale” and wants the bottles of the previous recipe gone, hence the low price. I had it on tap at the brewery when first released, and found it very drinkable.

Poured into an Iron Goat snifter, this was a clear, dark amber color, with a moderate-sized off-white head. Said head dropped fairly quickly, but was easily agitated back to life. Spotty lace. Really good clarity to this.

Surprisingly malty nose to this, along with spicy, Belgian yeast notes.

This tastes like a low-amplitude amber ale, but brewed with a Belgian yeast. Sweet, bready maltiness is the overriding taste sensation, with tea and apple notes, a backdrop of spicy, fruity Belgian yeast notes, and a mild dryness at the swallow.

This is where this falls short, with a body that seems a little heavy for something 4%. It’s worth noting that when I had this on-tap at the brewery, it seemed lighter bodied.

Not a bad low-abv beer, but a little heavy in the mouthfeel department. 12oz might have been a better way to showcase this beer, as at 22oz, it’s a bit of a chore to drink, espite it’s low strength. Perhaps this is the aspect that was found lacking by the owner/head brewer and required a re-formulation. I’ll try this again when I know it’s a bottle of the newer version and compare notes.

Poured into a Great Divide tulip. Pours a medium coppery amber with a tin white head that dissipates to patches. Aroma of mild biscuit and bready malt, Belgian yeast, tea, apple juice, slightly spicy. Flavor is light spicy fruit; light stone fruit and apple family juice, Selkirk Belgian yeast, hint of caramel, clove. Finishes with a light clove and hop bitterness. Medium bodied with sharp carbonation. Wow, although this is clearly milder than Selkirk's standard Belgian ales, it has great flavor for a small ale. The fine fruity flavor of Selkirk's yeast is fully on display here, with a deft touch of spice and pleasant Belgian style malt body. This is a recreation of the smaller ABV ales the monk's brewed for daily consumption and frankly if this is what they got, they were very lucky monks indeed. Nicely done for a rare session Belgian.

Appearance is a reddish copper with good clarity. No head, no lacing. Aroma is fruity with definite pear notes. Taste is malt, fruit, and Belgian yeast. Body is thin with fairly high carbonation.