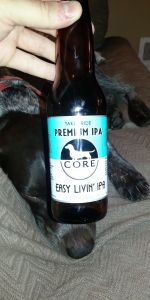 Hops followed by a grainy/wheat taste. Aftertaste is sub-par

Taste Rating in Words: It's the meal your significant other really enjoys making, that could be better, but you can't be the one that breaks it to them.

not a bad session ipa, but like their pils, i found this one to be a touch under flavored. perfect in hot weather where you need a beer to drink fast from the can, hoppy refreshment, this works really well in that context. however, it lacks the textures and intense hoppy character of good ipa, and falls to me somewhere in the pale ale range in terms of overall hop levels. helps make the beer very drinkable, but its less of an ipa as we generally conceive them. the grain base is light but not without some unique character, maybe my favorite feature of the beer on the whole. some breadiness, crackery and dry though, and a nice platform for what hops are present. very refreshing with high carbonation, low alcohol, and a much lighter than medium body. its fun and carefree beer, and i like that. havent been to arkansas, but i can imagine this on a humid summer day being really really awesome ice cold.

Had this on tap at a NWA taproom. Was not impressed. Lacking in character, light on flavor.

Had this beer on tap in the Core taproom at Rogers, nicely balanced with the hops dominant but not too dominant. Nice body and feel with malt roastiness then the citrus flavor of the hops kick in. Love the IPA in a sessionable form. It doesn't overwhelm. NWArkansas is blessed with two world class IPAs in my opinion, from Ozark and Core, giving us cause to really celebrate Thanksgiving.

The nose is really nice. Strong notes of piney and citrus hops that blend together well. This is a good, but not exceptional. It's really a session IPA, but the flavor is still there. Lots of citrus, piney and floral hops, clean slightly bitter finish. I like the nose more than I like the flavors.