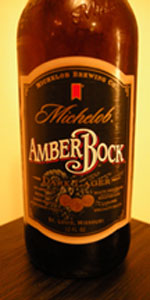 Notes: Michelob AmberBock is brewed using 100% malt including dark-roasted black and caramel malts and all-imported hops.
View: Beers
Reviews: 722 | Ratings: 1,941 | Log in to view all ratings and sort
Reviews by the Alström Bros:

12 oz brown twist off bottle with a "Born On Date" freshness date on the neck label.

A- Thin off white lacing barely holds together, deep reddish brown hue with a good clarity.

S- Clean nose with a mild malt character ... only a hint of toasted malt, nothing like a bock IMO.

T- On the sweet side with very little depth, touch of sharpness form the carbonation and simple hop bitterness. Finishes with an odd dextrin sweetness.

M- Ample crispness, a bit of smoothness and a creamy moderate body.

D- Not a bad stepping stone beer, quite plain but quite drinkable at the same time. This beer is to AB as Killians Red is to Coors. Misleading with the whole bock thing ... I'd love to see an all-malt 6.5% abv+ version from AB.

Ok. There are two major types of Beer drinkers. Beer snobs and Beer Geeks. Fuck a beer snob. Beer snobs say stupid shit like, Im a hop head, or macro=evil...Give me a break. The worst part about Michelob? They changed the bottle from the original design. Look, if you want a deep complex expirience buy some micro/can't buy any day but Thursday and Tuesday and its a limit of 1 per customer/we made a new beer out of fish ass and stop reading this.If you enjoy beer than this is a good/best american lager in the bock style. There is no lacing and it pours a damn full soda-ish head. It tastes good. Like a good beer, but its a Michelob! Its like 6 bucks a 6 pack and at 5.1% its decent. Look. I'm a beer Geek. That means I love beer. Fuck the beer snob s who judge. Do yourself a favor and buy a six pack of Michelob the next time your reaching for that $9.50 22 ounce Muffin Top/Space Cake and drink some god damned beer. Thank me later.

I'm 55, and tried alot of different dark beers/lagers/stouts over the years, of all I've tried, this one is my favorite, even knowing it's water source is criticized by most folk, I really like the taste better than most dark beers, just the right amount of carbonation, without too much bitterness, I think the only one better has to be imported,,, Guinness.

DATE: July 8, 2016... OCCASION: watching BattleBots on a Friday night with the fam... GLASSWARE: Michelob pokal... pours a dark amber, almost mahogany body that is nonetheless translucent, framing out a healthy amount of effervescence... the creamy white head sits ably, with variable bubbles... surprisingly robust plum and malt, though sugars suggest a macro birth... a soft, drinkably swift rush is provided, much like a flat soda... the taste is heavy in toasted malts, with plum, apple, and enough caramel to provide a true sweetness... some molasses as well... I find this beer to be above meager expectations, with its flavor profile sweet and sessionable, as a compliment to foods or as a succession of brews...

12oz bottle poured into a pint glass shows a beautifully clear dark amber colored body that even supported a 1/2in chestnut colored head of foam that disappeared before I could enjoy a drink.

Amazing. One of my favorite american Macro beers, but never reviewed it. Pours a nice caramel color. Slight amber on the nose. Taste is simple, but delicious. I like this beer any time of year. Very underated in my opinion.

Presentation- Via the tap into a 12oz glass mug.

Appearance- Pretty deep brown in color. Small rim of head when given to me. Left minor lacing behind.

Smell- Light notes of grain, chocolate and maybe coffee bean. Not strong in any way though.

Taste- Pretty smooth with an "in the distance" chocolate malt flavor. Grainy, but not too obnoxious. Instant coffee flavor detected as well.

Drinkability- Hmmm, much better than expected, but still barely a bock. Drinkable for sure though when given a lack of choice.

Look: Brown
Foamy: Pours very foamy but settles down pretty quick.
Smell: Beer smell, like a weaker porter. Malt is evident right away.
Taste: Hey Hey Hey! For a beer produced by a global greed factory, damn good.
More: I love it! I can usually get a 12 pack of bottles for 11.49 American Dollars. That works out to less than a dollar a beer.
At a poor boy price, this is unusually good beer. Tastes great even when at room temperature.
How many Greed Factory beers can you drink warm? Not many.

Great deal and has an embossed logo on the bottle for a touch of class!

I love getting these at bars that do cheap drafts, because out the usual suspects (Bud, BL, Coors Light and Miller Lite) this is the only macro that isn't complete garbage. Has a nice, thick, brownish body so the eyes are fooled. Because in reality there is very little malt or hops to even consider this a quality beer, yet alone a bock. It is extremely watery and plain, but the smoothness makes it easy to kill your glass. I like having one of these with a meal because it is like having a soda with your meal but you can still feel manly knowing you had a beer with your burger.

Overall not a bad beer from a Macro, but it doesn't match the style. This is basically a Bud with more roasted malt.
Pour looked good, medium amber with a medium body head.
Smell was malt and a bit of wheat. Some anise, I thought, was present.
Not much of a bock, more a light lager with dark features.

I can't drink regular American pale macro lagers, because there's no taste at all. Amberbock appears to be an attempt to appeal to folks who want a bit more flavor without being full-on IPA bitter. They succeeded pretty well. I like this beer as a standard lawn-mowing brew instead of the unacceptable insipid pee-water pales. I'm not a beer snob, but I demand the beer talks to me. It needs a flavor, and this one has it. Just sharp enough, fair mouth feel and the aftertaste, though a bit sweet, is acceptable. As for color, I can't tell you. I drink this right out of the bottle. Like I said, I'm definitely not a beer snob.

I mainly use this beer for marinating bratwurst before putting them on the grill. Don't care to drink it but it does give the bratwurst a good flavor!

A - Poured out a clear, copper color with a very fizzy appearance. It had a soapy, off-white head that dissipated rather rapidly.

S - It smelled of faintly of caramel and roasted malt.

T - This had a nice roasted malt (burnt toast) taste. The caramel flavor is subtle and understated. Also, a touch of bitter hops.

M - It is fairly crisp and smooth. A light to medium-bodied beer.

D - This really is a pretty good mass produced beer from A-B. Not a great bock, but drinkable when the situation arises.

It's good but there isn't anything that makes it stand out. It's beer with a smoother finish, and a medium body.

Taste Rating in Words: Just a blade of grass, in a field of grass, as far as the eye can see.

Bland, thin, and watery, with only a hint of the amber malt character of a typical bock. Granted, I had an old bottle, and this is the 4% Utah version, so the real one probably doesn't taste like it's actually been watered down (or at least not nearly as much). Maybe it would be at least passable if it were fresher and the proper ABV, but I have a feeling it wouldn't help it significantly. I'll update this review if I ever get a chance to and/or feel like trying the proper ABV version.

Aroma is faint caramel and a touch of sourness.

Flavor is lightly sweet with an underlying roastiness.

Finish is light and sweet.

S- Very light scent, not the stronger aroma of a strong bock. Honestly smells like a Budweiser

T- Best part about it. It's no true bock, but its better than a light lager. Has some malt character, no where near what a bock should be though.

M- Not bad, not great. Pretty much like any other mass produced domestic.

D- Another good point to it. I'm only writing this after my first one, but I can easily see having quite a few of these.

Compared to a real German Bock, it's an almost an insult. But compared to most of AB's other fine products, its a worthwhile beer, especially if you're a poor college student like myself. Not as good as some, but better than most everything else in its price range.

Looks good in the glass - like an amber. But almost no taste, bitterness or hop character. Not sure what makes it a "bock." For the same price you can get far superior Full Sail ESB or Amber, or many other decent offerings. Pass.

Let it be known that this is the ONLY beer that AB makes that I will drink. Had this on tap at Sports and Spirits in the bad ass town of Evans City.

Poured a relativly clear dark amber color with a bit of white head that soon vanished. It had a fairly sweet smell, with some hops detected. The taste was clean and showed some dark malt character. The mouthfeel is rather thin, and a bit too carbonated. But, for some reason, I can drink these all night long. Not too bad for such a crappy brewery.