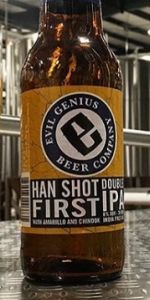 Notes: With Amarillo and Chinook
View: Beers | Place Reviews
Reviews: 17 | Ratings: 71 | Log in to view all ratings and sort

The lightly hazed golden amber colored beer pours out into a Duvel glass with a 1” off-white head that recedes slowly while leaving a sheet and a web like pattern of legs and patches of lacing on the sides of the glass. Even near the end of the beer there’s still a thin layer of foam covering the entire surface of the liquid. Sipping creates a couple of arches of lacing with lots of small patches and legs.

The aromas are fairly light and mild with some citrus (tangerine, grapefruit), a light resin and some spiciness showing, but not assertively. In the mix there’s also some lightly toasted bready malt.

Much as expected from the nose, the flavors are well balanced between the hops and malt so there’s the citrus, a bit of resin and some mild spiciness along with some noticeable malty sweetness that does not cloy. There’s also some lightly toasted bready malt. However, un-nlike some Double IPAs, both the sweetness from the malt and the bitterness from the hops are upfront and center stage together so they are very much a team.

The mouth feel is medium bodied with some gentle smoothness even with the moderate carbonation. The finish begins as the creamy sweetness and it’s partner, the hop flavors, all begin to fade into a semi-dry finish that persists as a light bitterness in the back of the palate.

Overall I’ve enjoyed drinking this beer even if only for the fact that even though it’s an Imperial IPA the malt, and it’s light sweetness, is a co-star along with the hop flavors as the other co-star. Thus they are a team that are not going to either cloy or beat up on the tastebuds. Since this is local I’ll probably be having this one again. If you want lots of bitterness from the hops you probably want to avoid this beer. If you enjoy hop flavors without a lot of bitterness take a look at this one.

Poured from a brown 12 oz. bottle. Has a dark golden color with a 1 inch head. Smell is of tropical fruits. Taste is tropical fruits, light malts, alcohol is well hidden, very mild bitterness for the style. Feels medium bodied in the mouth and overall it ain't bad, but didn't satisfy my need for hops.

T---Pineapple, mango & papaya. Most of the pine dankness is lost.

F---Juicy & wet. A little sticky with sweetness. No alcohol heat.

O---Evil Genius typically lets me down, but this time they got it right.

O: A solid tropical fruit-forward DIPA. Gentle... hop candy sweet and smooth. Hides the ABV a bit too well making it dangerous. Worth checking out if not seeking out.

My Happy New Evil/Evo/Evil Beer Sunday (Week 677) is now in full swing & this will be my third & last for the day from Evil Genius Beer Company. Any guesses as to what might be upcoming?

From the bottle: "With Amarillo and Chinook".

I Pop!ped the cap, but in so doing, I noticed some lees on the punt of the bottle. This meant that it was getting a very gentle pour into the awaiting glass. My efforts were successful, resulting in a glassful of bright Yellow-Gold (SRM = 4 - 5) beer with NE-plus quality clarity, allowing me to see into the future! There will be beer. This brought The Gelt Gang of Croesus, Midas Mammon roaring in from the living room, where they were watching the Pens/Blues game on NBC. Like me, they are Pixburgh fans due to the Black & Gold team colors. An in-glass swirl raised two-plus fingers of dense, foamy, rocky, bone-white head with good retention that left a load of lacing in its wake. Nose really smelled of Chinook & that was A-OK by me! Nothing like pine resin to get my heart beating. Mmm. Mouthfeel was just barely full, just creamy enough that I could not justify calling it "medium" or "medium-to-full". That said, do not expect N2-level creaminess & then vent your frustration to me. I just calls 'em as I sees 'em, Cesium. The taste was in the sweet spot between bitter orange and pine resin. Dang, but this was good! The relatively-high ABV was well-hidden, making it slightly dangerous, given its drinkability. Finish was dry, but not gasping and the lingering aftertaste was more towards orange marmalade while licking my lips gave me pine resin. Phew! Quite the day thus far!

Notes via stream of consciousness: It pours a nice two-finger thick head of fluffy off-white foam over a hazy golden/amber body. The head seems to have some staying power from what I've seen so far. Aroma? Not much, at least for a double IPA. I was expecting ~ HOPS!!! ~ but what I found were ~ hops ~. It's hoppy in a generic way, fruity from the yeast, and malty with a light breadiness. The flavor brings more sweetness in the malt with some honey and a touch of toastiness, but there's not much more in the way of hops. This is definitely more of a malty double IPA, which is OK, it's just unusual to find these days. The hops are floral, fruity (maybe mostly orange), lightly piney, and minty (probably seeming so due to mixing with the sugary malt, they're probably actually just slightly herbal). In the mouth it's dextrinous with a medium body and gently crisp carbonation that leaves it creamy smooth. Good points there, and to be honest it's quite smooth across the board because it's not really that bitter. Oh shit, I just looked at the label to check it and it's only 30 IBUs!!! "Han Shot First" my ass, this is the children's version of Star Wars that makes Han the hero as Greedo actually tried to kill him first (really bad shot that guy, BTW). Still... I like it, and it does pack a solid 8.0% ABV that never seems to show. Hmmm, I wonder, is it actually 8.0% ABV, it doesn't seem so, but maybe close. So what have I missed? Appearance: it has left some very nice lacing. Smell: over the period that it warmed up a bit it became a little fuller but never really changed its stripes. Taste: no changes there, it remains sugary, honeyish, fruity with orange and perhaps apple and some pear, and slightly piney and minty/herbal. Mouthfeel: as noted. Overall: Certainly an enjoyable, easy to drink "Stronger ale". Is it really a double IPA? Me thinks not, but that's OK, you have to label it as something, right? I'd buy it again, and that's not a hard decision to make. I like malty beers and for what it is and what it costs it's pretty good. How it scores as a double IPA, well that's another question.

L-hazy golden with little head
S-Little smell that jumps out.
T-not bad. A bit bland for me. Slight citrus punch at the end
F
O-I thought this was mild in flavor for a DIPA. But could drink this again.

Golden yellow in color with a heavy haze and straw yellow hues on the edges of the glass. Poured with a moderate, creamy, bright white foam with moderate retention. Medium sweet, stone fruit and over ripe orange aromas with a bready malt backbone. Medium bodied with medium light carbonation and pleasant boozy warmth near the finish. Medium, earthy, stone fruit flavors up front followed by medium hop bitterness through the middle. Mwdium malt flavor. Sweet dark fruit notes from the middle followed by boozy warmth. Finished semi-dryly with light fruity sweetness follows by mellow, earthy, hop bitterness. Balance tips to the hoppy side, although the hop character is subtle....and quite unique. The higher abv is well masked by the hop and malt character. Tasty and interesting.

Found it on tap. An interesting double IPA. Not much to look or smell, but dynamite taste. Elegant and refreshing with citrus, definate pineapple and then hint of pine. Hops are in the background. Mouth is medium with lighter carbonation. I would have this one again.

Not what I expected. At 30 IBUS I expected at least a little hop flavor. I'm getting a slight sweetness with a hint of citrus. No bitterness. It's not horrible but definitely not what I was looking for in a double IPA. Also as a note, no bottle date anywhere so it might be that it's not fresh.

12 oz bottle poured into a teku glass. Rotating six pack as of fall 2016. Double IPA hopped with Amarillo and Chinook. Named after the famous controversy as to if Han Solo shot a bounty hunter first in the famous Mos Eisley bar in Star Wars A New Hope. I'll have to side with Evil Genius, Han Solo is the man!

L - golden color, clear hue, super white head. Sediment was on the bottom of the glass but slow pouring kept it in the bottle

S - pineapple and mango, not really citrus. No alcohol present. Aroma intensity is almost like a bold white wine like pinot grigio

O - this is why they're called Evil Genius. They made a Double IPA with 30 IBUs, which is as bitter as a pale ale. Really elegant beer, almost like wine. Definitely out of the ordinary but they're good at that. Cheers!

Smell is pineapple, then some light biscuit malt and subtle pine/earthy hops.

Taste is less pineapple, but still fruity with pineapple or mango undertone, malt is there, bittering hops are light pine or grass. A basil component is also noticeable.

Overall a beer that has some mixed flavors, average appearance and sharp mouthfeel.

You're really asking for it when you name your beer "Han shot first."

This is so much better than I would have expected. Evil Genius, who I am not a fan of normally, making a beer with a star wars reference...seems like a bad novelty. But this was extremely tasty.

I tried this on tap at Al's Pizza and Subs, served chilled in a shaker pint.

The color is resplendent golden with a mildd hazed appearance and thick white head with fine bead and fast rising bubbles are visible with subtle lace. The smell is floral with a citrus aspect and slight malt sweetness with mild yeast ester. The feel is dissapointing in that it is creamy, malty and has medium carbonation -not bad, with moderate bitterness and semi-sweet finish.

The taste has light bitterness up front which is not unpleasant yet a sweetish malt follows with lightly toasted quality and mild caramel with creamines from yeast and light citrus in the back which about all the hops you get with slight floral hop and subtle alcohol in the semi-sweet finish. Overall this beer is not a bad tasting brew, but as far as an IPA it is not a very good representation of the style -it lacks hop flavor and bitterness is way to tame to be considered an IPA let alone Imperial anything