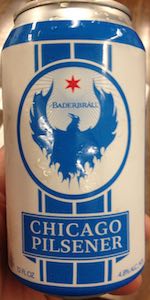 I spotted this one in a store teeming with an assortment of many beers I'd had before -- or just didn't care to try. Since I'd just seen the new Baderbräu guys on local TV excitedly espousing the goodness of their beers, I thought I'd give it a try.

I haven't had this 3rd incarnation of the 90s Chicago foray into craft brewing (yeah kids, craft beer has been around that long), but I tried the new brewery's South Side Pride -- advertising being decocted -- and was a bit underwhelmed. I liked the original Pilsner from Elmhurst, and the Goose Island rendition was good, let's see how the South Loop version fairs.

12 ounce can poured into my short Becher. No date to be found on the can.

L -- Clear, deep golden with a fizzy white head that drops like a stone.

T -- Grainy, crackery malts up front with nicely German-tasting hops dominating; spicy and lightly citrus. The hop flavor starts to become mildly resiny with more samples -- probably one of the newer noble varietals in use. Distinct hop bitterness in the finish and aftertaste -- I only wish the malt had a little more recognition.

F -- Crisp to dry mouthfeel with a medium-light body.

O -- It's not German, it's close to modern Nouveau Ami Pils, it's not the original by any stretch, but it's not awful either. It falls into the category of a small American brewery wanting to make a style that they really aren't familiar with -- so they make it like other new Pilsners they've tried. If only they'd talked with Metropolitan.

I picked this beer up as part of a make your own 6 pack that a local liquor store was having a special on. I had not seen this beer at that store before so I picked it up.

This beer pours a golden hue that is hazy (possibly chill haze) with high/racing carbonation that is graced with a white, frothy head that dissipates slowly. 3.5/5 The aroma is malty, clean, and hoppy (very nicely balanced). The malt is bready and only slightly sweet with the hops being very clean, grassy, and slightly peppery with just a hair of lemon zest. 4/5 The flavor profile is, once again, malty and hoppy at the same time, showcasing a very good balance that is very drinkable and flavorful. The malt is bready and grainy with just a hint of sweetness (like Cheerios) and the hops are grassy, peppery, and slightly lemony. None of the flavors are very strong, but they all work well together. The profile brings to mind a Czech Pilsener for sure, as advertised. Bitterness is light and lingers lightly after swallowing. 4/5 This is a light bodied beer that is highly carbonated which gives a scrubbing bubbles type of sensation. It is not overly dry, but it is a hair dry, and not quite as creamy and wet as some Czechs that I have had. The mouthfeel disappears upon swallowing. 4/5 This is really one of the best Czech Pilseners that I've had recently and really captures the style very well. Having had various lagers and Pilseners in Prague a couple years ago, this beer really does measure up nicely. 4/5

An excellent Bohemian style Pilsener. From a Pilsener glass.
L- Deep gold color with lively carbonation and slight cloudiness.
S- A balance of rich malt and clean hops neither over powering the other .
T- Rich, clean, malt taste with a slight spice of hops for balance.
F- Crisp and smooth.
Overall- An excellent drinkable beer any time of year. This has become my everyday beer.

Bought as part of a pick-mix at the local alcohol megamart just to try. Honestly, my tastes run more toward Scotch and Belgian ales, but I'm from Chicago, so pilsners are the beers of my youth -- and this is from a Chicago brewery. Was honestly surprised by this one. Crisp and refreshing (especially after sanding a cabinet outside for hours), and its faint hoppy bitterness at the end never got too strong -- leaving just a faintly bitter taste that balanced the malty sweetness. I don't know much about the look since I drank it straight from the can like a heathen, but the bit I saw was clear. I get the feeling that, if I was more of a pilsner lover, this would become my go-to beer.

Pours opaque and more orange in color than gold. Mildly effervescent. Thick frothy white head dissipates slowly leaving a thick residual head with lots of lacing, so thick its almost a white covering over the glass.

Smell is very bready - with an ever so mild floral hop presence on the back end of the nose.

Taste is again, very bready. Some mild earthy hops come through giving it a earthy bready flavor. Very simple and straightforward. The hops are rather subdued - its almost too balanced. Touch of honey sweetness on the back end.

Feel is medium bodied and a bit "heavier" than I'd expect in a pilsner. Medium carbonation. Smooth and easy drinking. Dry finish.

Overall this is a well crafted good pilsner. At the price, its a great deal.

Every can I've opened has had a nice froth emerging. Hop aroma with grain and malts. Malt coats the palate with hop lingering. Lively carbonation. Finishes dry with floral/grassy notes. This ended up being my Fourth of July fireworks partner. Fabulous in every way! Would buy again.

An interesting story on their website. And if anyone likes sleuthing for recipes, read their story.
I like that they revived an original craft pilsener from the early 1990s that MJ had reviewed highly.
It looks and smell like a typical pilsner, but it tasted better to me as it warmed. The hops balanced well with the malt and the carbonation low (which I prefer.)
What I especially like is that they are converting an abandoned warehouse on Chicago's southside into a brewery and the taproom is on the edges of the tourist district regenerating around the convention center. This, too, is a good story about beer.

Had a pint at Mike Ditka's in Oak Brook Terrace, IL in June 2015. Not bad. Would drink again. Good color and smell. Taste was a little light.

So far my favorite Pilsner.

I got this as part of a build-your-own six pack for $9.99 at the Binny's store in Bloomingdale, IL., making this single 12oz bottle $1.67. Supposedly, the people at this new brewery are reviving an old recipe for a beer with the same name that went out of business over 10 years ago. Having never tried this beer 10 years ago, I have no idea how close they came to making this taste like the original Baderbräu Chicago Pilsner, so I can only review it and score it as to how it tastes today.

The beer poured a clear golden color, but made only a ½-finger of white head that faded quickly and left no lacing whatsoever.

The beer had a nice noble hop aroma to it - very Saaz-like, along with some pilsener malt. Herbal, flowery, and spicy. It's not strong, but very pleasant.

Spicy and peppery hop flavor with a good dose of Pilsener malt for balance. It's a bit on the bitter side but in a good way. I liked it.

Don't know if this is what the original tasted like, but this one is very good.