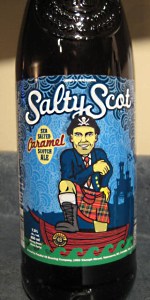 Notes: Building upon a Scottish "Wee Heavy", this unique beer was developed to provide a strong caramel malt flavour with enough salt to give it a bit of a bite. Stronger in alcohol, this beer starts off sweet but remains fairly light to drink.
View: More Beers | Place Reviews
Recent ratings and reviews. | Log in to view more ratings + sorting options.

The nose is fantastic. Salted caramel all the way. Malty. Hard candy. A touch of maple. Sourdough bread, along with some dates. What a lovely beer to smell.

Taste: Smooth and somewhat light compared to the nose. Definitely getting the salted caramel and malty notes, but the lower ABV (7.5%) brings it down a notch. I can only imagine how this would taste if the ABV were above 10%. Anyway, lots of dark fruits. Plums, red grapes, and figs. Brown sugar, chocolate, root beer, and an earthy note. No hops detectable. Just a really nice tasting beer!

3.76/5  rDev -3.6%
look: 3.5 | smell: 3.75 | taste: 3.75 | feel: 4 | overall: 3.75
Pours a clear brown amber with a reddish hint. The pour produces a short 2 fingers of tan, shortlived, bubbly head which leaves only thin wisps of lace. Quite mundane in appearance. Aroma is roasted and burnt malt: toffee, butterscotch; dark chocolate and fruit maybe a hint of smoke. Taste is molasses/caramel/toffee, roasted nuts, dark fruit, semi-sweet dark chocolate with a buttery, smokey, dark fruit, pumpernickel and briny finish. Afrertaste is salty, sweet, deeply roasted malts, roasted nuts and toffee/molasses. The salt is very evident. Mouthfeel is medium bodied was low-moderate carbonation, creamy but a little slick with a faint peppery prickle in the finish. Overall I would call it good but not great and would not purchase it again.
Sep 27, 2020

Taste was figs with salted caramel. Finish was on the edge of cloying the palate.

Mouthfeel was light for the style and kind of smooth.

Overall a decent dessert beer, fun to have tried!

Rated by Elysha from Japan

From the CAN: "Ladies & Gentlemen"; "Sea Salted Caramel Scottish Style Ale"; "2015 US Open Beer Championship Gold"; "CANada's Select Brews Product of CANada"; "We put the kettle on for a long boil and this Scottish Style wee heavy is what we got."

This one surprised me on the Crack! when it revealed itself to be a brimful craft CAN with nowhere for the tongue to go. As a result, I got a pretty good spray and some foaming afterwards. My Glug was fairly quick since I wanted to get the beer into a glass & stop the foaming action coming through the vent. It formed two fingers of dense, foamy, rocky, deep-tan/light-brown head with decent retention before slowly falling to wisps, leaving decent lacing in its wake. Color was Deep Amber/Light Copper to Copper (SRM = > 13, < 17) with NE-quality clarity. Nose was super sweet, very much of caramel and roasted malt with a hint of salt. Mmm. Mouthfeel was medium. The taste was very much of salted caramel! I am not one for sweets of any stripe, as you know if you follow my reviews, but I do like salty & I have been known to pilfer salted caramels when they are available. They are two seemingly incongruous tastes that really work well together and they definitely do so in this beer. The site's Style Guide mentions a low bitterness, but I would say that it was non-existent in this one. It was sweet & salty, but that was about all. In fact, it did a great job of hiding its inherent alcohol, which could be dangerous in quantity. Finish was sweet, no getting around that, but it was pleasant, not at all cloying. Man, this was a nice beer right out of the gate! It lived up to billing & was a really nice example of the style.

Taste: More butterscotch than caramel, but since the two are closely related, we will call it caramel; the middle dries out, as a result of the salt, though there is really not much of a salty character here; the finish is much like the start

Overall: I have had this bottle in my cellar for about four years and it is drinking nicely but it is what it is; an interesting twist on the style but ultimately rather one dimensional

Tastes of rich, and clearly presented caramel. Hints of creme brulee, toffee, but not really getting any salt, though its there.

Got this online from wishbeer, drinking in Chiang Mai, June 7th, 2018. Excellent brew based on a great idea.

Reviewed by Clutch28 from Canada (SK)

Taste: first hit for me was like raisins soaked in rum, then the caramel hits, not too sweet before the malt backbone arrives bring some chocolate along with bread, dries out nicely at the finish.

Feel: Feels lighter on the tongue then i was expecting from a Wee Heavy. Sort of a light bodied Wee Heavy to me.

Interesting beer and worth a try. Not really a super stellar beer but it lives up to it's billing at least.

Having paid that compliment, I must say that Salty Scot does not Look like much. Perhaps a nice dark amber, but no suds.
On the other hand, it's honest Smells like a caramel sauce. While not as sweet as that, it still Tastes like a beer; using just enough hops to remind me of beer. It sits in the mouth the same way: a balanced dessert.

This is my first from Parallel 49, a restaurant/brewpub that offers great variety while seemingly having great fun. I hope to visit Vancouver soon and taste their ales that are hard to find in the Midwest.

Reviewed by TooManyGlasses from Canada (AB)

Repeat June 30/20 Maybe COVID makes everything taste better (unless you have COVID) but too delicious - sweet, caramel - nutty, toffee and a little salty bite. Great.

Reviewed by Deerin from California

This ale is light brown, with decent visible carbonation. Not that deep, kind of a tootsie roll color, maybe some reddish hues. The head recedes entirely to give off a fizzy look.

A lot of flavors instantly hit the palate.i get a bit of dark fruit or plum, fig. Caramel, pretzels. Sweet malt. This tastes really good and is exactly what you'd expect given the title. There is a twang in the finish that I'm not crazy about though.

A little bit syrupy, not cloying, good carb, solid feel all around.

Quite good, but not exceptional.

Clear brown ruby in color with very thick frothy light tan head, it stands with pretty good retention and gradually dissipates to a long-lasting bubble sheet on the surface and leaves some lacing patch and spot on the glass-side.

Still lots of malty goodness dominates the palate sensation with notes of rich caramel, toffee, chocolate, nuttiness, sweet candy, biscuit, bread, and brown sugar while sea salt adds some crisp and salty touch in the middle. Hop is muted with only just some faint fruitiness. The end and aftertaste is quite lasting with caramel sweetness and lightly toasted profile.

Medium body with some crisp and low to medium carbonation through the palate, it is proper and enough to carry all the things well under smooth mouthfeel and dry finish.

The best description to this is malt and malt and malt. Malt is everywhere with immense caramel profile along with some touch of sea salt to give it a bite. Great to enjoy chill not too cold.

Reviewed by dillybarrrrr from Canada (BC)

4.12/5  rDev +5.6%
look: 4.25 | smell: 4 | taste: 4.5 | feel: 2.5 | overall: 4.25
Salty Scot poured from a 650mL 7.5% bottle to a tulip. No bottling date
Been hesitant to pick this one up due to its description and me not being a fan of winter beers. Gave in due to it being parallel 49 being my fave brewery
L: First off i gave this a pretty rough pour that would usually give most beer a half a glass of head. It turned out to only give me about a finger, or a thick finger at most. Look is quite unique, not as light as a honey based beer but not dark as a porter or stout. Very unique, intriguing.
S: Thiiiiccckk caramel smell, scratch that, burnt caramel. Hints of honey and chocolate
T: The thick caramel smell blends into a very balanced taste, a touch of sweet, due to the chocolate more than caramel imo. Some reason picking up purple grapes/red wine flavor not much but a bit.
Feel: Very generic, just winter-y, nothing special, the most lackluster part of the beer
Finish: Very light despite the color suggesting otherwise.
OV: Very surprised actually wish i would have picked it up sooner would have again and will stop avoiding the 12pk with this as the guest. pick one up before winter is over.

Reviewed by donspublic from Texas

3.88/5  rDev -0.5%
look: 3.75 | smell: 3.75 | taste: 4 | feel: 4 | overall: 3.75
Stereotypes always depict the Scottish with red hair and Salty Scot's fair auburn highlights do nothing to quell that perception (although at least it's not wearing a kilt). The coppered complexion straddles the boundary between clear and hazy but is very vibrant. Its head, on the other hand, is shall we say much more 'dispirited' and can't even be bothered to leave lace.

Despite its name, Salty Scot is far from aggressive or boisterous. In fact, it's surprisingly shy on personality, especially in the aroma. Clean, concentrated maltiness is first and foremost (as it should be) and, caramelly notes notwithstanding, it doesn't smell especially sweet (nor should it) and yet, while stylistically solid, it leaves something to be desired...

But I'm hard-pressed to think of what's missing. The combination of crystal, Munich and chocolate malts ensures toasty, nutty undertones in addition to that crunchy caramel flavour. Sea salt, really only noticed on the finish, nonetheless compliments the sweetness in the aftertaste (and makes for a bit of a pretzel flavour). Again, from a technical standpoint, it's on point.

Consider that Wee Heavy is a caramelly-sweet style to begin with - you'd expect the addition of actual caramel to put things over the top. Fortunately, you'd be mistaken. Credit to the brewer for using enough hops to prevent things from getting cloying or syrupy (cardinal sins for any style, especially this one). They've done a marvelous job at hiding the 7.5% alcohol too.

Parallel 49 may take Salty Scot away in the warmer months... but they'll never take OUR FREEDOM!!! Sorry, had to do it. Seriously though, this is a fine winter seasonal and, despite my initial presumption, isn't the least bit gimmicky. It may be geared more towards the general consumer and is hence a little "tepid" but it's still a worthwhile and well-brewed recipe.