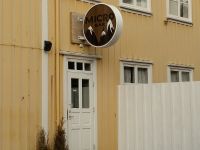 I can't claim to be an expert on Reykjavik beer experiences, but this was a cool little place with a pretty interesting selection of beer, mostly Icelandic craft. One server was pretty friendly, the other was pretty aloof. I definitely liked it, and would go back if I had the chance.

Went in the afternoon just after they had opened (3 pm) and stayed for a couple of hours just hanging out and having a few beers and playing scrabble with the family. One of my two favorite places in central Reykjavik (the other being Mikeller and Friends). Really nice selection of Icelandic craft beer, including hard to find collaborations- not huge, but very well curated. Aside from the very nice taps there are some more excellent cans and bottles including a few things I wouldn't have expected like Founders CBS. I was there for the icelandic beer and was pleased to see several from my two favorite Icelandic breweries- Gæðingur Öl and Malbygg. Cozy room below street level- warm and inviting, and unlike some others I found the service friendly. No food to speak of, except for some chips, perhaps. They do have sample trays as some others have mentioned, but I didn't order one (perhaps that's why the service was so friendly!). Whiled away a very pleasant afternoon here- recommended.

Smallish selection
Way over priced
Somewhat surely uninterested staff
Below average beer by US standards
Iceland is small, but this wasn’t very impressive

go through the door and down stairs into the basement where this bar is. there is a smallish bar with half dozen seats and then some tables. low ceilings, dark lighting.

They've got about 20 taps of mostly Icelandic beer, about half were from Gæðingur Öl which they have some relationship with. Beers are from 1100 to 1600 ISK for Imperial Pints which was better than some other bars.

Underground, nice stone walls, a small bar but lots of tables. 16 handles on tap; I never saw or was offered a bottle list. At least ten of those were from Iceland, the rest around Europe. Food available but I didn't have any.
I was there about 9PM on a Friday which I guess is prime time. Fairly noisy, packed yet it didn't feel crowded. My two gripes: first, everything got served in the same glasses. For having one of the biggest/best draft selections in the city the glasses should match.
Secondly they had two bartenders, sometimes only one, serving everyone. That would be fine if they didn't seem to focus on their 5 or 10 beer flight offers everyone was ordering. I just wanted a single glass. That would have taken a fraction of the time to pour as a flight but it took me over 20 minutes to get the attention of one of the bartenders even sitting at the bar because they were focused on constantly filling all of these small flight glasses. I need to try to stop by during a less-busy hour, hell I might even try a flight then. But they either need to bring in more help or not do the flights during their busiest hours.
That rant aside, I really appreciate what they're bringing to a macro-heavy part of town, focusing on local and keeping micro brew prices in their establishment no more than a macro costs at most places around town given that Icelandic prices at baseline are fairly high. The vibe and selection was great, service could just use a bit of a boost.

Really quite a nice atmosphere for a bar. You walk downstairs, welcomed by a couch decorated with horse leather (partially). You walk in and there is a basement type bar, about 15-20 tables, some for 2, some for 4, and a bar at the end with a handful of stools. 14 Icelandic beer taps and a nice list of beer in the cellar. Solid selection, good quality beers. They do 5 and 10 tap samplers, but note that taps 11-14 are more specialty and are not included. Prices are typical for Iceland, that is to say, a bit higher than we are used to in America. But this is a great place to get a handful of local Icelandic beers.

Like everywhere else in Reykjavik, this is easily accessible if you're staying anywhere near downtown. It's connected to a mid-priced hotel, and it gives off an accordant vibe. It's not super hip or hyper contemporary. There's nothing scenestery or wacky about the place. It's just classy and accessible.

The name is a bit of an over/under statement. The place isn't big, but it easily seats 20 people. The bar itself is small, though; only about 1.5 American-sized people can comfortably stand by it at one time, and so you need to use strategy when planning your refills.

The bartenders were all quite friendly. The tap and bottle list is written in chalk, large and legible. The bottles were all things I'd either heard of or could easily get in the US, with the exception of some of those really gross 35% ABV beers from Brewdog. There was, sadly, no Cantillion to be found during my visit, and they had just sold their last Westy the day before I arrived.

There were a dozen taps, almost all local, with a heavy emphasis on Ölvisholt. Many of the beers were listed without an explanation of their style, but the bartenders did a pretty good job of explaining what each was.

Best of all, they had the cheapest craft beer prices in Iceland. Tap selections were about $9-14 for 16-20 oz pours, with a daily happy hour knocking a buck or two off most taps. If this sounds egregious--well, then you've never been to Iceland.

The bottles are similarly reasonably priced. The European bottles actually sold for less than what they would cost in American bars: Le Trappe's Quad and Boon's Geuze were only about ten bucks each.

Overall, this is obviously a must-visit if you're in town. Mikkeller is buzzier and cooler, and might have the more exciting selection, but the two bars are like 3 blocks away from each other so you can easily hit up both in an evening.

This is an excellent bar and a must-visit if you are in Reykjavik. Excellent selection of Icelandic beers on tap and a tremendous bottle selection from the likes of Mikkeller, Evil Twin, To Ol, and the European Trappist breweries. The owner and the guys that work here are first rate and are at the forefront of the craft beer scene in Iceland.

This place is an amazing gem in Iceland. I went here numerous times during my vacation. The owner is a great guy and very knowledgeable as well as the staff. The selection was amazing considering where Iceland is located ( Pirate bomb on draft, Fred's Blend Bottles, Westy 12, Port Brewing etc). If you're ever in Reykjavik this is a must place to go to. Be sure and get a flight to try the Gaedingur Brews as well

If you happen to find yourself in Reykjavik, Iceland, than you definitely need to check this one out. The prices are a bit steep, but they have an impressive bottle collection which had several Cantillons, Evil Twins, and even a Westie 12. Friendly bartenders and a great local taplist were a plus. Their bottle list book was sadly outdated, but you'll still find something you want here...unlike the rest of the country which could use a lot more places like this.

If you find yourself in Reykjavik, this is a must hit. I was there for 4 days, went to this place 3 of those days. On tap they have a great selection of Icelandic craft beer. But if that doesn't suit you, or you're looking to venture out, they have a great bottle selection behind the counter, and even further, they have a cellar list with some amazing brews. For instance, while there and chatting up the bartender, he informed me he had just gotten in some Logsdon Peche 'n Brett. I promptly laid down my krona and scooped ups bottle. The guys behind the counter and incredibly knowledgeable and very eager to talk beer with you. A good spot for beer folks.

I had 24 hours in Iceland. I asked for a recomendation for good bar with good beers in Reykjavik. I hit gold. This is not the most atmospheric place on earth, as I'm used to English pubs and a few US bars but if you're in Iceland, check it out. The beer selection is amazing.It rivals most US bars, including the BBC chain, just to show I'm nor completely biassed. There were 8 taps of local beers, none of which I knew. I asked for a recommendation based on my preference and was not disappointed. After a couple of brews, I left with a T-shirt and a couple of bottles of 'Lava'. It will be the first bar I go to next time in Iceland.

Reykjavik is known for having a lackluster beer scene, combine that with prices of over $10 a pint for a crappy lager and your expectations would be pretty damn low too. However! Mirco Bar is a gift from the beer gods.

Well over 60 bottles from the US (Sierra Nevada, Rouge) Denmark (Mikkeller) Belgium (Delrium, the usual trappists, Rodenbach, Drie Fonteinen, Cantillon, yes Cantillon in Iceland, and even all the Westys) and some fantastic Iceland craft (Olvisholt). On tap they had about 10ish mostly Icelandic craft brews for a reasonable price. $8-9 for Lava a local Imperial Stout that was fantastic. Even the bottles were priced great my and friend I split a 75cl bottle of Iris for around 3.800 ISK around $30 a real treat.

The bartenders were all extremely kind and outgoing, telling what was upcoming and coming in Icelandic beer scene as well as stating their jealousy of mine ease of getting some American brews. This place is tiny, only a few small tables and fills quickly so get there early especially on a weekend. They do offer some small plates food wise I didn't try anything so can't comment on that front.

Overall one of the most memorable bars I've ever come across. Two Americans drinking Cantillon next to a German couple drinking Sierra Nevada Pale Ale all while in the northern most capital in the world.

Micro Bar is a small place that's connected to a hotel lobby that we randomly found one afternoon walking through Reykjavik. They have a nice selection of Icelandic beers on tap (including a smoked RIS called Lava which I found very tasty). Their bottle selection consists of a very good sampling of Mikkeler beers and other Euro breweries, as well as a few American ones. The guy working (Steinn), was really helpful and talked at length about all of the Icelandic beers to help me make my decision (I asked him that I wanted to try an Icelandic beer and if he could recommend one). Prices, as far as Icelandic standards, are extremely reasonable, especially given the quality of the beers they are selling.