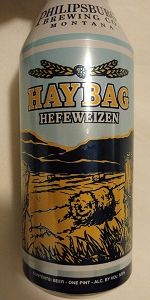 Notes: Citrusy and dry, this wheat beer uses 40% malted white wheat from Washington to give a mouthful of cereal flavor, all while being incredibly drinkable and thirst-quenching. Cascade and Willamette hops provide grassy citrus flavors and aromas. The special yeast strain stays in suspension for that signature cloudiness. “Haybag” is a term of endearment used by some local men when referring to their wife or girlfriend, eg: “Look at all those haybags sitting at the bar.”

New brewery for me

Brewers Notes: Citrusy and dry, this wheat beer uses 40% malted white wheat from Washington to give a mouthful of cereal flavor, all while being incredibly drinkable and thirst-quenching. Cascade and Willamette hops provide grassy citrus flavors and aromas. The special yeast strain stays in suspension for that signature cloudiness. “Haybag” is a term of endearment used by some local men when referring to their wife or girlfriend, eg: “Look at all those haybags sitting at the bar.”

Nice beer. They describe the beer properly but it’s missing some of the classic yeast flavor styles

a neat take on a hefe here, some different esters to the yeast profile, almost a saison meets a traditional german hefe, some of that vinous and farmy character to this, kind of rugged and earthy and raw, but still well refined, which makes this a rather unique beer, anything but standard in the style, but equally summery, drinkable, and refreshing as any. i am curious about the fermentation here, is it just different conditions for a standard yeast strain, or is it something different, multiple pitches at work, or some flattering off flavor? its really tough to tell, as its not extreme, but its enough to make this weird in a good way. some nice haziness to this pint, a pretty richer color, and a classic looking white head with good rise on it. aroma and flavor of ripe banana, cracked pepper, and lemongrass, with the obvious earthy straw and hay complexion of some white wheat. a touch of honey sweetness in the middle, some drier cereal grains, and an almost farmy sort of yeast complexion behind the more familiar hefe notes. apple and pear and even like a wet burlap thing, which gives this a cool rustic aspect i am not used to in the style, but it also doesnt make the beer seem flawed or amateur, its hard to place, but i dig it, id love to know if its intentional or not. there are some hops on the finish too, which add to this being a little different, and its fluffy feeling, bubbly, and satisfying to drink. not sure how neatly it fits the expectations of a classic example of the style, but it stands out from the crowd in a cool way. i liked this quite a bit, and remain intrigued by its fermentation profile. the name is funny too.

Served on tap in a pint glass
Appearance – The beer is served a hazy golden color with a one finger head of white foam. The head has a decent level of retention, slowly fading over time to leave a moderate level of foamy lace on the sides of the glass.
Smell – The aroma of the brew is big of a wheat smell mixed with a little bit of yeast, coriander, and clove. Along with these smells comes some light notes of banana and a touch of grass.
Taste – The taste begins with a sweeter wheat bread taste that has a moderate yeastiness right from the start. As the taste advances it seems to sweeten as well with some orange and banana joining into the taste. As the taste moves onto the end more spice of clove and coriander come to the tongue, and along with some light candied sugar tastes, it leaves one with a sweet and wheaty taste to linger on the tongue.
Mouthfeel – The body of the brew is medium in thickness and creaminess with a carbonation level that is rather average. Overall the feel is pretty nice and makes this a very easy sipper.
Overall – A nice, easy drinking, and sweeter hefe overall. Quite tasty and worth a try if you get a chance.