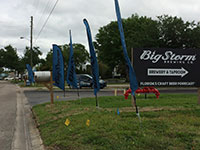 Good selection of beer on tap. Service was very good. Food available. Good place to go to try the beer. Nothing fancy.

Out and about for the Cinco of Mayo. We’ve gone north and east today, when usually the heading is all south south south, and a good decision to beer this day; the alternative being to hang back and watch The Phantom Menace and I just, I just can’t. So Big Storm; a brewery of some clout no doubt, as they’ve got a real highway sign out on 54 pointing their way. J & D point out Vallarta’s Mexican Restaurant on the corner and tell me of lunch plans to come. And then we’re quickly up on the large standalone with a car show in the front parking lot. I look lovingly on the ponies and sadly upon the Challenger for Jonny (having seen some of the footage from his trial on the interweb and knowing what comes next). Too much real life stuff. I must focus instead on the beer (and burrito) to be…

Enter in off the bar into a large cavernous space. Pebbled concrete floors, white ceilings and ducts, & corrugated walls with some framed pics here and there. Can cooler up front and a swag corner off the entrance. A large flat sits over the door showing the weather report all wrong. Barrels and balloons.

‘C’ shaped bar off to the right with a blue slab concrete top and electric blue glow lit underside, vertical wood plank base, & a foot bar; seating for 16 on black leather stools. Double barbell holds 20 logo handled taps on the barback counter, 10 & 10. Blackboard on the horizontal plank barback wall above lists tap selections (beer, sometimes styles but most times not, & ABV). Mounted spot lamps on the board just above and medals dangling from a mash rake handle in between. Flatscreens to both sides showing lots of Derby disqualification activity happening this day (Is there no honor?) ‘U.S. Open Beer Championship’ award banners and a ‘Best Florida Beer Championship’ banner above the bar, below drop pan lamps up high. A seemingly dead headpump sits sadly to the left of the tap tower, a Crowler crimper rests on the right side, & glassware shelved below the bar.

Room behind the barback (which by the way, is just a plank wood wall divider) holds 6 tables, cushy chair action, 3 flatscreens, and a cornhole set. My guess is that it’s usable as an event space, too. A dozen tables riddled about between the barside corralled and the room behind the bar; hightops, lows, squares, recs. There’s also a small small room forward the bar holding a few cushys and a gaming console. Some ad pieces there, too. And lest I mention there’s a large brewery to the rear of this giant space and it’s a real brewery (as opposed to that 2 barrel and pots & pans place we saw last night).

Beers were fair to good overall with some standouts, troo. Probably need to get into the hoppier side of things next time, but you know I’m all about the malt. We were all revved up and then, hey, guess what? Vallarta’s won’t do takeout on Cinco de Mayo. Fuck the them, we will eat elsewhere. The rain’s a-coming and the car show left. It’s time to be moving on.

As Whyemier said, you're there for the beer. I found the vibe interesting, but don't expect a "traditional" brewery vibe. The actual quality of the beers is excellent and the staff is super-friendly.

Cozy as shit; winter vibe, year round, mug-club, probably not dog friendly, too close to the action very cool anyway. Slow rolling on BA beers due to limited space.

Big Storm Brewing, located in a small semi-industrial plaza in Odessa, Fl. When you go don't expect an extravagant atmosphere or decor. You're actually seated in a small room right off a small brewing operation. You're there for the beer.

I went at the suggestion of some of those I work with. The brewmaster and his assistant are friendly, the room is air conditioned, a welcome in the Florida heat, and will seat about 18 in a pinch. But you're there for the beer.

Sit and enjoy a beer with friends and let the flavor draw you back again.

The beer is something to write home about, brewed in small batches and served up in growlers or by the glass. The atmosphere may not draw you back but the beer should.

I'll need to go back soon to refresh my memory and write a review on some of their brews.