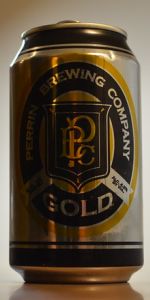 Crisp and subtly sweet, it's crafted with the traditional beer drinker in mind.

Taste: subtle sweet malts with lemon and some citrus. Not overly complex but clean tasting and good with food pairing (grouper).

Mouthfeel: moderate carbonation. A little thin but seemed about right for the style.

Overall: enjoyable with a meal and just substantial enough to make it likely good on its own. Probably won’t seek out but would drink again.

Sampled this one on tap. Nice golden color with nice white head that quickly disappeared, no real lingering lacing. Smells faintly of grain and corn. Tastes of malt, corn, grain and a little caramel. Reminds me of a smoother AAL. Thin mouthfeel, decent carbonation, just a trace of a bitter aftertaste. A nice light beer that’s got both some nice sweet notes.

On tap at Rattle n Hum, NYC.Pretty enough. Light golden color with a stingy head but it was not flat on the tongue. Aroma was funky but the flavor was clean with a good texture.

A bit light for me, especially when I'm staring a 40 tap menagerie. It's worth a place as it's light & clean & a mvery managable 4.8 ABV.

Poured from 12oz can into standard pint glass. No canning or freshness date.

Pours a straw color with moderate carbonation a lace for head. Smell is slightly malty and sweet. Taste is sweet, slightly bitter, and a little dry. First blonde ale I've reviewed and the style is better than i remembered. I was expecting a ale version of an adjunct lager, but i was way off.

Having this one tap at a schwanky corner bar in Manistee, MI. Absolutely nothing unique or memorable in this item, other than the fact that it's low ABV and AAL style approachability could make it a macro crowd pleaser. Nose is mainly corn, taste is almost entirely corn with a touch of noble hop bitterness on finish and mouthfeel is thin, watery and a little slick. From the mundane start (little fizzy head, minimal lacing ) to finish, this is for coincidental drinking I'd say, not for a contemplative drinking experience.

I picked up a can of Perrin's Gold for $1.69 at The Lager Mill. I've had this beer before and I thought it was decent, but I thought I would give it another try now that it's in cans, so lets see how it goes. 2016 Vintage. Poured from a 12oz van into a imperial pint glass.

A- The can looks good, it's got a classic look to it. It poured a fairly clear pale yellow that took on more of a golden color when held to the light with a finger and a half worth of creamy and bubbly off white head that died down to a thin ring that eventually faded away and it left some spotty lacing behind. This is a pretty nice looking beer, I have no complaints.

S- The aroma starts off with a higher amount of medium sweetness with a big sweet and bready malt aroma being the first to show up with some grainy and pale malt like aroma with lots of doughy yeast showing up. I didn't get any hop aromas. This beer has a nice aroma that's pretty true to style.

T- The taste seems to be very similar to the aroma and it starts off with a higher amount of medium sweetness with those same sweet and bready malts being the first to show up with all those pale malt aspects and grainy aspects showing up in the background. Up next comes a little bit of creamy flavor that leads into the yeast which imparts that same doughy aspect. On the finish there's pretty much no bitterness with the sweetness taking it's place and it had sweet, doughy, and bready aftertaste. This is a decent tasting beer, but I wish it was a little less sweet.

M- Smooth, crisp, fairly clean, on the thicker side of being light bodied with a higher amount of carbonation. The mouthfeel is pretty good and it works well with this beer.

Overall I thought this was a decent beer and it was pretty close to be an average example of the style, it had most of the aspects that I look for in the style, but when it came to the sweetness it was a little too high for the style and for me. This beer doesn't have have best drinkability, it's too sweet to session, one is enough for me. What I like the most about this beer is the appearance and mouthfeel, they were pretty nice and true to style. What I like the least about this beer was the sweetness and drinkability, they need some work. I don't think I would buy this beer again, but I don't think I would turn down one and I can't say I highly recommend it, but if you don't mind this style a little on the sweet side then I think it's worth a try. All in all this beer was just how I remember it, it's not bad, but I don't feel like it's a great example of the style. It's pretty close to average for the style and it's my least favorite beer from this brewery so far. Better luck next time guys, this one could use a little work.

Perrin is still a relatively new and unproven brewery. I've only had two of their beers, with one being great and the other being quite average. I grabbed two more tonight so that I can truly see how I feel about them. This is intended to be more of a palate washer given the style but I have had some past palate washers turn out to be exceptional for what they were. Here's hoping this goes the same way.

Look - From the twelve ounce aluminum can hard poured into a pint glass. This brew is a stop and go pour as expected seeing as it is coming from a can. Pours a see through slightly dehydrated yellow with a big thick frothy head that stands two and a half fingers when all is said and done. It sticks around for an eternity as well. I'm seeing minimal amounts of carbonation. The lacing and stick is moderate.

Smell - There is a lot of wheat on the nose,almost corn flake like in nature but it is quickly countered by an interesting fruity aspect that reminds me a lot of the fruit pebbles cereal that they used to sell in supermarkets. Can't quite put a finger on which specific fruits,but it is there. No cheap adjuncts to be noted in this aspect.

Feel - The body isn't very big, about the higher side of low with a low amount of arbonation but there is a very nice, slick, fruity juice like feeling as it sits in the mouth. Flavors remain all the same and it swallows easy as can be. Almost a bit tart as well if I dare say that.

Overall - This reminded me of a Sam Adams Summer Ale, only the lemon remained pleasant and didn't become dish soap like in nature. This is definitely a beer you can give to your BMC loving friends and a good take on an under represented style. This may become a staple in my fridge as a palate washer or just an all purpose beer for anybody that comes over. Not earth shattering, but it wasn't meant to be. Also nice as a bridge to get somebody to start trying different styles. As always, try it for yourself and come to your own conclusion .

A - Pours a pale golden yellow with good clarity. A finger of white head that quickly dissipates with zero retention.

S - Bread dough, grass, overall not a big nose on this one.