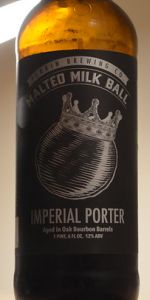 Reviewed by BigIronH from Michigan

3.79/5  rDev -11%
look: 4 | smell: 3.75 | taste: 3.75 | feel: 4 | overall: 3.75
Pours dark brown/Black with a finger of mocha foam, reducing to a ring and spotty lacing. Nose is vanilla, oak, raisin, and chocolate. Taste follows suit. As it warms it becomes a bit creamier but it really just maintains that base barrel character without ever fully morphing into the delicious malted milk ball treat I was expecting. Feel is silky smooth, velvety; not oily. Decent beer
Dec 12, 2021

3.81/5  rDev -10.6%
look: 4 | smell: 3.5 | taste: 4 | feel: 3.75 | overall: 3.75
2020 Bottle.Pours a deep chocolate color with a slight reddish/brown tint,a thinner lighter beige head atop.Rather muted aromas of chocolate,sweet vanilla,and a touch of oak,nice enough but muted for the size of the beer.Flavors start out with heavy bourbon/vanilla then melds into chocolate and a boozy finish.As it warms more vanilla emerges and booze is tamed slightly.2020 bottle not up to par to the other?Not sure but this was a bit of a let down for me I hate to say.
Jun 22, 2021

Capped and taped large bottle poured into a snifter, one finger creamy taupe foam cap over a deep brown cola liquid. Micro carbonation streams are visible. Remarkable as those bottle was "injured" in transit despite the senders best efforts. Good retention, settles to a thin ringed layer. some lacings

Taste is cocoa, vanilla, bourbon taste with no heat

4.28/5  rDev +0.5%
look: 4.25 | smell: 4.25 | taste: 4.5 | feel: 4 | overall: 4
Cracked open the bottle from a 2018 Christmas gift that was kept in a cool, dark basement. Still tastes like it was brand new. Pours a black color with a tan head that disappears quickly. Aroma is chocolate, vanilla and caramel malts. Tastes of chocolate with a hint of vanilla and a good alcohol burn. Starts sweet but finishes with a slight hoppy bitterness. Good mouth feel. Excellent choice for a stay-at-home Saturday.
May 02, 2020
Rated: 4.35 by EMH73 from New York

HEAD: ~1cm in height and pale khaki in colour, dying in less than a minute...not robust, but then I suppose that's to be expected in a 12% ABV brew. Leaves no lacing on the sides of the glass as it slowly recedes.

Appears well (or perhaps slightly under?) carbonated. Generally appealing but not a stand-out appearance for an imperial porter. The gilded tan head found in the best expressions of the style is absent here.

AROMA: The vanillin of the bourbon barrel is evident, but I don't get bourbon's finer notes (e.g. toasted white oak, rich coconut) or barrel sugars/barrel char. Subdued scintillae of dark fruit. I don't know that I'd find lactose sugar if I approached this without knowing it was in there; it blends in seamlessly with the malt sweetness. The vanilla is similarly indistinguishable from the bourbon barrel vanillin; it's not so authentic that it's recognizably vanilla bean-derived. Cacao? It mixes with the chocolate malt.

Where the bourbon barrel should accentuate the additives and vice versa, they don't - one just replaces/eclipses the other, and it's the more rudimentary note in each case. I'd rather have rich cacao nibs evoked than mere chocolate malt,. actual vanilla bean than barrel vanilla, etc. (though judging by the implied sweetness of the aroma, this doesn't seem like it needed the lactose sugar at all).

I'm missing any bitterness contributors (e.g. roasted barley, coffee, hops), and it seems a bit too sweet as a result though it doesn't seem like a dessert beer.

Doesn't seem too warm alcohol-wise. I detect no off-notes.

Aromatic intensity is actually somewhat mild, at least for a 12% ABV bourbon barrel aged imperial porter with a bunch of additives.

Suggests an enjoyable imperial porter but not a top tier one.

TASTE & TEXTURE: Matching the aroma, the vanillin is the first thing I notice but it doesn't quite sing like I'd hope in a bourbon barrel aged vanilla bean brew. Beyond the vanillin and some vaguely dark fruit-evocative barrel sugars, I don't really get much from the bourbon barrel...no rich white oak, no barrel char, no coconut, no whiskey warmth; I expected more from a 9 month barrel aged beer. Doesn't compare to Founders or Dark Horse in terms of bourbon barrel notes, let alone to great executions thereof from outside its state.

A bit coarser than I expected, with the lactose giving it an almost chewy texture when coupled with the barrel sugars and what tastes like a yeasty sludgy sediment (though it's not as unpleasant as that description makes it sound). Wet, unrefreshing. Thick but not syrupy. Has adequate weight on the palate. Adequately carbonated. Not oily, gushed, hot, boozy, or otherwise overtly problematic, but it could do without the sedimentary feel and it does seem a bit on the heavy side given its merely moderate depth and intensity of flavour.

I don't taste any cacao/cocoa nibs...just chocolate malt. The lactose sugar sweetness is indeed unnecessary as I feared, injecting added sweetness where the dark malt backbone offered enough. It's too far towards the sweet end of the spectrum for my taste as a result, but that's not to say it's egregiously imbalanced or a saccharine chore to drink.

I guess I just want more balance and more flavour. Some barrel char and roasted barley would go a long way towards balancing this out with needed bitterness, and I'd like to see them ditch the lactose sugar and consider coffee, chicory, or some other similar additive that would impart bitterness instead of sweetness. Cacao nibs are wasted on this and it isn't as expressive bourbon-wise as you'd expect in a 9 month barrel aged brew. Choose a better bourbon I guess, age it longer, and/or ask Founders how they work their miracles?

OVERALL: They don't really deliver on the premise...this tastes less like malted milk balls/Whoppers than many a stout and porter I've tried that wasn't going for that specific flavour. It can't hold a candle to Founders' bourbon barrel beers, it's too sweet (but still drinkable), and doesn't deliver the goods when it comes to its adjunct/additives. It does hide its ABV well, but I think they threw a bunch of shit at a shoddy base beer hoping it would stick and unfortunately additives, adjuncts, lactose sugar, and barrel aging can't make up for a lackluster foundation.

I'd sooner drink Victory At Sea, which is available in the more approachable and more reasonably priced 12 fl oz format, but this is not a bad beer by any stretch. Still, it's a letdown from Perrin.

Rated by Dustin_A_Stoutdrinker from Michigan

Reviewed by Wolvmar from Michigan

Going to make this short as my experience this time is very consistent with the prior review.
Pour isn’t very impressive this time. Very little head, slight lacin.
Definite bourbon presence even after more aging. But not overdone, just right at the limit I like. Still plenty of chocolate and maybe milder vanilla as it’s not bothering me this time.
Maybe a little less of a full mouthfeel; even a bit watery feeling.
This beer is worth trying if you like big, boozy, chocolate BA beer.

Fall 2018
Pour: bomber bought nearly a year ago (Fall 2017, I think). Poured into red solo cup :(. Dark brown, from what I could see. Nice tan head that lingers and left lots of lacing on the beautiful plastic cup.

Taste: big chocolate; more dark than milk. Big vanilla that mellows and sweetens but is a bit much for me. Whisky next in line and not shy either. Traces of molasses, caramel, oak, and plastic.

Overall: the plastic cup makes it tough to review. But, this is really big and good other than a bit to much vanilla for me. Would definitely try it agaIn, but in a proper vessel.

Pours a dark brown, somewhat opaque, with a half inch quickly dissipating head and spotty, soapy cling. It really does smell pretty much like a malted milk ball. Aromas of cocoa, lactose, vanilla, chocolate, malt, marshmallow, some brown sugar. Didn’t notice any bourbon barrel. The taste is similar, but not as candy- like. Flavors of chocolate, vanilla, light bourbon- a bit more as it warms, malt, less lactose than the nose, some cocoa, light caramel. Smooth, a good medium to full body- although a touch thin feeling, well carbonated.

Not bad, but had higher expectations for this. Has a very good aroma, but there’s a lack of depth in the flavor. Barrels were minimal, as well. One of the rare times I liked a stout/porter less as I worked through the bottle.

3.89/5  rDev -8.7%
look: 4 | smell: 4.25 | taste: 3.75 | feel: 3.75 | overall: 3.75
Thanks superspak. Record in NBS BIF #8
Dark brown, damn near black. Sandy to mocha colored head pushes nearly 2 fingers high, lingers, then slowly retreats to a thin cap. Little lacing.
Smell is lush. Combo of sweet: chocolate, caramel, fudge before it cools. Subtle roasted coffee comes through as well.
Taste follows in a more subdued way. As it warms you get a little more of the sweet flavors from the nose, but most of that is tapered by the roast, hints of wood, and the coffee notes. Hints of char, and maybe a smattering of bitter hops contribute to this drop in sweetness.
Mouthfeel is on the fuller side for a porter. Slight on the carbonation.
Overall, a very solid offering. I'd love it even more if the taste followed the nose more faithfully.

4.18/5  rDev -1.9%
look: 4.25 | smell: 4.25 | taste: 4 | feel: 4.5 | overall: 4.25
Poured a thick black with receding brown bubbles. Smell had that sweet malt aroma, really nailed that aspect, with some slight vanilla, bourbon, wood and chocolate. Taste had this sweet chocolate cereal complexion, good but not as candy like as expected. Feel though had wonderful malt work, smooth viscous booze, and a dark finish that was lasting. The wife loved this one
Dec 11, 2018
Rated: 4.35 by Giggy from Michigan

4.06/5  rDev -4.7%
look: 4 | smell: 4.25 | taste: 4 | feel: 4 | overall: 4
When fresh out of the fridge, this really nails the concept of a malted milk ball candy, with the classic mix of chocolate, malt, vanilla, milk, and nougat notes. Minimal barrel character when chilled, considering the alleged 9 months of ageing. More starts to emerge as the beer warms, but this is also where some of the candy elements start to break down, in favor of sharper alcohol notes. On the whole, I prefer it cold, but this is still a bit of a novelty. Moderately thin body.
Nov 20, 2018
Rated: 3.33 by pagriley from Illinois

Rated by Midwest_beersnob from Indiana