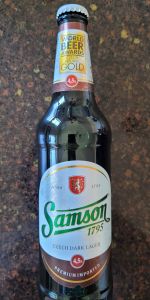 Poured out of a 16.9 oz bottle into one of my pint glasses, this beer pours a clear dark amber/light brown color with a tan head that's about an inch thick when first poured. Head settles to a thick film layer of surface foam along with a medium sized ring lining the inside of the glass. Decent lacing here. Aromas of roasted malts, caramel, and hints of chocolate and caramel. The taste is pretty much the same, with roasted malts, caramel, chocolate, and a hint of coffee all present along w/ a slight herbal hop presence. The flavors balance and compliment each other more as the beer warms up a bit. Has a fairly crisp, smooth, slightly frothy, medium bodied mouthfeel with fairly light carbonation. Has a clean finish and all the aforementioned flavors sit on my palate nicely for the aftertaste. Not bad at all.

Dark and clear. Smells like cocoa and roast. Kinda sweet with the aforementioned chocolate and roast along with coffee and caramel malt over a pretty standard clean lager. Really enjoyable stuff

Paragraph got deleted, so here’s the gist: RIP Ivan “Johnnie” Vrbetic, proprietor of Johnnie’s Lounge in the early 2000’s. Samson was the house beer until the end, and I got fond of it somehow. This is the dark version, tastier, cleaner, all around better than the old mistreated import version.

Dark brown, looks black with a ruby highlight in the glass. Ample tan head and lacing. Surface skim breaks and recedes to a thin ring.

Pours a dark chestnut brown color. Its actually clear when held to the light, but its not "see through" due to the dark hue of the beer. Thick pillowy tan head forms on the beer, lingers, then dissipates leaving a thin layer of foam on top of the beer.

Aroma has notes of cocoa, pumpernickel, toasted bread with a slight sweet cream character to the beer.

Taste follows the nose with notes of dark bread, pumpernickel, cocoa, a touch of sweetness, giving way to some spicy, herbal hops. There is a bit of a root beer-esque character to the flavor with the interplay between the spicy herbal hops and the sweetness. Its quite enjoyable.

Overall a very nice Czech dark lager. Not quite as impressive as their Czech pilsner, but this is also one I will certainly pick up again.

I couldn't tell the bottle was made of green glass because the beer is so dark. In the glass, however, Samson 1795 Original Czech Lager Dark isn't quite so opaque; the chestnut brown liquid is actually crystal clear and even shoots off amber highlights. Its head is creamy and perfectly proportioned.

The nose is equal parts cocoa, bread crusts and toasted nuts. It doesn't have the richness or roastiness of a stout or porter, and it lacks the sweet, fruity notes of a stronger beer, but it definitely has a little extra dimension to its maltiness. On certain whiffs it smells almost creamy.

Samson 1795 has a slightly metallic edge, likely the result of hard water (despite that Czech beers are notorious for their soft water). This slightly more alkaline profile gives a little edge to the otherwise delicately dark, medium-light toast, more milky chocolate malt flavour.

Nuttiness wedges its way into the finish like a car cutting off other drivers in rush hour; all the lightly caramelly but perfectly attenuated malt gives way in the finish to notions of toasted chestnut, pecan and the slightest dash of cocoa powder. It's not a flavour that lasts particularly long, but it's tasteful.

Samson 1795 Dark doesn't have a great rep on rating sites. Frankly, I don't know why not. I'd think its creamier, somewhat sweeter profile would make it more popular. Regardless, I liked it and wouldn't hesitate to put it forward as a better example of the style, at least among those we get in North America.

Or Tmavy Lezak 12° if you get it straight from the Czech Republic.
Pours a woody dark brown, small one finger head that lasts a little while, leaving just a thin lace afterwards.
Smells decent, bready, some sweet dark fruit esters, nuttiness, caramel.
Tastes the same. On the malty side, with toasted dark bread and some burnt sugar, just a bit sweet. Some dark fruit also, covered by some light roast notes towards the end, some faint cocoa powder, even some faint licorice. Low hop presence, as is the bitterness.
Light bodied, medium carbonation, kinda watery.
Not a heavy dark lager, not too sweet, falls into the "decent Tmavy" category.