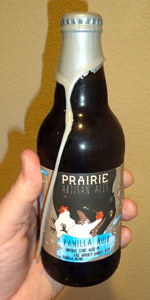 Hits upfront with whiskey--booze, caramel, coconut, tannins. Big sweet vanilla note, like vanilla icing on cake. Thick dark chocolate, leading into fudge, and then a slightly spicy blackstrap molasses and licorice note near the finish. The oak tannins cut through much of the sweetness, preventing it from being too cloying. A slight sweet stickiness lingers.

Medium-plus mouthfeel, light carbonation--isn't as thick as I thought it would be, but the very strong boozy barrel-aged stouts are often thinner in feel than their non-barrel-aged counterparts. Nevertheless, it finishes out sticky.

Great BBA imperial stout. A bit on the expensive side for a single bottle, but delicious nevertheless.

Reviewed by aBosslyElephant from Florida

Rated by Pete_Simpson from California

Reviewed by DvdP from Netherlands

Vanilla, chocolate, & barrel on the nose. A bit more booze on the palate, with the vanilla coming in nicely to cut through those oaky undertones. Could use a bit more body, but this one’s drinking pretty good.

Rated by MattDecker from Texas

Nose is oak and vanilla, with some leather, cherry

Nose carries forward into the taste, with a touch of whiskey.

Mostly oak and vanilla, with other supporting favors, well balanced,

S- plenty of barrel on the nose with aromas if wet oak, barrel juice and caramel. Chocolate and molasses intertwine with fruity aromas of dark cherry and raisin. Burnt tobacco and vanilla close it out

T- vanilla is noticed immediately up front, coming through more so than the nose. Mid-palate gives notes of chocolate, molasses, figs, raisins and cherries. The finish brings out the barrel, adding oak, bourbon and enhancing the vanilla, which sticks around at the linger

O- vanilla comes through nicely, complimenting the barrel notes throughout

Reviewed by jwp777 from Oklahoma

Pours a slightly shiny jet black color with a light tan head. Head retains around the circumference of the glass.

Smell: get ready for this one. Powerful aroma of mainly whisky with just a bit of vanilla. There is perhaps an afterthought of coffee there.

The taste delivers the booze promised in the aroma. Whisky, oak perhaps, and vanilla up front, followed by dark chocolate and coffee. The coffee bitterness is very pronounced, especially in the finish. Finish is long and bitter with remnants of booze and sweetness.

Feel is surprisingly smooth for such a boozy nose and palate. Each sip is a bit like a shot of whisky with some other stuff (makes me think of Scotch and Splenda, if you’re a fan of The Office).

Overall, a good stout. Personally the combination of booze and bitterness was too much, but I appreciate the complexity and the character the organic vanilla beans bring to the table.

Rated by grover37 from District of Columbia

4.24/5  rDev +1.2%
look: 4 | smell: 4.25 | taste: 4.25 | feel: 4.25 | overall: 4.25
A: The beer is jet black in color. It poured with a short mocha-colored head that quickly settled down, leaving a collar consisting of medium sized beige bubbles around the edge of the glass and some lacing on the surface.
S: Moderate aromas of whiskey are present in the nose along with hints of vanilla.
T: Like the smell, the taste follows the smell and has lots of flavors of whiskey along with notes to hints of vanilla beans.
M: It feels medium- to full-bodied on the palate and has a moderate amount of carbonation. The whiskey barrel aging lends warmth to the mouthfeel, particularly in its finish.
O: This stout has lots of nice aromas and flavors of whiskey and the addition of vanilla beans adds a bit of complexity to the smell and taste.

Rated by AZBeerDude72 from Arizona

Reviewed by NoYouDidnt from Indiana

3.89/5  rDev -7.2%
look: 4.5 | smell: 4.25 | taste: 4 | feel: 3 | overall: 3.5
Pours black with a finger head on aggressive pour. Aroma- chocolate, marshmallow, a little alcohol, cherry, vanilla, Taste- cherry, plum, tootsie roll, a little dark bread yeast, a little alcohol hint. Has a slight mint to it as well. The vanilla is there but certainly not smacking the face. Dark chocolate and a slight coffee bitterness. Mouthfeel- it is a little thin for being such a high octane beer. Overall- this is just a little too meek. I know that some vanilla beers are just absolute vanilla bombs and some barre aged beers are just blasting alcohol. This is just a little too light in those categories.
Apr 01, 2020

Glugs out of the bottle with a used motor oil appearance sitting black as pitch in the snifter. A fingernail of bubbly dark mocha head forms and quickly disappears, leaving a loose, airy, soapy collar with great retention - slowly deflating one bubble at a time. Zero visible effervescence.

Nose: This is one of those stouts you can smell from several feet away. Diving in, there is definitely a huge vanilla presence. Sticky, sweet vanilla beans lending an almost marshmallow note and vanilla icing. Plenty of roast, but it's not ultra dark or blackened, so there's no cherry, ashen, or acrid aromas to be found. As expected, the roasted malt lends plenty of cocoa, brownie batter a touch of cafe latte, and plenty of caramel which is accentuated by the vanilla. There is a metric TON of bourbon barrel in this. Fresh, wet, bourbon-soaked charred oak. Not only is there a massive barrel presence, but the bourbon itself just leaps out of the glass with potent oak, caramel, vanilla, brown sugar, molasses, and all the wonderful sweet bourbon aromas. There's plenty of heat from the near 14% ABV, which really highlights the bourbon note.

Palate: The beer greets the palate with an immediate sweetness and heavy vanilla presence. There is a healthy amount of roast, but the sweet vanilla really dominates, so there's essentially zero dryness, and instead of bitter roasty coffee and dark chocolate, the roast translates as brownie batter, milk chocolate, hot cocoa, with tons of vanilla bean, vanilla frosting, vanilla cake batter, Italian sweet cream, marshmallow, and some chocolate chip cookie dough. Heavy bourbon barrel presence, delivering both bourbon and barrel. The sweet vanilla aspect comes to a peak, and for a moment, comes across as an almost artificial vanilla flavour with. Slightly metallic artificial sweetness. It's very sweet, but not in a fishy way, but rather a too much sucralose or aspartame in your coffee way. This artificial vanilla/sweetener note lingers into the finish, where once again, there is just zero dry roasty bitterness. It's so vanilla saturated, that rather than finishing with cocoa, coffee, and blackened malt, the beer finishes with white chocolate, caramel, brown sugar, molasses, bourbon, and thankfully, some bourbon-soaked charred oak, which lends some much needed tannic dryness.

Mouthfeel/Body: For what this beer is - a huge bourbon barrel-aged vanilla imperial stout, the body is a touch thin. Now, this thinner body paired with essentially zero cherry bitterness results in this being insanely drinkable for 13.7% ABV. It isn't a thin beer by any stretch - it's sweet, sticky, and full-bodied, but it lacks the viscosity of many other big stouts. Effervescence is naturally on the low side, and very fine in nature. Some ABV heat is evident, particularly in the swallow.

Overall: This is a truly outstanding barrel aged stout with vanilla. Despite my notes on the artificial vanilla/artificial sweetener note, make no mistake, the vanilla beans in this are 100% natural. In fact, they're organic. Often times, but stouts with insane amounts of vanilla will take on that artificial note. It just shows they didn't skimp on the beans. Yes, it's a touch thin, and yes, the vanilla could be a little more floral, but even as it stands, this is an absolute home run. Incredible bourbon barrel presence, no shortage of vanilla, and drinks like an alcoholic dessert. Pricey, but if you like vanills stouts, don't sleep on this one.

4.43/5  rDev +5.7%
look: 4.25 | smell: 4.25 | taste: 4.5 | feel: 4.5 | overall: 4.5
From the 12 oz bottle in a snifter. This beautiful beast pours a
luscious coal black with a rich brown head that settles to a thick ring
with subtle lacing. Nose of vanilla, mild coffee, rich cocoa, spicy whiskey,
and light oak. Flavors hit the note. Whiskey and cocoa to the fore; spicy
and sweet notes overflowing with fudge and brown sugar. Mild coffee
and cream meld nicely with brulee and moderate char and cascade over
warming booze. Excellent mouth feel; full body, smooth, slick, lightly
coating, and finishing warm and vanilla sweet with a hint of dryness.

Overall----another WOW and perhaps the biggest WOW I have had
from the good Prairie folk......excellence....PERIOD!

Nose: Very vanilla and bourbon forward with a hint of cocoa powder.

Tase: Follows the nose - vanilla and bourbon with a subtle malt/cocoa base. Not much alcohol heat.