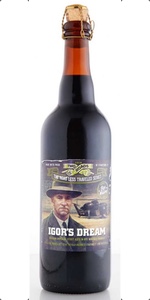 Notes: In honor of Stratford’s aviation pioneer Igor Sikorsky, we’ve created this most unorthodox Russian Imperial Stout. Made with rye and aged in oak whiskey barrels that give it a depth of character like no other, we think Igor would be pleased with the attention to detail in our creation.
View: Beers | Place Reviews
Reviews: 34 | Ratings: 216 | Log in to view all ratings and sort

T: Whiskey (lots of it), alcohol (tons of it), chocolate. For the deep winters in Siberia, I guess...

O: A STRONG, whiskey-filled Russian imperial stout. Not for the faint of heart.

Tried this at Eli Cannon's in Middletown, CT. Came in a tulip glass with about a quarter inch of head leaving behind a minor amount of lacing. The color is dark chocolate and the aroma is pretty much the same. The taste is definitely boozy, but the roasted notes are there and definitely present. There are also chocolate notes in the background. Nice stout.

Poured a black body with minimal head that died quick. The aroma is hearty with notes of roasted coffee, wood and hints of booze. The booziness comes through in the beer but it is mild and not overpowering, there is some smoothness coming from wood notes and there is a touch of sweet malts like bitter chocolate and vanilla along with a roasted edge at times.

Poured into a tulip glass from a growler can that was 6 weeks old. Dark black/brown with a generous head that looks like it should be on a rootbeer float. Very attractive. The bubbles in the head are a bit larger than most. The smell is nothing special. First sip is delicious. You can taste the rye without it competing with the base beer, Not too roasty, sweet or coffee forward. Decent lacing with some head retention. A very well balanced stout with a hot finish. The mouthfeel is just thick enough and it is sticky on the lips. When I swallow a sip I am getting a pleasing sweet taste of roasted malty goodness that leaves a slightly bitter rye whiskey finish. I love it...... but I am partial a boozy stout and rye whiskey.

raft at Pennsport. Dark as night with lasting beige creamy head. Aroma is subtle, mild sweetness. Taste brings stronger bitterness, chocolate, some lacto. Smooth and creamy. Not any sign of the barrels, but super tasty.

There's nothing like some rye on rye action to get the party started. And Two Road's dream of a stout uses a combination of rye grains, rye whisky barrels and a subtle hint of spruce for balance and interest.

Igor's Dream pours jet black and with a hardened opaque exterior. Its boisterous tan head floats the rim and brandishes the nose with char, toast, smoke and whisky. A tingle of pepper draws the senses closer while its taste is robust and sweet with molasses, cocoa and cream.

Saturating the tastebuds with its sweet char, the middle palate brings a bittersweet, smoky chocolate flavor with expresso, burnt toast, black walnut and burnt cream. Hints of vanilla lead to a slightness of grilled cherry, grape and licorice dive into a spicy finish of oak, whisky, husky, caramel, peppercorn and juniper.

A late palate of woodsy bitterness is moderately resinous with pine cone, smoldering embers and a tannic balance to assist the hops in offsetting the lingering sweetness. Full bodied but offering a sense of roast and oak derived dryness, the stout is decadent and palatable, right down to its long and gritty linger.

Head retention is impressive, and the aroma is more of the oak. Very easy drinking, but the barrel is more apparent than the malt, just a bit boring for me

Pours a deep dark brown. The head is big and soft with little retention.
Nose is roasty with lots of whiskey notes followed by espresso beans. Taste is roasty and oaky. Lots of very bitter black coffee with some milk chocolate covered cherries. There's a lot of whiskey flavor but very low heat for the ABV.
This comes in squarely on the thin side. I prefer much more viscosity in a big stout. Carbonation is very high. Decent stout overall but it has it's flaws. Too thin. Too bitter. Too much carbonation. Some nice whiskey notes though and it's a bit of a change of pace from your typical barrel-aged stout.

don't get me wrong...a good beer but i personally would prefer them to be a bit sweeter & fuller. had a 5 year vertical (13' - 17') at the source on igor day. each year was on the thinner side. 13' & 14' were very smooth, roasty in flavor w/ a mild barrel character. the 15' had the the whiskey bite and was the best overall imo. 16' & 17' were hot. glad to finally tick these and am looking forward to this years armagnac variant!

got a growler fill of this today. poured into a snifter, black with a mocha head.

whiskey and oak on the nose, also some light raisin and slightly sweet berry notes as it warms. on the palate getting dark roasty malts, light caramel, smooth chocolate and bitter coffee, wood and a nice touch of whiskey. decent mouthfeel, could be thicker but no major complaints.

overall really glad I tried this one, definitely showcases some intresting flavors that go well together. not the sweetest stout which I appreciate for a nice change of pace. only complaint would be I thought the alcohol became a bit overpowering and astringent as it warmed ... maybe I just prefer bourbon barrels over whiskey barrels.

Bottling from last year. 750 ml corked and caged bottle numbered #254 poured into a tulip. The brew appears black in color with a big khaki head that fades leaving stringy to patchy lace.

This smells of citrus and is quite roasty with a little mineral bite. Some fruity to solvent alcohol is evident.

It tastes quite dry and roasty/bitter with strong coffee, char, earth, tobacco and a touch of citrus hops. Plenty of layers of bitterness to this, mostly coming from the char of the grain than anything.

This is medium to light in body with moderate carbonation. The rye whiskey barrel influence is muted and honestly its a bit disappointing that it isnt more evident. This brew is all about the acrid char/roasty bitterness (which isnt a bad thing) but I guess I was just expecting/wanting more out of it.

Dark brown color where no light can pass even on the edge. Moderate head which leaves a couple of streaks on the glass.

Dry darker malt aroma with a touch of berry. More notable for what I don't smell: chocolate or coffee.

Traditional darker malt start but I'm surprised what I'd call a Kool-Ade if I'm crass, black current if I'm sophisticated. The body leans light and the carbonation leans high. Long lasting cocoa aftertaste, which is odd since I didn't get much on the initial sip. Deceptively, I get very little alcohol warmth.

Poured from draft line into 12 oz modified pils glass.
A - Supremely dark, a thin mocha cap acts as the sentry.
S - Toffee,cocoa, sweet bourbon element.
T - Bakers chocolate, fig, raisin, and a bit of alchohol.
M - Silky on the palate, carbonation has a hard time cleaning up this full body.
O - A big and seductive offering, the body and breath are full and enriching.

On tap at York River Landing.
Black in color. Small tan head.
Aroma equal parts roasted malt and booze.
Whiskey, espresso, and bittersweet taste.
Too hot for me. The alcohol shouldn't be the predominant taste.

On tap at City Beer Hall in Albany, NY.

This one pours a dark black, with a tight mocha-colored head, and a little bit of lacing.

This is surprisingly roasty and bitter for a barrel-aged stout- not much sweetness. It's pretty nutty, and very roasty, with some chocolate, toasty oak, and just a slight amount of bourbon. This is really unique when it comes to barrel-aged stouts, and I enjoy it.

This is medium bodied, pretty chewy and nice, with a normal level of carbonation.

Taste: barrel, chocolate, toffee, coffee, and I want to say some sort of nuts, peanuts, something, not quite sure. The barrel flavor is smooth to me, its middle of the road. Not in your face pungent, but you also have no problem picking it up in both aroma and taste. Get this!

For a bourbon barrel aged beer, this was actually a bit more subtle than I expected. More regular RIS than BA RIS, the whiskey and barrel qualities are definitely present, but far from over-powering.

Chocolatey and smooth. A little on the boozy side.

I enjoyed this beer a lot initially, but I would have a hard time having more than one. Definitely rich and big.

This is a hot beer. And by hot I mean the alcohol fumes aren't hiding anywhere! Big ass in your face Russian imperial. The roast notes are assertive, I get a dark sort of espresso like character in the aroma. Chocolate notes are of the decidedly bittersweet variety. No fudge bomb here.

A- Pours jet black with a proud, 1+ finger mocha colored head with remarkable retention, especially considering the 10.9% ABV. What's not to like, so lets move on! (4.5)

S- Wow...they must have been freshly dumped because the barrel characteristics are massive, nearly overpowering the base beer. Oak, Vanilla and Rye Whiskey dominate with Chocolate and Coffee from the beer trailing behind. If you like barrel in your Imperial Stout, this is the one! (5.0)

T- Like the nose, the flavor is very barrel-forward with flavors of oak tannin and spicy rye whiskey with the beer providing enough flavors of bittersweet chocolate and coffee along with an aggressive espresso bean astringency. (4.25)

M- The carbonation is very strong (almost prickly) and is enough to maintain a substantial layer of film throughout consumption. As evidence by the substantial head on initial pour, the body is only medium and much less viscous than other 10%+ ABV Imperial Stouts. However, the lighter body increases its drinkability to the point that I find my hand grabbing for the glass way too often! (4.25)

O- Although I prefer Bourbon Whiskey to Rye Whiskey, I love barrel-aged beers (regardless of type of barrels used) and Igor's Dream delivers in spades. Although, I prefer Imperial Stouts with a bit more body and a less astringent finish, Igor's Dream is still a pleasure to drink and showcases great execution of barrel-aging. (4.5)

Draught @ Black Eyed Sally’s: This one pours an opaque, very dark brown color. There was just a bit of a tan head o it and it left some lacing. Nice nose. Some chocolate, roastiness, a touch of rye. The taste is also pretty good. Chocolate malts, a touch of sweetness, a bit of hop bitterness, and some of the rye. A nice brew.

A: The beer is a deep black color, with a short brown head that fades slowly and leaves a thin lace on the glass.

S: The aroma is faint but contains roasted malts, some chocolate and a touch of hops.

T: The taste starts out with a bitter-sweet flavor of dark chocolate. Then a hearty but not too heavy roasted malt character comes in. The hops presence is mild but complementary and brings a very good balance. The after-taste is bitter-sweet.

O: Very tasty, goes down easily, not too filling, strong kick, good representation of style, this is a very good big stout to drink for a long time.

Igor's Dream from Two Roads Brewing Company
Beer rating: 90 out of 100 with 216 ratings